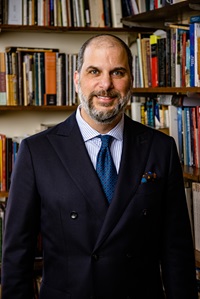 David Caplan is the Daisy Deane Frensley Chair in English Literature and the author of seven books of literary criticism and poetry. Previously he served as the Charles M. Weis Professor of English at Ohio Wesleyan University.

His main research areas are poetry, poetics, and American literature. He has presented his research and given poetry readings in Belgium, Canada, Ireland, Israel, Italy, Germany, and Portugal, and his scholarship has been translated into French and Urdu. He is a contributing editor to Pleiades and the Virginia Quarterly Review, an Affiliated Researcher (Chercheur Affilié) with the Centre Interdisciplinaire de Poétique Appliquée, and an Affiliated Professor with the University of Haifa. His other professional activities include serving as a member of the Executive Committee of the Modern Language Association's Creative Writing Forum. He chaired the forum from 2020-2021.

Caplan co-coedited a special issue of Virginia Quarterly Review devoted to American Poetry (Spring 2012) that was recommended in New York Times, “Whom and What to Read to Make You Like Poetry (and Also Sci-Fi),” and Book Riot, “The Best Books We Read in February.” The 2013 Best American Poetry included two of the poems from the issue and one poem from it was awarded a Pushcart Prize.