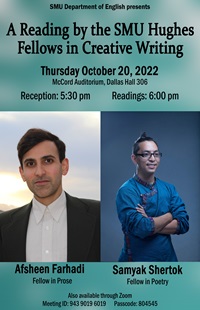 A Reading by the SMU Hughes Fellows in Creative Writing 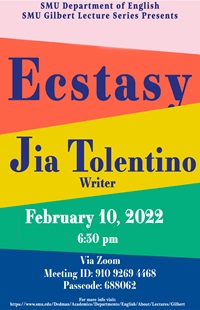 Abstract: Jia Tolentino reads from an essay about ecstasy as the link between virtue and vice, drugs and religion, and answers questions about the writing process.

Bio: Jia Tolentino is a staff writer at the New Yorker and the author of the essay collection Trick Mirror. Formerly, she was the deputy editor at Jezebel and a contributing editor at the Hairpin. She grew up in Texas, received her undergraduate degree at the University of Virginia, and got her MFA in fiction from the University of Michigan. In 2020, she received a Whiting Award as well as the Jeannette Haien Ballard Prize. Her work has also appeared in the New York Times Magazine and Pitchfork, among other places. 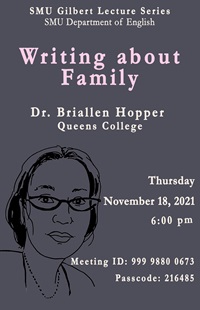 Abstract: “The family,” Dodie Smith writes, “that dear octopus from whose tentacles we never quite escape, nor, in our inmost hearts, ever quite wish to.” Much of the literature we encounter is in some sense writing about family—an attempt to represent and/or maneuver between real or imagined familial tentacles. This talk focuses specifically on contemporary creative nonfiction, and the flourishing genres of essays and memoir about family such as Alison Bechdel’s Fun Home and Kiese Laymon’s Heavy. What are some of the motivations, preconditions, ethical considerations, and practical challenges involved in writing about one’s own family? What forms and methods do writers use and why? And what does this kind of writing have to teach us about the relational nature of creative work?

Bio: Dr. Briallen Hopper is the author of Hard to Love: Essays and Confessions (Bloomsbury, 2019), a Kirkus Best Book of the Year, CBC Best International Nonfiction Book of the Year, and finalist for the Washington State Book Award. Her essays have appeared in Los Angeles Review of Books, The New Republic, New York Magazine/The Cut, The Paris Review, the Washington Post, and elsewhere. She is co-editor-in-chief of the online religion and culture magazine Killing the Buddha and a contributing editor at the independent press And Other Stories. She teaches creative nonfiction in the MFA program at Queens College, CUNY, where she is Assistant Professor at English. 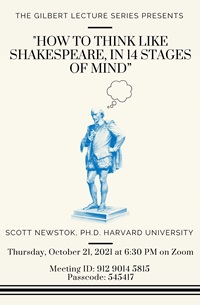 Title: How to Think Like Shakespeare, in 14 Stages of Mind

Abstract: The educational assumptions that shaped Shakespeare were strikingly at odds from our own. Yet thinkers trained in this unyielding system generated world-shifting insights, founding fields of knowledge that we still study. Thinking like Shakespeare disentangles a whole host of today’s confused educational binaries. We now act as if work precludes play; imitation impedes creativity; tradition stifles autonomy; constraint limits innovation; discipline somehow contradicts freedom; engagement with what is past and foreign occludes what is present and native. Yet Shakespeare’s era delighted in exposing these kinds of dilemmas as false: play emerges through work; creativity through imitation; autonomy through tradition; innovation through constraints; freedom through discipline. It’s by revivifying the foreign country of the past that we can make the present our own.

Bio: Dr. Scott Newstok is a Professor of English at Rhodes College and is the Director of the Pearce Shakespeare Endowment. He teaches literature of the English Renaissance as well as film, rhetoric, education, lyric poetry, and the humanities. Professor Newstok has received the 2012 Campus Life Award for Outstanding Faculty Member; the 2016 Clarence Day Award for Outstanding Teaching; and the 2021 Clarence Day Award for Outstanding Research and Creative Activity. Dr. Newstok has published five books: a scholarly edition of Kenneth Burke′s Shakespeare criticism; a collection of essays on Macbeth and race (co-edited with Ayanna Thompson); a monograph on early modern English epitaphs; an edition of Michael Cavanagh's Paradise Lost: A Primer (CUAP 2020); and How to Think Like Shakespeare (Princeton, 2020).

Abstract: "Tiling, Lining Notes" and Tilling, Limning Notes" are two poems written in response to great artists - the extraordinary saxophonist and composer Sam Rivers and the great painter Jack Whitten. They are linked by their co-presence in the downtown New York art world in the 1970s, by their commitment to black aesthetic experimentation. Both poems attempt to extend that commitment and to draw some parallels between music, painting, criticism and city life.

Bio: Fred Moten is Professor in the Department of Performance Studies, Tisch School of the Arts. He holds an A.B. from Harvard and a Ph. D from the University of California, Berkeley. Moten teaches courses and conducts research in black studies, performance studies, poetics and critical theory. He is author of In the Break: The Aesthetics of the Black Radical Tradition (University of Minnesota Press, 2003); Hughson’s Tavern (Leon Works, 2009); B. Jenkins (Duke University Press, 2010); The Feel Trio (Letter Machine Editions, 2014), The Little Edges (Wesleyan University Press, 2015), The Service Porch(Letter Machine Editions, 2016), a three-volume collection of essays whose general title is consent not to be a single being (Duke University Press, 2017, 2018) and All that Beauty (Letter Machine Editions, 2019). Moten is also co-author, with Stefano Harney, of The Undercommons: Fugitive Planning and Black Study (Minor Compositions/Autonomedia, 2013) and A Poetics of the Undercommons (Sputnik and Fizzle, 2016) and, with Wu Tsang, of Who touched me? (If I Can’t Dance, I Don't Want to be Part of Your Revolution, 2016). Moten has served on the editorial boards of Callaloo, Discourse, American Quarterly and Social Text; as a member of the Critical Theory Institute at the University of California, Irvine; on the board of directors of the Center for Lesbian and Gay Studies, City University of New York; and on the advisory board of Issues in Critical Investigation, Vanderbilt University.

Title: Profaning the Passions: Modern Drama After the Anti-Christ

Abstract: This talk examines modern reinventions of the passion play, showing how this genre facilitated far-reaching artistic experiments on twentieth-century stages. Playwrights including Yeats, Djuna Barnes, and Sadakichi Hartmann harnessed this form to reconsecrate the theater for aesthetic inquiry, while disrupting secular humanist narratives that had prevailed over the bourgeois theater.

Bio: Dr. Kastleman is a research professor from Southern Methodist University. Her scholarship tracks the global trajectories of modern theater and performance, with an emphasis on British and American drama in the twentieth and twenty-first centuries. Her work has appeared in venues including Theatre Journal, Modern Drama, Theatre History Studies, American Theatre, The Year's Work in Critical and Cultural Theory, and Modernism/modernity Print Plus.

Bio: Gaitskill’s honors include a Guggenheim Fellowship in 2002 and a PEN/Faulkner Award nomination for Because They Wanted To in 1998. Veronica (2005) was a National Book Award finalist, as well as a National Book Critics Circle finalist for that year. Her story “Secretary” was the basis for the film of the same name and her most recent work, “This is Pleasure,” a long short story about the #MeToo movement that first appeared in The New Yorker, was recently published by Pantheon

Gaitskill has taught at UC Berkeley, the University of Houston, New York University, The New School, Brown University, in the MFA program at Temple University[4] and Syracuse University. She was the Writer-In-Residence at Hobart and William Smith Colleges. As of 2020, Gaitskill is a visiting professor of literature at Claremont McKenna College.

Title:“Am I a Soldier?”: Photography and Identity in World War I African American Poetry

Abstract:Walter E. Seward’s recently recoveredNegroes Call to the Colors and Soldiers Camp-life Poems(1919) depicts black soldiers’ experiences during WWI. This talk carves out a place for Seward’s work within the African American literary tradition and examines how his multidimensional use of photography and poetry posits black identity and life into the national consciousness.

Who Stole the Planet?: Colonization, Capital, and Enslavement

Abstract: Capital and colonization dominate hierarchies of power and compel widespread destruction up to today, but they do not do so uncontested. Chicana/x writings, over a long period of time that dates to the overlapping temporalities of Mexican American, mestiza/x, and indigenous eras, make this contestation visible.

Tilling the Wings: Poems from Tractors and Sandhill Cranes

Abstract: Abraham Smith is the author of five poetry collections--Destruction of Man (Third Man Books, 2018); Ashagalomancy (Action Books, 2015); Only Jesus Could Icefish in Summer (Action Books, 2014); Hank (Action Books, 2010); and Whim Man Mammon (Action Books, 2007)--and one coauthored fiction collection, Tuskaloosa Kills (Spork Press, 2018). In 2015, he released Hick Poetics (Lost Roads Press), a co-edited anthology of contemporary rural American poetry and related essays. His creative work has been recognized with fellowships from the Fine Arts Work Center, Provincetown, MA, and the Alabama State Council on the Arts. He lives in Ogden, Utah, where he is Assistant Professor of English at Weber State University.