Many fill church organist positions while pursuing their degrees

Ever since his 2014 arrival from Leipzig, Germany, Meadows’ Leah Young Fullinwider Centennial Chair in Music Performance and Professor of Organ Stefan Engels has worked to establish relationships with several Dallas churches so that his students can widen their career opportunities. His efforts have reaped rewards: All of Engels’ current and former students hold part-time or full-time positions as church organists and music directors.

“The experiences my students have had with their church positions in Dallas have been most valuable,” says Engels. “Financially it is important for them to have the income from these jobs but, of course, artistically and musically, it is, on many different levels, very beneficial for them to be employed while they are in school.”

As the reputation of the organ program at Meadows grows, Engels is fielding more calls from church music directors seeking to hire his students. “In the last two years, directors of music have come to me and told me they really want to have a student from the SMU organ program as an organ scholar or as an assistant or associate organist,” he says. 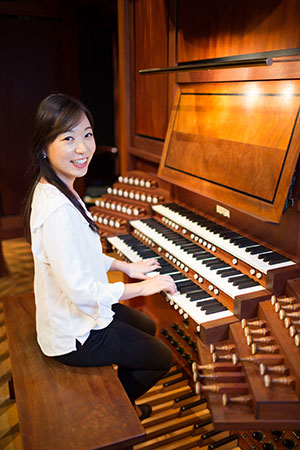 Engels’ protégés can be found from Texas to Canada, including local positions in the lofts of the Church of the Transfiguration, Church of the Incarnation, Highland Park United Methodist Church, St. Thomas Aquinas R.C. Church, Preston Hollow Presbyterian Church and more.

“I found Professor Engels to be an attentive teacher, who was mindful of my needs as a working church musician while also pushing me to grow through the music I studied,” says 2017 Master of Sacred Music summa cum laude alumnus Joshua Zentner-Barrett, organist and music director at Kanata United Church in Ottawa, Ontario. “He was the kind of teacher for whom I wanted to work hard, who saw all the angles of being an organist (not just the playing), and who was supportive outside the studio environment. He undoubtedly did help me in my career because he allowed me work on repertoire suited to my career goals and didn't force me down a concert/performance path.”

In addition to a robust music program, multiple beautiful organs on which to play and employment opportunities, Engels believes that Dallas itself is a plus. Home to the country’s largest contiguous arts district, Dallas provides opportunities for students to hear and interact with the Dallas Symphony (of which several Meadows faculty are members), Dallas Opera (the CEO of which is an SMU Meadows alumnus), Dallas Chamber Music Society and more, as well as enjoy master classes on campus from organists such as Olivier Latry, Janette Fishell, Ken Cowan and others.

Engels’ background and training also bring added facets and influences to the program. Born in Germany and educated in Germany and the U.S. (he received his Artist Certificate from SMU Meadows in 1995), Engels joined the faculty of SMU from one of Europe’s oldest and most prestigious musical institutions, the University of Music and Performing Arts “Felix Mendelssohn Bartholdy” in Leipzig, Germany, where he had served as professor of organ from 2005 until 2015. Prior to that he was associate professor of organ and chair of the organ department at Westminster Choir College in Princeton, N.J., from 1999 to 2005. Over a 12-year period, he recorded a 15-CD set of the complete organ works of late-Romantic German composer Sigfrid Karg-Elert, becoming the first organist in the world to do so. The CDs, released on the Priory label, have been reviewed to the highest international critical acclaim: “… this series will surely stand as the greatest project the gramophone has achieved in organ music for very many years…” (Choir & Organ); “ … some of the most creative and complex organ music ever written has been released by Priory in this groundbreaking series of Karg-Elert’s complete organ works … there is much to marvel at here …” (prestoclassical.co.uk)

Read about graduate admissions for SMU Division of Music.

In addition to completing coursework, polishing their repertoire and performing in concerts, all of Engels’ students are employed part-time or full-time as organists at churches. Click on the links below to learn more about SMU Meadows organ students and alumni.

Joshua Boyd (M.M. Organ Performance ’19) is an organ scholar at Church of the Incarnation in Dallas.

Nicholas Halbert (M.M. Organ Performance ’19) is an organ scholar at the Church of the Transfiguration in Dallas. Previous employment as a teen was as a boy chorister at St. Paul’s Cathedral in San Diego, then as organ scholar (age 16), a position he held for two years.

Graham Schultz (Performer’s Diploma/Organ Performance ’19) is assistant organist at the Church of the Incarnation in Dallas. He holds a Bachelor of Music in organ performance from the Cleveland Institute of Music. While in Cleveland, he was organist and choirmaster of St. James, E. 55th, where he oversaw a professional music program in the Anglo-Catholic tradition.

Jordan Smith (Master of Sacred Music ’18) is director of music and organist at Christ the Servant Lutheran Church (ELCA) in Allen, Texas. There, he conducts the chancel and handbell choirs, assists and oversees the children’s music program, accompanies worship services and maintains the church's concert series.

Richard Gray (M.M. Organ Performance ’17) currently serves as the 2017-18 organ scholar of St. George’s Episcopal Church in Nashville, Tenn. During his time at SMU, he was engaged as an organist at Highland Park Presbyterian Church in Dallas. In addition to his service playing responsibilities, he enjoyed collaborations as an accompanist for the Highland Park Chorale and Chancel Choir, both in worship services and on performances. Other previous positions include assistant course organist and conducting scholar for the Royal School of Church Music in America’s Carolina Course in Raleigh, N.C.; sacred music intern at Bradley Hills Presbyterian Church in Bethesda, Md.; and at First Baptist Church in Worcester, Mass.

Dr. Jonathan M. Gregoire (Artist Diploma/Organ Performance ’17) is senior organist and curator for St. Andrew United Methodist Church in Plano and director of the church’s academy of music. He has expanded the music program by establishing an annual spring organ recital series at St. Andrew, drawing audiences from both the church and the greater community.

Scott Scheetz (Master of Sacred Music ’17) is music minister and organist at Crown of Life Lutheran Church in Colleyville, Texas, where he directs the adult, youth, children’s and handbell choirs and leads both traditional and contemporary worship.

Wilhelm Sollie (Performer’s Diploma/Organ Performance ’17) was assistant organist at The Episcopal Church of the Transfiguration in Dallas. From 2012 to 2014 he was organist at the Castle Church at Akershus Fortress (Akershus Slottskirke) in Oslo, where he led the musical activities. His duties also included playing at services for His Majesty Harald V, the King of Norway.

Joshua Zentner-Barrett (Master of Sacred Music ’17) is organist and music director at Kanata United Church in Ottawa, Ontario. He is also accompanist for the three choirs of Ottawa’s Goulbourn Jubilee Singers and director of the New Edinburgh Adult Global Song Choir.