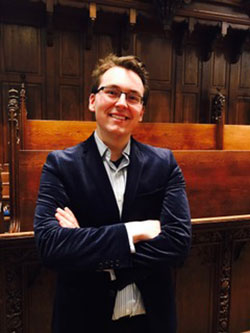 “He launched into the program with energy and confidence… masterfully played… Boyd’s fine performance proved that he deserved a hearing…” - The Diapason Joshua Boyd began studying piano at the age of nine in the small town of Mars Hill, North Carolina. When his family moved to South Carolina he studied piano and organ with Fran Pinson. In 2009 he was accepted into the piano department of Dr. Stephen Taylor at the South Carolina Governor's School for the Arts and Humanities. He was graduated from the University of Michigan in 2015 with a degree in organ performance where he frequently performed with the University’s Symphony Orchestra, University Philharmonia Orchestra, and University Choirs. His private instructors have been Dr. Marilyn Mason, Dr. Timothy Tikker, Dr. Karl Schrock, and Dr. James Kibbie. He has performed in many venues across the United States including the Kennedy Center for the Performing Arts as part of their Conservatory Project concert series and The Basilica of the National Shrine of the Immaculate Conception. Joshua has been featured on the radio broadcast PIPEDREAMS produced by American Public Media in a recital given at Hill Auditorium in Ann Arbor, MI. In 2017 he was the organist for the first performance of Handel’s Messiah given by the Early Music Festival of Detroit. Recently, Joshua was chosen to participate in the first Longwood Gardens Organ Academy for a week of masterclasses and private coachings with the world’s foremost authorities in transcriptions and orchestral playing. Currently, he is the organ scholar at Church of the Incarnation in Dallas, TX and a Master’s Degree student at Southern Methodist University in the studio of Stefan Engels.