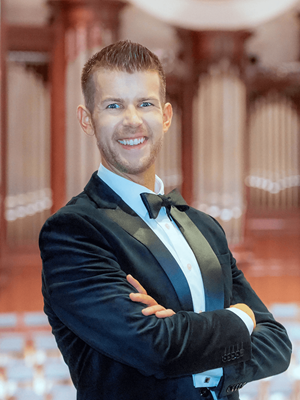 Praised for his "top-notch technique and musicianship" by the Dallas Morning News, Jonathan M.  Gregoire is an imaginative organist, pianist, and advocate for the power music has to transform lives. Gregoire brings his passion for music, intuitive gifts for healing powers of the arts, and warm charisma to his creative output as a soloist, collaborative artist, and arts educator.

As a soloist, his engaging performances are praised for their “unfailing drive, energy, and expression,” with equal parts style and flair. He has performed for national conventions and other featured events, with international performances in the Netherlands, France, Russia, and Germany. A noted prizewinner, Gregoire was the winner of the 2017 Southern Methodist University Concerto Competition, a finalist in the 2014 Pistoia International Organ Competition in Italy, and a Diploma Laureate in the 2013 Mikael Tariverdiev International Organ Competition in Kaliningrad. Several of his performances can be heard on Pipedreams from American Public Media. As a supporter of new music for the instrument, he has performed world premieres of works by Henry Martin, Douglas Pew, and Carol Barnett.

As a collaborative artist, his elegance and facility at both the piano and the organ are further augmented by his sensitivity and innate ability to support and lead from the keyboard. He supports congregational and choral singing as the organist at St. Andrew United Methodist Church in Plano, Texas Texas, where he curates the Létourneau, Op. 87. Gregoire is the organist for the Plano Symphony Orchestra and regularly plays for various musical and educational organization throughout the Dallas metroplex.

As an educator, Gregoire is driven by the belief that through education we promote understanding, and with understanding we foster appreciation. With this belief, he founded and serves as the Executive Director of the Arts Foundation of St. Andrew, which is dedicated to “enriching spirituality through the power of the arts.” Through music education, community outreach, and visual, literary, and performing arts initiatives, the Arts Foundation is developing artistic haven in the Dallas metroplex. Additionally, he serves as faculty accompanist for the Greenhill School in Addison and Plano West Senior High School, nurturing a love for music in the lives of students and choirs he supports.

Gregoire’s own rich educational background was fostered by his grandfather’s unfaltering belief in education as the core to one’s identity which can never be taken away. Gregoire received his D.M.A. in Organ Performance from Arizona State Unviersity, where his final project, “Toward a ‘Green’ Organ: Sustainability and Organ Building” combined a personal passion and school-sponsored initiative of sustainability in assessing methods organ builders use to directly and indirectly promote sustainable practices in organ building. Gregoire also pursued post-doctoral studies as a student of Professor Stefan Engels at Southern Methodist University in the highly selective Artist Diploma program, where he was awarded the Roy and Sue Johnson Award in Organ or Sacred Music in Memory of Robert T. Anderson, which recognizes outstanding achievement in the department.

Gregoire holds additional degrees in organ performance from the University of Kansas (M.M.), where he was inducted into the prestigious Phi Kappa Phi and Golden Key International Honor Society; St. John’s University (B.A. summa cum laude), where he was named a Presser Scholar, which is given to one student each year by the music faculty for exceptional work within the department; and his high school diploma from the Interlochen Arts Academy, where he graduated Salutatorian and received the coveted Young Artist Award as well as Academic Awards in Mathematics and Chemistry, and as a noted alum, he was a featured performer for the Interlochen Arts Academy’s 50th Anniversary Collage Concert. His instructors include Dr. Kimberly Marshall, Dr. James Higdon, Dr. Michael Bauer, Dr. Kim Kasling, and Mr. Thomas Bara.