For two years he was student YMCA secretary at Oklahoma A&M College in Stillwater, Oklanhoma. He then became assistant registrar at Southwestern University as well as manager of the boys’ dormitory. He moved to Dallas in 1917 to work for the State Committee of the YMCA.

He was survived by his wife,  (no SMU degrees for her could be found) and his daughter, Elizabeth Brewer Mooty, a 1939 SMU graduate. Mrs. Booty currently lives in Lynchburg, Virginia

The Dallas Morning News obituary on January 13, 1949, is noted below: 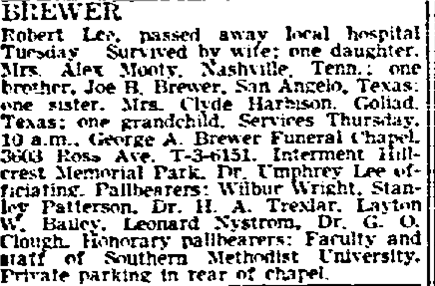