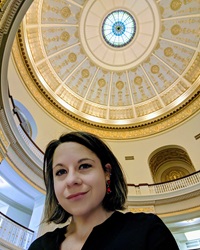 Brentney Hamilton received her B.A. in English with a specialization in Creative Writing from SMU in 2007. During her tenure as a Mustang, she won the Margaret Terry Crooks Award and the Lon Tinkle Scholarship while studying under the mentorship of Professor Emeritus C.W. Smith. Another academic passion, developed under the mentorship of Dr. Mark Chancey, inspired her to pursue graduate work at Harvard Divinity School where she studied Religion, Ethics, and Politics and earned her Masters of Theological Studies in 2009. Before teaching writing at SMU, she worked on the other side of the editor’s desk as an arts reporter for The Dallas Morning News.