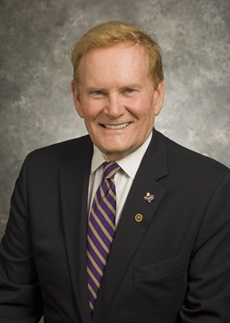 A leader in the financial services industry for more than four decades, C.J. “Don” Donnally, Jr. ’67, ’68 championed students and the SMU community as a longtime supporter, volunteer and mentor.

Perhaps his most enduring role was as a nationally recognized member of the Sigma Alpha Epsilon (SAE) fraternity, which he served through active fundraising and as a chapter advisor since 1973. He volunteered hundreds of hours to mentor more than 2,000 students over the years.

The son of SMU alumni, he earned a BBA in finance in 1967 and an MBA in 1968. While a student, he joined SAE and the Brotherhood of Cycen Fjodr, the oldest senior society of its kind at SMU. He also played on the Colts men’s basketball team.

After graduating from SMU, he began his career at Smith Barney, where he formed The Donnally Greenman Group. He served as a senior vice president of the group, which joined UBS Financial Services in 2015, where he was a senior vice president of wealth management and a senior portfolio manager. Donnally was recognized regularly as being among the Top Financial Advisors in the industry by Barron’s financial newspaper.

Throughout his life, Donnally maintained close ties to SMU. Beginning in 1979, he supported causes and improvements across SMU’s campus, impacting countless students through gifts to support Crum Basketball Center, Gerald J. Ford Stadium, the General Endowment Fund, the Mustang Athletic Fund, the Mustang Club, the Mustang Excellence Fund for Football/Basketball, the Moody Coliseum renovation and expansion, the SAE Fund and other vital areas.

Beyond the Hilltop, Donnally was a member of many clubs and organizations, including the Brook Hollow Golf Club, Crescent Club and Spa, the Tower Club, the Garden of the Gods Club and the Maroon Creek Club, among others.