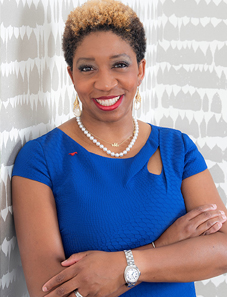 Since 2019, Brown has served as chief global litigation counsel for Kimberly-Clark Corp., advising the Fortune 500 company on matters of public policy. She is a guiding force in her profession, and her advocacy focuses on building inclusive communities and workplaces.

At SMU, the lifelong Dallasite was active in Alpha Kappa Alpha sorority, Student Foundation, Student Senate, Program Council, National Pan-Hellenic Council and Association of Black Students. She won the “M” Award as a senior, and one of her proudest achievements that year was being part of the effort that established the first minority affiliate of SMU Alumni.

After receiving her bachelor’s degree in sociology in 1995, Brown went on to earn a Juris Doctor from SMU in 1998.

Brown began her law practice at the global firm Locke Lord LLP. She was a partner in Lynn Pinker Hurst and Schwegmann LLP, a top-tier boutique trial law firm, before joining Kimberly-Clark.

She has extensive service on the Dallas Bar Association Board of Directors, and has been appreciated by her peers in Texas Lawyer as an Extraordinary Minority Lawyer and in Texas Monthly as a Super Lawyer and one of the Top 50 Women Lawyers in Texas.

In recognition of her accomplishments, Brown received a Dedman School of Law Distinguished Alumni Award in 2016.

She also has been named among the Top 500 Business Leaders in Dallas by D CEO magazine, and has won Top Women in Business and Top Minorities in Business awards from the Dallas Business Journal.

As a civic leader, she advances nonprofit impact with an emphasis on gender and racial equality. She has served on numerous boards and is immediate past board chair of the Texas Women’s Foundation and co-founder of its The Village Giving Circle. Her current roles include board chair-elect of The Hockaday School and a trustee of the Dallas Museum of Art.

Brown enjoys spending time with her children Evan, Ryan and Lily. A spinning and running enthusiast, she is a New York City Marathon veteran.