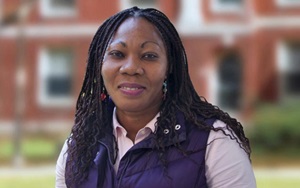 What country are you from and where did you get your law degree?

I am a citizen of the United States but my country of origin is Nigeria. I obtained my law degree from the University of East London, United Kingdom.

Tell me something about yourself and your country of origin?

Nigeria is the largest country in West Africa and also called the “Giant of Africa” due to the land mass, large population, economy and natural resources. Nigeria has approximately 184 million with over 500 ethnic groups and languages, of which the largest three are the Igbo, Yoruba and Hausa. Nigeria is divided between Christians, who live mostly in the south and Muslims, in the northern part of the country. Nigeria was a British colony and gained independence on October 1, 1960. Nigeria-Biafra civil war from 1967 – 1970 resulted in deaths of over one million Biafrans (Igbos tribe) and unimaginable economic hardships. I had an early exposure of human rights issues as a child, listening to my parents talk about the evils of the Nigeria-Biafra war. Since the 1970’s Nigeria altered between democratically elected governments and military dictatorships. In the meantime, I grew up fascinated by the rule of law and inspired by the hope for justice for all. Overtime, I began to entertain the thoughts that perhaps, I could devote my life promoting fairness among peoples, denouncing abuses to human rights and safeguarding people and properties.

When I moved to Germany as a teenager, our neighbors were refugees from Yugoslavia conflict. Subsequently, I spent lots of time listening to their heart wrenching stories from the civil war. Moved by my sense of duty to defend human rights, after I completed my education in Cologne, Germany, I proceeded to apply to the law school of the University of East London. That same year, I was accepted and later graduated with an LLB in Law (JD). Soon after, I proceeded to The College of Law, London, where I obtained a Post Graduate Diploma in legal practice.  I moved to Texas several years ago and have worked for the law firm of Friedman & Feiger, LLP in Dallas and subsequently, Federal Deposit insurance corporation in the legal support capacity.

With the recent change in law in the State of Texas, I strongly believe the LLM program in SMU will facilitate the attainment of a critical core of my career aspiration, namely- to promote basic human rights and, provide me a unique opportunity for a distinguished career in the practice of law.

Why did you decide to seek a graduate degree in the US and what attracted you to SMU?

I moved to Texas after completing my legal education in the United Kingdom. I felt that a graduate degree from an American university will enhance my educational aspirations and future career goals.

SMU is a reputable institution. In addition, doing the program at SMU will facilitate the attainment of a critical core of my career aspiration, namely-provide me with a unique opportunity for a distinguished career in the practice of law in a university with distinguished aluminis all over the world. Most importantly, SMU will equip me with unparalleled opportunity to learn from some of the finest legal luminaries and distinguished academicians in the State of Texas.

What has been your favorite class?

The top two classes for me are: International Franchising and Distribution Law

What is your favorite thing to do in Dallas?

I love visiting historical sites in the Downtown Dallas area such as, Dallas Art District and the Dallas Museum of Arts, all the remarkable historical sites (JFK tour), magnificent George W. Bush Library, State Fair of Texas and volunteering my time to serve my church community.

What are you planning to do after graduation?

I plan to sit for theTexas Bar in July of 2017 and hope to be licensed to practice law the state of Texas.

What tips or advise do you have for a new LL.M. student?

For a good number of foreign lawyers taking the LLM program like myself, who has probably been out of the school system for a while, it can be excessively challenging getting back to student life. A huge part of a successful completion of the LLM program lies with excellent time management skills, completion of all required reading assignments before class and ensuring you reach out to the professors for clarifications as needed. It is extremely useful to complete an outline after each class.

Keeping up with the school email and making attempts to attend very educative and interactive speeches by special guests and various organizations is also very important.