Applications completed by the regular decision deadline will automatically be considered for academic scholarships. Scholarships for full-time students are typically awarded on the basis of an outstanding undergraduate record and a strong performance on the LSAT.

In addition, there are several scholarships funded by private foundations.  Two of the private scholarships for entering law students– the Hatton W. Sumners Scholarship and the Sarah T. Hughes Scholarship - require a separate application.

Graduates are located in every state in the United States and in more than 80 countries around the world.

We would be happy to arrange for you to meet with an admissions counselor, tour the law quad, or observe one of our classes.  To schedule a campus visit or ask questions, please call the Admissions Office at (214) 768-2550 or e-mail us at lawadmit@smu.edu.

J.D. Application Deadlines
Applications are processed on a continuous basis beginning in early November.  It is in your best interest to submit your application as early as possible. 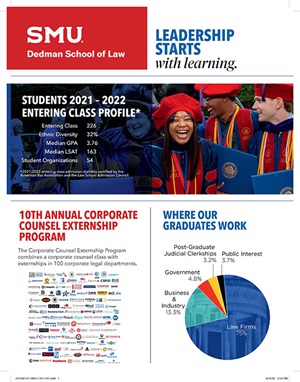