A world-changing academic partnership between SMU and the Bush Center was launched with a history-making gathering on April 25, 2013. George W. Bush, the 43rd President of the United States, and former First Lady Laura Bush, an SMU alumna, were joined by then-President Barack Obama and former presidents Jimmy Carter, George H.W. Bush and Bill Clinton, for the dedication of the first presidential center of the 21st century and the first presidential library of the social media age.

The event drew more than 10,000 invited guests, including former British Prime Minister Tony Blair and other former heads of state. More than 500 members of the SMU community watched the simulcast in McFarlin Auditorium or at an outdoor viewing screen.

In his remarks, Bush thanked SMU, noting that President R. Gerald Turner runs “a fantastic university.” He said SMU students are “awesome,” drawing cheers from students in the audience.

The opening of the Bush Presidential Library and Museum followed on May 1, 2013. The 13th presidential library administered by the National Archives and Records Administration, it serves as a resource for the study of Bush’s life and career while promoting a deeper understanding of the presidency, American history and public policy.

43,000 artifacts housed in the presidential archives

More than 100 SMU students have served as Bush Center interns

The Bush presidency (2001–2009) spans a period when emerging technology was changing the way members of the administration communicated as paper missives were being replaced by email. The Library houses almost 70 million pages of textual materials, approximately 80 terabytes of electronic records and about 200 million email messages. Other materials include more than 1,200 cubic feet of audiovisual materials, over 3.8 million photographs and 227 cubic feet of photo negatives.

Although located in the same structure as the Library and Museum, the Bush Institute faces west, toward the SMU campus, a symbolic gesture welcoming academic engagement. The Institute focuses on developing leaders and advancing policy on domestic and global initiatives inspired by the work of President and Mrs. Bush.

The Institute has sponsored more than a dozen symposia on campus, attracting over 2,500 participants from around the world and involving faculty and students across disciplines.

“I want people to be really impressed by what we do here: running an Institute that is results-oriented and focused on fundamental principles that will endure way beyond my time,” explained President Bush in a 2013 interview with SMU Magazine and The Daily Campus.

When asked about the impact of the Bush Center on SMU, he says, “Well, I can tell you what the impact of SMU is on the Institute and Library. It gives us great credibility to be associated with a fine university.” 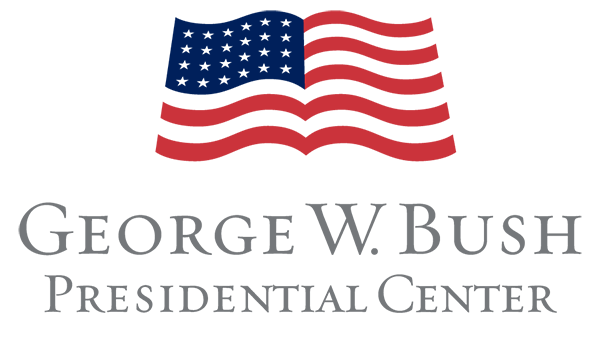