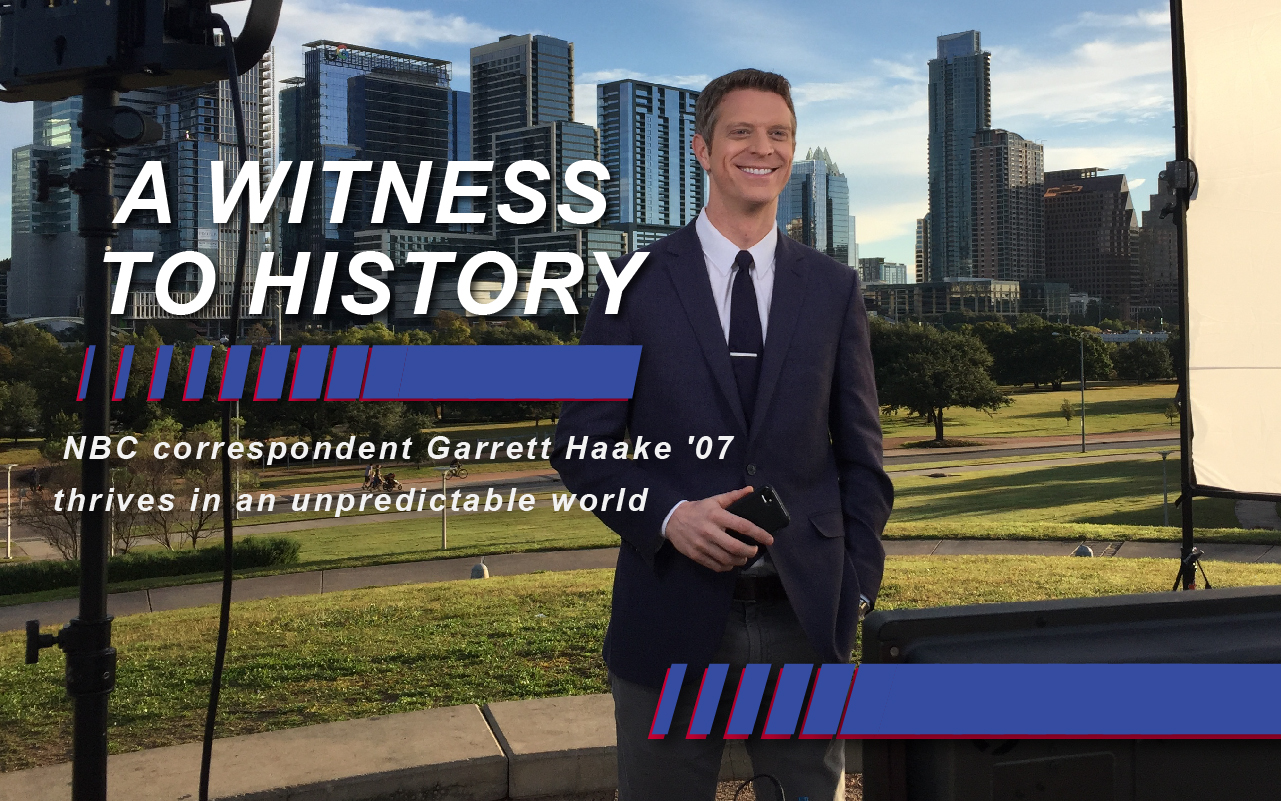 NBC News and MSNBC correspondent Garrett Haake ’07 lives by the advice he learned from an SMU faculty mentor – stay packed, and don’t make any dinner plans that can’t be canceled.

As a correspondent who has covered national stories since 2017, Garrett goes where the news takes him. In recent months, he has covered protests in Washington, D.C., the impact of the COVID-19 pandemic in states from Florida to California, and the role of Texas in the 2020 elections.

Garrett knew he wanted to major in journalism when he selected SMU. The opportunity to work in the professional-level Pederson Broadcast Studio and the offer of a President’s Scholarship, SMU’s most generous, brought him to the Hilltop.

His first taste of life at a national network came the summer after his junior year when he interned in New York with NBC Nightly News. SMU alumna Lucy Scott ’77, an Emmy Award-winning broadcaster who served as executive-in-residence in the journalism division of Meadows School of the Arts, helped him make the NBC connection.

The internship opened the door to Garrett’s first job after graduation, as a desk assistant for the news program. Garrett went on to become a researcher, then associate producer before successfully competing against hundreds of others for what he calls the best job in journalism – serving as an embedded reporter with a presidential candidate.

“I get paid to fly around the country and learn about things that interest me. I have a front-row seat to history.” 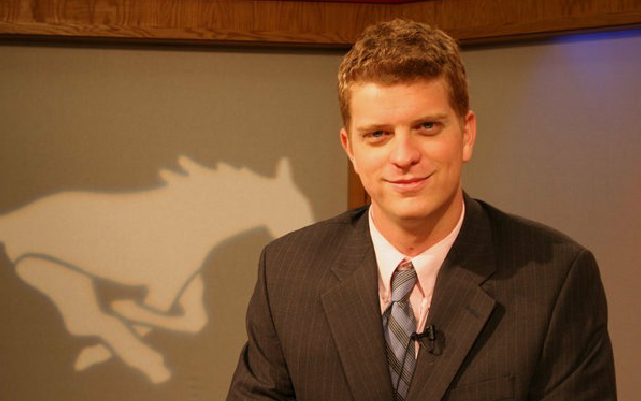 The best job in journalism

Beginning on July 27, 2011, at a political rally in a steamy warehouse in Pataskala, Ohio, Garrett spent 18 months traveling to 36 states covering Republican Mitt Romney’s presidential campaign. Often a one-man crew, he learned to think like a photographer and consider the visual components when covering a story. He shot video, produced interviews, filed blog posts and set up satellite signals to stream video back to NBC News.

(He’d already had the best training possible – anchors on SMU’s TV news program, The Daily Update, are required to be camera-ready at 6 a.m. for the 7 a.m. program that students call “boot camp.”)

“Covering the campaign was brutal, but I loved it,” Garrett says. “It was like a graduate degree in political science, history and journalism all at once.” And that SMU course he took on religion in the United States proved invaluable in covering the first member of The Church of Jesus Christ of Latter-day Saints to gain his party’s nomination for president.

He also added Twitter to his media toolkit. By the 2012 election, the social media platform became key to reaching younger audiences.

Now, reporting via Twitter is just as much a part of his job as camera stand-ups. It also means Garrett is on the clock 24/7.

“News consumers are conditioned not to have to wait for the very latest details, which means reporters don’t really face a single deadline anymore,” he says. “Our deadlines are every hour, or every time a reportable piece of news is ready for a tweet.”

“Get your hands dirty. If you want to be a reporter, report.” 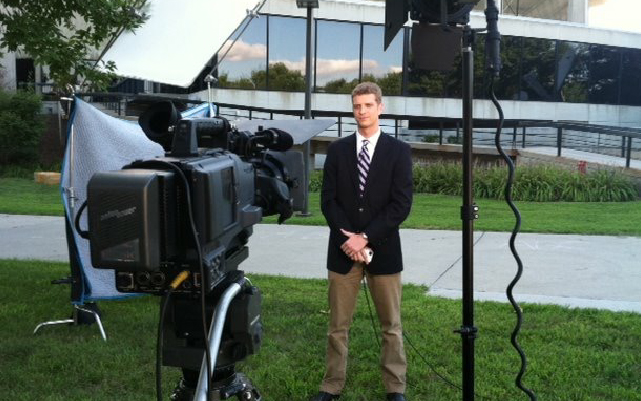 According to Garrett’s mom, Marylou Haake, the curiosity of a journalist drove Garrett even as a toddler. “When we read to him at night, we had to hide the books under the bed and tell him there were no more books, so he would go to sleep,” she says.

His family followed the news and discussed it at the dinner table, feeding his inquisitive nature. At an early age, he learned to be comfortable in new situations as his family moved from San Francisco, to Boston, to Germany to accommodate his father’s career in the energy industry. According to his mom, those moves also gave him “an appreciation for the way the rest of the world does things.”

SMU opened more doors for the future journalist. As a President’s Scholar, Garrett had access to honors classes, SMU Abroad in Italy and the opportunity to meet face to face with many journalists, politicians and leaders who lecture on campus. He met Anderson Cooper at an SMU Tate Lecture, and still keeps a personally signed copy of the CNN anchor’s memoir.

To this day, no matter where he is, a core group of SMU friends and fraternity brothers keeps him grounded with daily conversations. 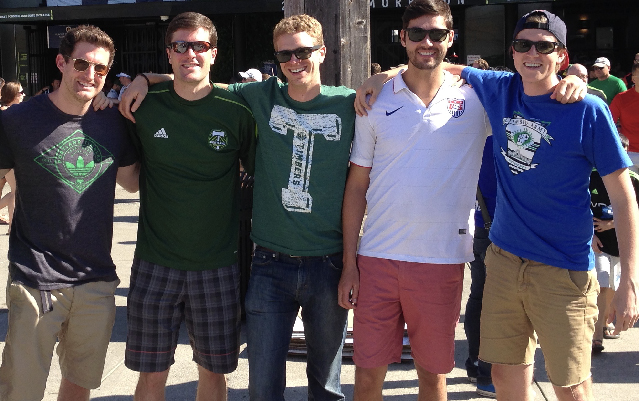 And staying grounded isn't easy, given the unpredictable nature of his work. Covering news in the middle of a pandemic and a volatile national election has kept him on the road, away from his home in the nation’s capital and his beloved rescue dog, Shiner, who is temporarily living with his parents. But Garrett wouldn’t change a thing.

“I tell people all the time, there are a thousand better ways to make money,” he says. “This job is too hard if you don’t love it.” 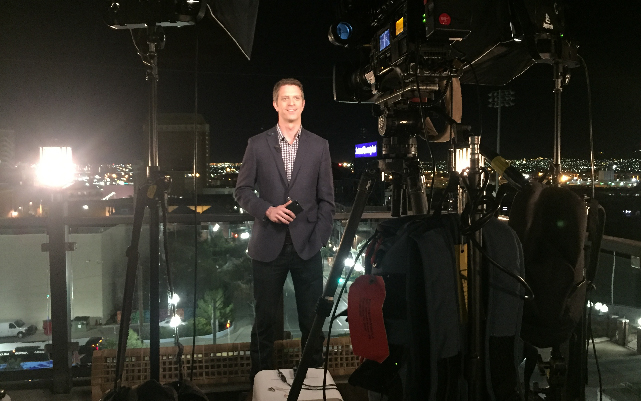 “The world is too interesting not to be curious. Journalism is not glamourous, but it’s a great way to scratch that itch.” 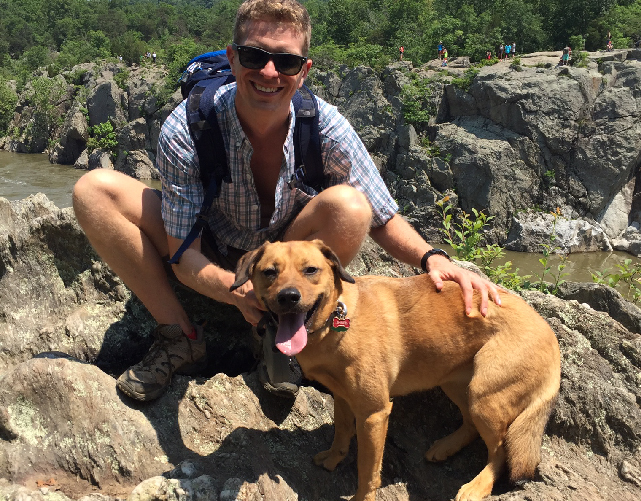