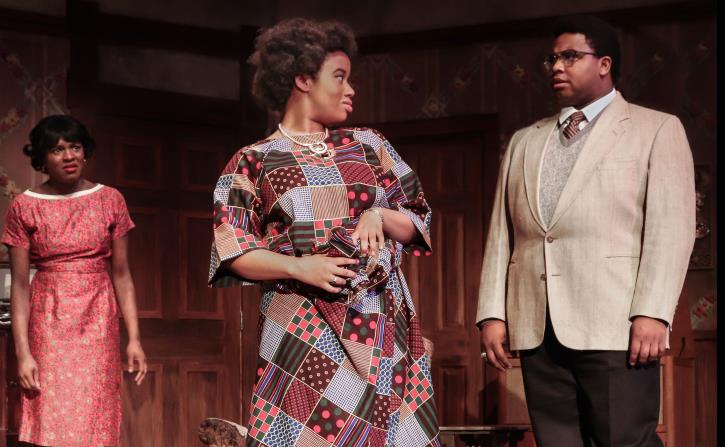 Yvonne Johnson, a costume design graduate student (M.F.A. ’20) at SMU Meadows School of the Arts, is one of three national winners of the Judy Dearing Student Design Competition sponsored by the Black Theatre Network (BTN). Johnson won first place in the Costume Design division. She will receive a $500 cash award and an exhibit of her work at the BTN conference in Winston-Salem, N.C., in late July. She will also receive a one-year BTN membership and mentoring by a professional.

Established in 1996 and held every other year, the competition covers theatrical scenic, lighting and costume design. It is presented in memory of distinguished African American costume designer Judy Dearing (1940-95), whose work covered a wide range of theatre and musical production, including the Pulitzer-winning drama A Soldier’s Play and Ntozake Shange’s for colored girls who have considered suicide/when the rainbow is enuf. The awards were created to encourage African American students in the design field and to offer them professional evaluation of their work as well as mentoring and networking opportunities.

Johnson won with her designs for the Meadows Opera Theatre production of Our Town at SMU and A Raisin in the Sun at Tarrant County College.

Johnson says she was thrilled to learn she’d won the Judy Dearing Award and is looking forward to presenting her work at the BTN conference. “It’s always inspiring to be recognized for the hard work and passion you put into a craft you love,” she says.

Johnson, a Marine veteran and mother of two, has been receiving recognition for her design work for several years. After earning a B.F.A. in fashion design at the University of North Texas in 2012, she worked at Williamson Dickies and designed the black shirt worn from 2016 to 2018 by “Big Tex” at the State Fair of Texas. Her work has been featured in The Real Housewives of Dallas and area fashion shows. She entered the SMU design program in fall 2017 and debuted her costume design work professionally with Day of Absence at Metamorphosis Theatre in Dallas the following March. In summer 2018, Johnson won a prestigious internship at the Television Academy in Los Angeles, where she had an opportunity to work with Bill Hargate Costumes, the facility that builds the costumes for Marvel, DC’s Superman, and many other film, theatre and television productions including ABC’s Black-ish, Netflix’s Santa Clarita Diet, Amazon Prime’s The Man in the High Castle and FX’s American Horror Story.

Since then she has worked as an assistant costume designer on Dallas Theater Center’s production of A Winter’s Tale and on multiple SMU opera and theatre productions. She is currently preparing costumes for Kitchen Dog Theater’s premiere of Reykjavik, directed by SMU professor Kara-Lynn Vaeni, which opens in Dallas June 6. This summer, she will serve as costume designer for two productions at Maples Repertory Theatre in Macon, Missouri: The Full Monty and The Savannah Sipping Society. She’ll also begin working on the first show of the Meadows fall 2019 theatre season, The Diary of Anne Frank.

Learn more about Yvonne Johnson and the SMU theatre design program. See another story about Yvonne.