When Yvonne Johnson was 17 years old, she wanted to join the Marines but was too young to enlist. Her mother was not enthusiastic, but the teenager eventually convinced her mom to sign her up. “Okay, fine,” said her mom. “At least there’s not a war.”

Then 9/11 happened when Johnson was in boot camp.

“I did a tour overseas,” said Johnson. “During Operation Iraqi Freedom, I was stationed in Kuwait. When war in Iraq was declared, we crossed over into Iraq for Operation Enduring Freedom. My Military Occupation Specialty (M.O.S.) was 2311, ammunition technician, so any time any of our Marines needed ammunition they had to come to us to get it.”

Toward the end of her almost five years of service and back in the U.S., she gave birth to her firstborn son. Taking stock of her future, she tapped into resources provided by the Veterans Administration Vocational Rehabilitation and Employmentprogram and enrolled in the University of North Texas (UNT). “I always wanted to create and design clothing,” she said. She enrolled in UNT’s competitive fashion design program in 2006, but had difficulties transitioning out of the military. She had to readjust not only to civilian life, but civilian life as a brand-new mother.It took her six years to finish her B.F.A. degree in fashion design. The discipline she gained in the Marines helped her persevere.

“During my last year at UNT, we discovered we were going to have another addition to the family, my second son,” she said, “so my senior year I walked the runway at the end of my fashion show nine months pregnant.” 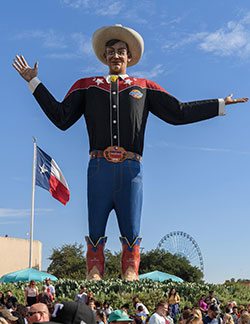 After graduating in 2012, she found work in apparel companies, first at Haggar in Dallas, then at Williamson-Dickies in Fort Worth, where she got to design the giant shirt worn by “Big Tex,” the 55-foot animatronic cowboy set at the entrance to the State Fair of Texas midway.

“I had to find a compromise between what the CEO wanted Big Tex to represent for the company, and the State Fair's theme of agriculture and livestock,” said Johnson. “So I researched the past shirts he’s worn and noticed that none had ever been black. I utilized that as a way to give him a more updated look. It makes me sad, though, as this was the last year he'll wear it since the shirt design changes every few years.”

Even though Johnson was grateful to work at Dickies, it wasn’t quite what she wanted. She began to search for a way to fulfill her true passion of costume designing. She applied and was accepted to the M.F.A. in Theatre Design program at SMU Meadows.

At the end of her first year in the M.F.A. program, she had the fortune of earning a career-influencing costume design internship with the Television Academy in Los Angeles.

“It was the most epic experience of my life!” said Johnson. “I was assigned to Bill Hargate Costumes, the facility that builds the costumes for Marvel and American Horror Story, DC’s Superman, the new Quentin Tarantino filmOnce Upon a Time in Hollywoodand a host of other film, television and theatre productions. I got to go on set and see them film the last episode of Strange Angel, a CBS streaming show. I attended Comic-Con in San Diego where I met Ruth Carter, the costume designer of Marvel’s Black Panther, and went costume shopping with Michelle Cole, Emmy-nominated costume designer for ABC’s Black-ish.”

Johnson is energized by the contacts she made while in Los Angeles, and now her cell phone is populated with the phone numbers of several professional costume designers.

“Because of my internship and by reaching out to the people I was meeting, I have all of these celebrities in my phone,” said Johnson. “They are costume designers, but to me they’re celebrities. They’re mycelebrities. I'm still in contact with them all and have already started making plans to connect with them again over spring break and the summer.”

Immediately after the internship, Johnson worked as an assistant costume designer on Dallas Theater Center’s production of A Winter’s Tale. Johnson’s most recent work was designing costumes for an SMU Meadows Division of Theatre production of A Lie of the Mind,a play by Sam Shepard set in the 1980s, performed at Meadows’ Margo Jones Theatre. The director and design team changed the decade to the 1970s and Johnson began sketching. In addition to costume designs, she shopped at various vintage clothing stores and pulled from the Theatre Division’s ample wardrobe stock, repurposing some articles of clothing into new creations stitched by the professional staff in the Meadows costume shop. She also helped with hair and makeup, and provided a color template for creating the look of bruising on one character’s face. 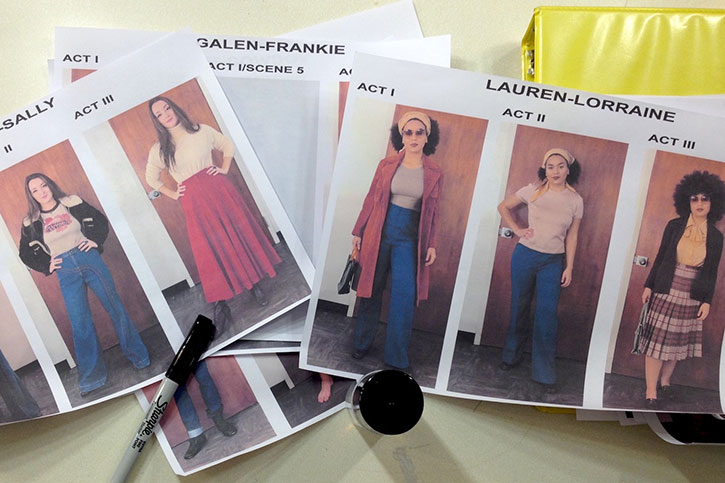 Design meetings can begin several months before the opening of a show, said Johnson, and costume designers need to be flexible. “As the play evolves over the rehearsals, you can change a little of the lighting. You can’t change the set, but you can change the costumes as you move closer to the director’s vision of the play. You have to be flexible and collaborative. You have to be a psychologist, stylist and tailor all at once.”

For people considering the M.F.A. in Theatre Design program at Meadows, Johnson lets people know it is a rigorous program, but reaps a lot of benefits and opportunities if you throw yourself into it.

“It’s a demanding program,” she said. “Me, I’m tired, I’m hungry, I’m worn down, but I love it. I’m getting to better myself, I’m getting to do something fun. I’ve been where I’m not doing anything fun – like getting shot at in the desert – so I’m like, this is nothing. I get to meet new people and interact with them, and have these ideas, and I get to be creative!”

“It’s also all about networking. No one is going to voluntarily come to you unless you’re already established. You need to speak up. The M.F.A. program can really propel you if you know how to maneuver yourself.” 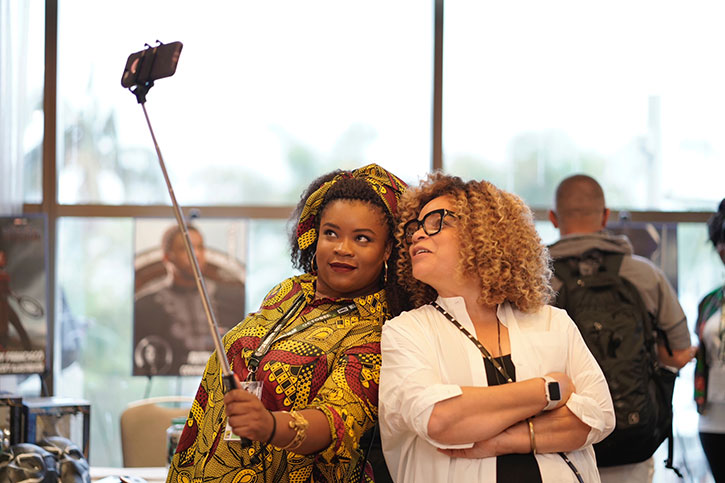 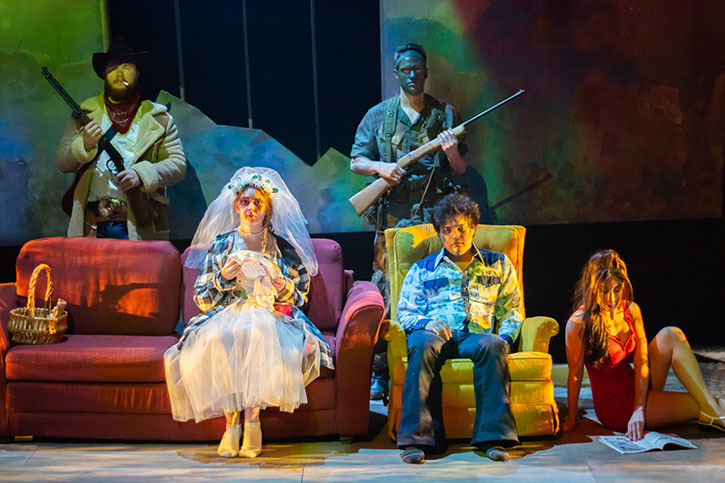 Costume designs for A Lie of the Mind began six months prior to the opening show. 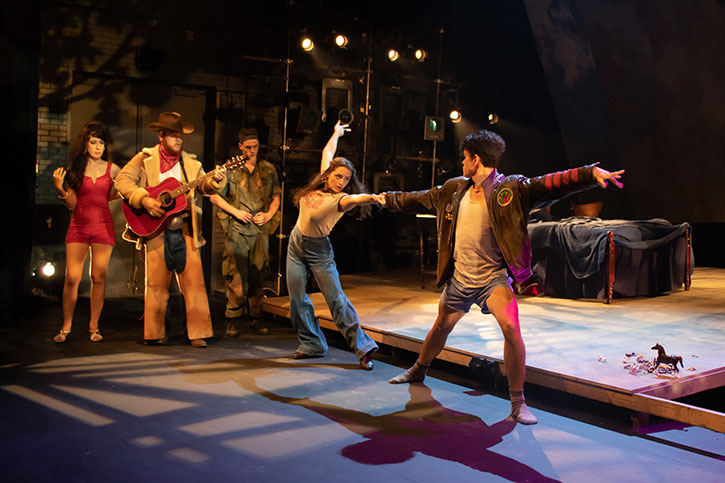 “You have to be a psychologist, stylist and tailor all at once,” says Johnson. 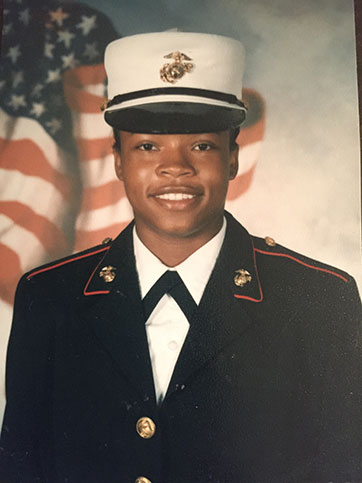 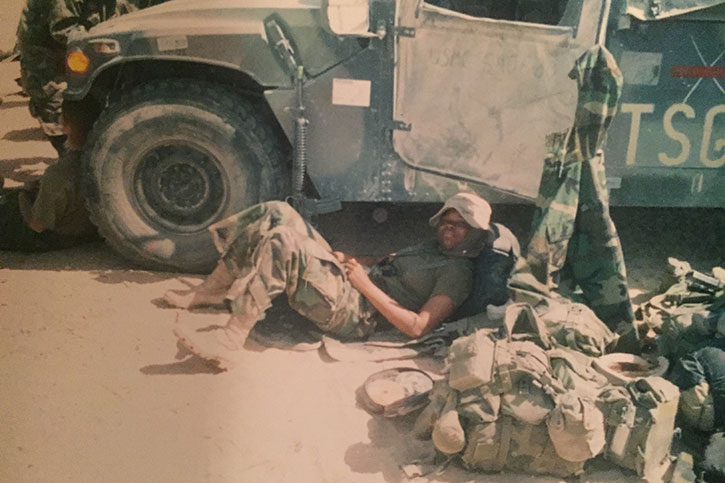 Johnson, age 19, was deployed to Kuwait after 9/11.
Previous Next
pause play hide show

Through SMU MilVets, veterans at SMU can enjoy the fellowship of other veterans, receive expert advice on transitioning from the military to academic and civilian life, get help with the G.I. Bill and have fun at special MilVets events. Veterans can also enjoy free coffee at the MilVets Lounge on the third floor of Hughes-Trigg.

Lunch is free, but please register!