Theatre’s new mainstage production, "The Sparrow," flies to the Garson next week

Just a few weeks ago, Molly Beach Murphy (B.F.A. Theatre ’09) flew from New York City back to her alma mater to begin rehearsals for her production of The Sparrow, an SMU Division of Theatre mainstage production that takes flight in the Greer Garson Theatre Feb. 25-March 1, 2015.

“In this production our hope is to take what is on the page, the intention of the story, and find our own way of bringing it to life on stage,” Murphy said. “It's a big story about community and belonging. It's got a huge heart, and is told with simple small theatrical conventions. I think that tells you something really beautiful about life. There’s big life in small places, tight communities and in small things.”

The Sparrow, written by SMU theatre alumni Nathan Allen, Chris Mathews and Jake Minton is a play first produced at the House Theatre of Chicago, a nonprofit ensemble theatre company with the mission of exploring the ideas of storytelling in order to create a unique and interactive theatrical experience.

Upon their graduation from SMU’s Division of Theatre, Allen, with help from Mathews, Minton and seven other SMU Theatre alums, started The House Theatre in Chicago. Eleven SMU graduates are in the company today.

“At SMU, the faculty gave me tools for my toolbox,” Mathews said. “They weren’t giving me the one way to do things. They allowed me to explore. The harmony was in the arguments.”

After having heard so much about the alums who had started The House Theatre, Murphy was able to meet with Nathan Allen (B.F.A. Theatre ’00) to chat about The House Theatre of Chicago and The Sparrow.

"The House Theatre has always been a great inspiration to me and many SMU students as examples of alums who started their own thing, made their own world and created their own pieces,” Murphy said. “What I love about what The House does is that they create whole worlds and involve the audience in it entirely”

“We are fully staffed,” Murphy said with a giggle. “It’s going to be a very physical show. On the page, they've written all kinds of 'impossible stage directions' (as The House calls them) and our job is to carve out what our conventions are. How we are going to make a whole town fly."

Chair of SMU’s Division of Theatre Stan Wojewodski Jr. looks forward to the production, on which so many current students and alumni have been collaborating over the past several months.

“It’s a marvelous and original script that looks at American life but most importantly it does it in very specific terms having to do with how a community understands itself and its individual members and how we either can look directly at things and heal or turn away from them and pretend that there’s nothing wrong,” Wojewodski said.

While at SMU, Murphy directed a lot of her own work and produced and directed several other projects and productions and was heavily involved in SMUST, SMU Student Theatre.

“I can’t say enough about SMUST,” Murphy said. “I think it’s really important for people to make their own work and to find out what your own work is especially when you have free space in the basement, because that costs in the real world!”

Murphy said that it is SMUST that made her realize that making her own work was something she wanted to do for the rest of her career.

“It’s that entrepreneurial spirit that SMUST cultivates,” Murphy said. “When you go out, you have to hang your own lights, find your own space and make your own schedule and find your own money and convince people to do it.”

Her most recent project was working with director Jo Bonney on the N.Y. Public Theater/American Repertory Theater production of Father Comes Home From The Wars, Pts. 1, 2 & 3 by Suzan-Lori Parks. Murphy is a recipient of SMU’s Garland Wright Award for Excellence in Directing.

“She’s a wonderful director,” Wojewodski said. “As she is working with some of the most interesting and exciting playwrights and directors right now, she is a wonderful resource and example for current students.”

How does she balance everything?

“A very intense Google calendar,” said Murphy with a giggle. 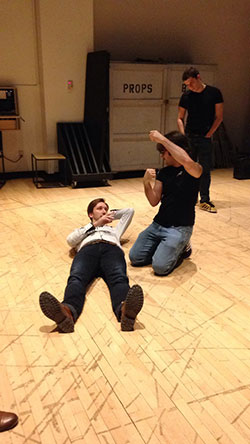 "In rehearsals for The Sparrow"

Wojewodski said he is often asked, “What sort of training are you training your students to do?” His reply: “We are training them to do the theatre they will make.”

Both Wojewodski and Murphy agree that the tools cultivated from a B.F.A. in theatre from SMU and from experience gained from SMUST can be applied to work in the real world.

“The most exciting thing about coming here is to work with the students,” Murphy said.“ SMU train's you in theatrical craft, but more importantly it cultivates individual artistry. Everyone here is their own artist.  To have the opportunity to work and collaborate in such a bursting exciting environment is a true thrill and honor.”