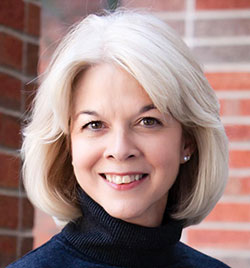 Dr. Pamela Elrod Huffman, associate professor of music and director of choral activities at Meadows, is part of the professional Austin-based choir Conspirare, which won its first Grammy yesterday for Best Choral Performance for the CD “The Sacred Spirit of Russia.” Dr. Huffman has been a member of Conspirare since January 2003 and has sung on all of the group’s recordings. She appears as a featured soloist on one of the tracks in the CD. Conspirare was the only American choir among this year’s nominees.

The full release is below:

Under Johnson’s direction, Conspirare also performed The Sacred Spirit of Russia in live concert in January of 2013, when the recording was made in Austin at St. Martin’s Lutheran Church, a space noted for its cathedral-like acoustics. Of that concert, Paul Robinson wrote for La Scena Musicale: “[Conspirare sings] with total command of both the language and the style of the music … a jaw-dropping introduction to a rich tradition of inspiring and uplifting music … unusual and deeply satisfying musical nourishment.”

Vladimir Morosan, a leading expert in Russian liturgical music and consultant to Conspirare for the performances and recording, wrote in Orthodox Arts Journal: “Although many Russian composers … wrote more or less complete settings of the Divine Liturgy, on a typical Sunday in parishes of the Russian tradition one is not likely to hear the works of just one composer. The practice, rather, is to sing an eclectic mix of settings by various composers. This was the approach used to build the program [recorded] by Conspirare … Several works on this program are North American (and perhaps world-wide) premieres, brought to life some hundred years after their composition … The result [is] a stellar lineup of extraordinarily rich and beautiful sacred choral music.”

For more information on Conspirare and upcoming shows visit www.conspirare.org.