A $50 million commitment from the Garry Weber Foundation, established by former Mustang football letterman Garry A. Weber ’58, is the largest gift in the history of SMU Athletics and supports a $100 million drive for a new 192,500-square-foot Garry Weber End Zone Complex at Gerald J. Ford Stadium. The Garry Weber Foundation’s gift continues an exciting new era for Mustang football and SMU as part of the University’s recently announced $1.5 billion campaign, SMU Ignited: Boldly Shaping Tomorrow. With the drive, SMU Athletics will reach a new milestone, having invested $250 million to develop and enhance championship-caliber athletic facilities across campus.

I hope that this gift will inspire SMU’s student-athletes and Mustang  fans to dream bigger than they thought possible and to strive for a new level of excellence.

“Garry Weber has been an integral part of SMU’s growth and success for many years,” said SMU President R. Gerald Turner. “From remarkable student-athlete to distinguished alumnus and donor, his dedication to SMU cannot be overstated. We are incredibly honored by the Garry Weber Foundation’s gift and excited about the impact this gift will have on all of SMU Athletics. From its founding, SMU has always been focused on excellence in everything we do. Having great athletics increases the visibility of the University.”

The new Garry Weber End Zone Complex will anchor Ford Stadium’s south bowl that will connect the stadium’s existing east and west gate entries. The three levels of the new complex will increase the functionality, efficiency and overall experience of Mustang football for student-athletes and fans, as well as inspire interest and investments in athletics across SMU’s campus. Team-focused spaces will include new locker rooms, a weight room, position-specific meeting rooms, a full-team auditorium and a kitchen and training table to support all of SMU’s 484 student-athletes. The new facility will also house football coaches, support staff and video and recruiting services.

“Both SMU and Dallas have played a substantial role in my life, and I feel honored to pay it forward to the next generation of Mustang student-athletes and fans,” said Weber. “Being a member of a team means striving for success for yourself and those around you, and I’m proud to continue to be a part of Mustang football and its future success and growth. I hope that this gift will inspire SMU’s student-athletes and Mustang fans to dream bigger than they thought possible and to strive for a new level of excellence.”

The newly constructed concourse will offer premium experiences for fans, expand guest facilities, improve pedestrian accessibility and add an inviting breezeway that joins the stadium’s entryways to the internal field. The facility will reflect the University’s Collegiate Georgian architectural style, for which it is known.

“Garry Weber Foundation’s gift exemplifies the kind of spirit that we hope to instill in our student-athletes,” said Rick Hart, SMU director of Athletics. “As a former Mustang football player and a community leader, it is fitting that his name will adorn the new End Zone Complex. This gift will continue our momentum toward a bright future that would not be possible without Garry’s generosity. His belief in the SMU student-athlete experience – in shaping champions – will serve as an inspiration to the entire SMU community.”

“With this gift, we are capitalizing on the incredible momentum that our football program is currently experiencing and ushering in an exciting new era of Mustang football,” said Rhett Lashlee, SMU head football coach. “The Garry Weber End Zone Complex will leave a legacy that creates a lasting impact on our student-athletes for generations. It will also allow us to attract the very best future recruits to join the Mustang family.” 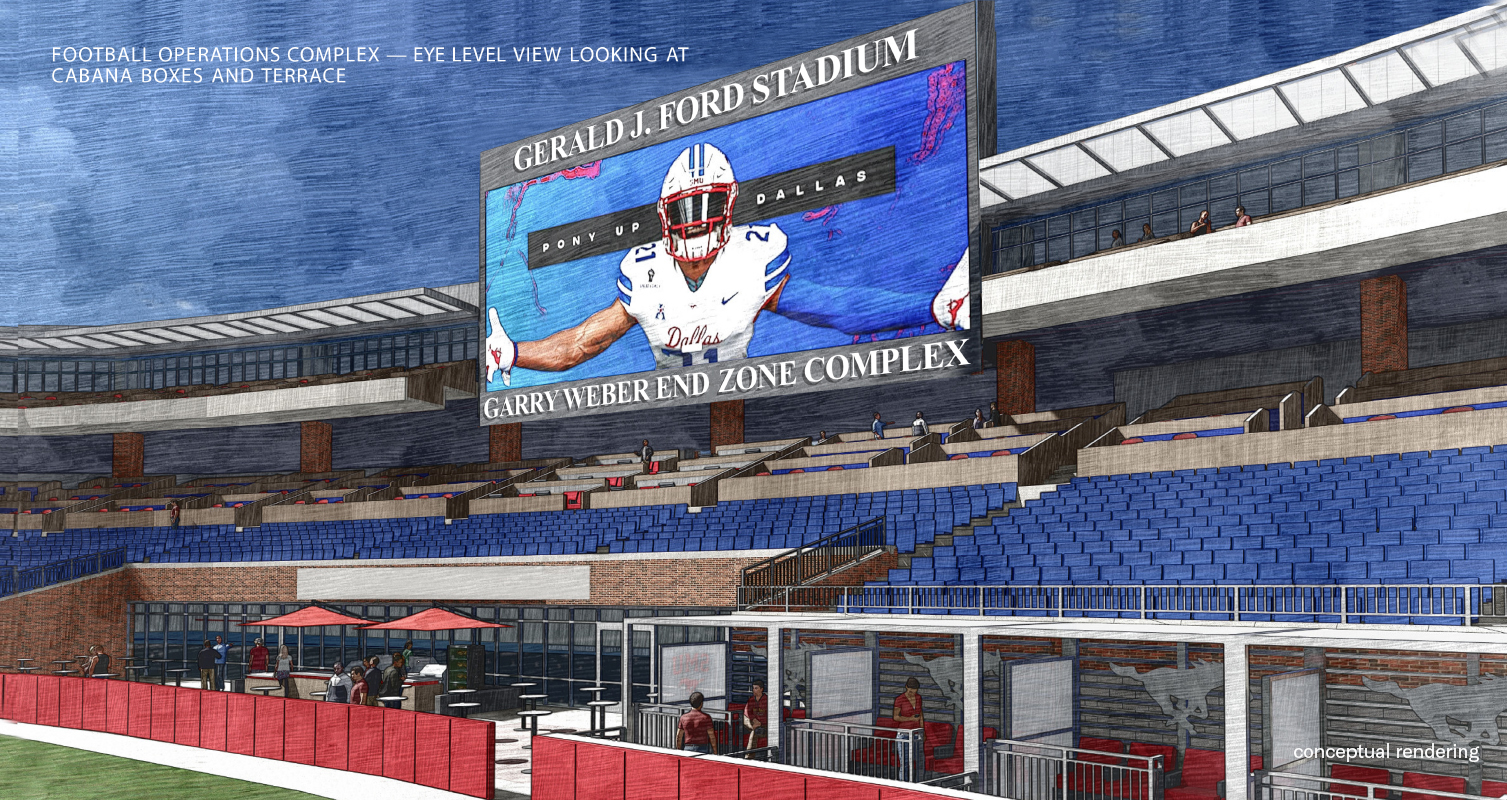 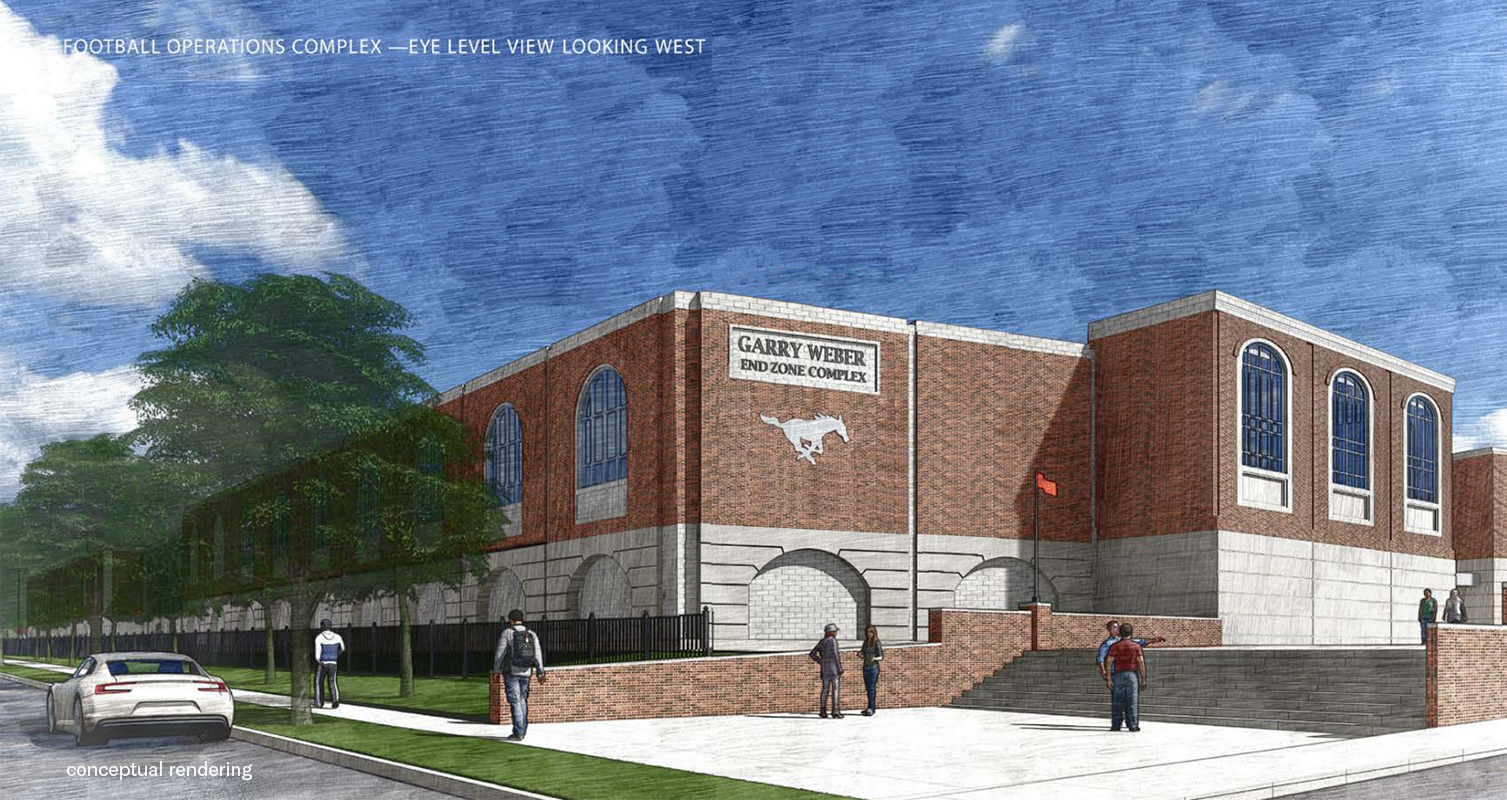 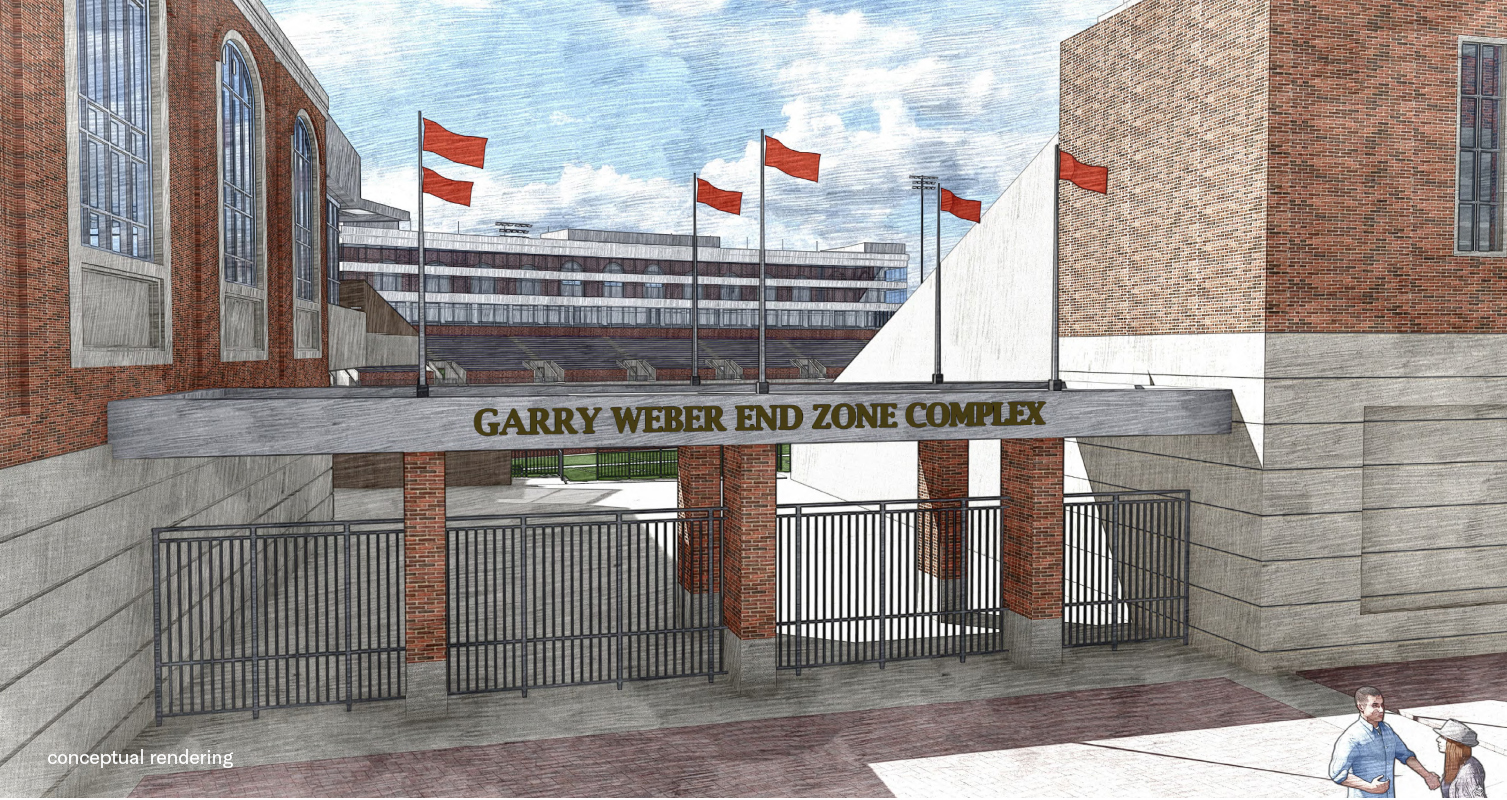 This gift will continue our momentum toward a bright future that would not be possible without Garry Weber’s generosity.

The Garry Weber Foundation’s gift builds on a longtime legacy of excellence in SMU Athletics. Celebrating its 20th anniversary in 2020, Ford Stadium has come to represent athletic distinction and Mustang pride at SMU, creating a new tradition of tailgating dubbed “the Boulevard.” The stadium was made possible by and named for SMU Trustee Gerald J. Ford ’66, ’69, who was joined by dedicated Mustang alumni, donors and community members.

“I’ve been honored to have Ford Stadium bear my name, and I’m pleased by the plans for this expansion,” said Ford. “Garry’s gift is a generous investment in SMU and Mustang Athletics and continues our high expectations for University excellence.”

“We are incredibly grateful for Garry Weber’s generosity and continued enthusiasm for Mustang football, SMU Athletics and our great University,” said Brad E. Cheves, SMU vice president for Development and External Affairs. “His historic commitment kicks off a challenge to all of Mustang Nation to reach the $100 million goal as quickly as possible.” 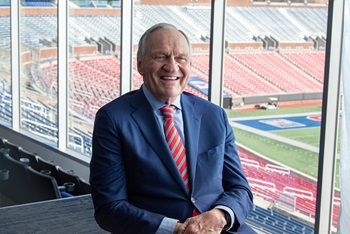 Garry Weber ’58 is a proud graduate of the Edwin L. Cox School of Business at SMU. A former member of the Mustang football team, Weber served on the SMU Board of Trustees from 1984 to 1996 and has been a member of the Edwin L. Cox School of Business Executive Board for over 30 years. In 1998, Weber received the University’s highest honor, the Distinguished Alumni Award. In 2016, he was honored with the Silver Anniversary Mustang Award, the most prestigious award granted by the SMU Lettermen’s Association. An active presence at SMU and throughout Dallas, Weber has contributed generously to SMU and various educational and philanthropic causes including Scottish Rite for Children, UT Southwestern, United Way and the Boy Scouts of America, among others.

Having served Dallas as both a Dallas County judge and City Council member, Weber is the founder of Weber Financial Inc., as well as an active individual investor in venture capital and late-stage hedge funds.

The newly funded complex will support the SMU Ignited campaign’s goal of enhancing campus infrastructure and strengthening the North Texas community through competitive athletics and diverse programming and encouraging civic pride. To learn more about the drive for the Garry Weber End Zone Complex, visit smu.edu/endzone.

A vital part of the SMU Ignited campaign, the Garry Weber Foundation’s gift is the most recent in a series of significant commitments to SMU’s future, including $50 million from Carolyn L. and David B. Miller ’72, ’73 for endowed scholarships and the expansion and renovation of the Cox School of Business facilities and $100 million from the Moody Foundation to establish the Moody School of Graduate and Advanced Studies. To learn how to get involved in SMU’s exciting new campus developments, visit smu.edu/ignited/goals/enhance .