A $15 million commitment from entrepreneurs Bill Armstrong ’82 and Liz Martin Armstrong ’82 will enable SMU to break ground in early December for the Garry Weber End Zone Complex, the expansion and improvement project at SMU’s Gerald J. Ford Stadium, home to Mustang football. The $100 million drive for the complex was launched in January 2022 with a $50 million gift from the Garry Weber Foundation, established by former Mustang football letterman Garry A. Weber ’58. The groundbreaking of the new complex is currently scheduled for December 2, 2022.

“Bill and Liz Armstrong’s continuing dedication to initiatives across campus is an inspiration to our faculty, staff and students,” said SMU President R. Gerald Turner. “Their contributions to SMU Athletics, academics and our students’ campus experiences are bolstering the future of SMU and will leave a lasting impact in North Texas and beyond.”

The Armstrongs’ gift to the Garry Weber End Zone Complex supports one of the major goals of SMU Ignited: Boldly Shaping Tomorrow, the University’s multiyear $1.5 billion campaign for impact, by enhancing the campus and community through competitive athletics and diverse programming that build civic pride.

“SMU Athletics plays a vital role in the North Texas community, in the experiences of SMU students and in our lives,” said Bill Armstrong. “We’re proud to invest in the bright future of SMU Athletics, which brings the highest level of collegiate competition to Dallas and prepares student-athletes to be champions in their pursuits on the field and throughout their lives.”

The gift by the Armstrongs supports SMU Athletics efforts to provide ever-growing opportunities to student-athletes and the wider community through facilities and programmatic offerings. Since 2013, SMU Athletics has invested over $250 million in championship-caliber facilities across campus.

The new Garry Weber End Zone Complex will anchor Ford Stadium’s south bowl that will connect the stadium’s existing east and west gate entries. The three levels of the new complex will increase the functionality, efficiency and overall experience of Mustang football for student-athletes and fans. Team-focused spaces will include new locker rooms, a weight room, position-specific meeting rooms, a full-team auditorium and a kitchen and training table to support all 484 SMU student-athletes. The new facility will also house football coaches, support staff, and video and recruiting services.

“Bill and Liz Armstrong have been active participants in shaping our vision for the SMU Football program and, in particular, the football operations center,” said Rick Hart, SMU director of Athletics. “This gift to the Garry Weber End Zone Complex punctuates their commitment to our program and to all of the student-athletes, coaches and staff who are dedicated to bringing championships to the Hilltop.”

In the years since they graduated, the Armstrongs have continued to play active roles at SMU, contributing generously to both academic and athletic initiatives across campus and becoming recognizable faces at the University’s “Boulevarding” tradition prior to football games. This gift to the Garry Weber End Zone Complex represents their largest single commitment to SMU.

In 2011, the couple helped create a new home for SMU student residents by committing the leading gift to a new Residential Commons complex. A 2018 gift from the Armstrongs established the Armstrong Fieldhouse within the SMU Indoor Performance Center, providing the University’s student-athletes with state-of-the-art training and practice facilities. Continuing their support of SMU Athletics, the couple recently helped launch the Vision 2025 Football Support Fund, an ongoing fundraising drive to continue growing the impact of Mustang football through 2025 by addressing critical program needs.

“Our family was founded in a Geology 101 classroom at SMU, where Bill and I met, and our children, two of which are also proud SMU alumni, extended that legacy with their own experiences on the Hilltop,” said Liz Martin Armstrong. “We are excited about the future of Mustang football and look forward to seeing how what happens on the field inspires great things in the lives of student-athletes and others in the years to come.”

This gift to the Garry Weber End Zone Complex punctuates the Armstrongs’ commitment to bringing championships to the Hilltop.

One of SMU’s most cherished and recognizable structures, Gerald J. Ford Stadium has come to represent athletic distinction and Mustang pride at SMU alongside the University’s long-held tradition of tailgating dubbed “boulevarding” along Bishop Boulevard before football games. Celebrating its 20th anniversary in 2020, the stadium was made possible by and named for SMU Trustee Gerald J. Ford ’66, ’69, who was joined by dedicated Mustang alumni, donors and community members.

“Gerald J. Ford Stadium has greatly enriched the history of SMU, and the Garry Weber End Zone Complex will extend and expand that impact well into future,” said Brad E. Cheves, SMU vice president for Development and External Affairs. “We are forever grateful to donors like the Armstrongs who pave the way to a better future for our students, our University and our world.” 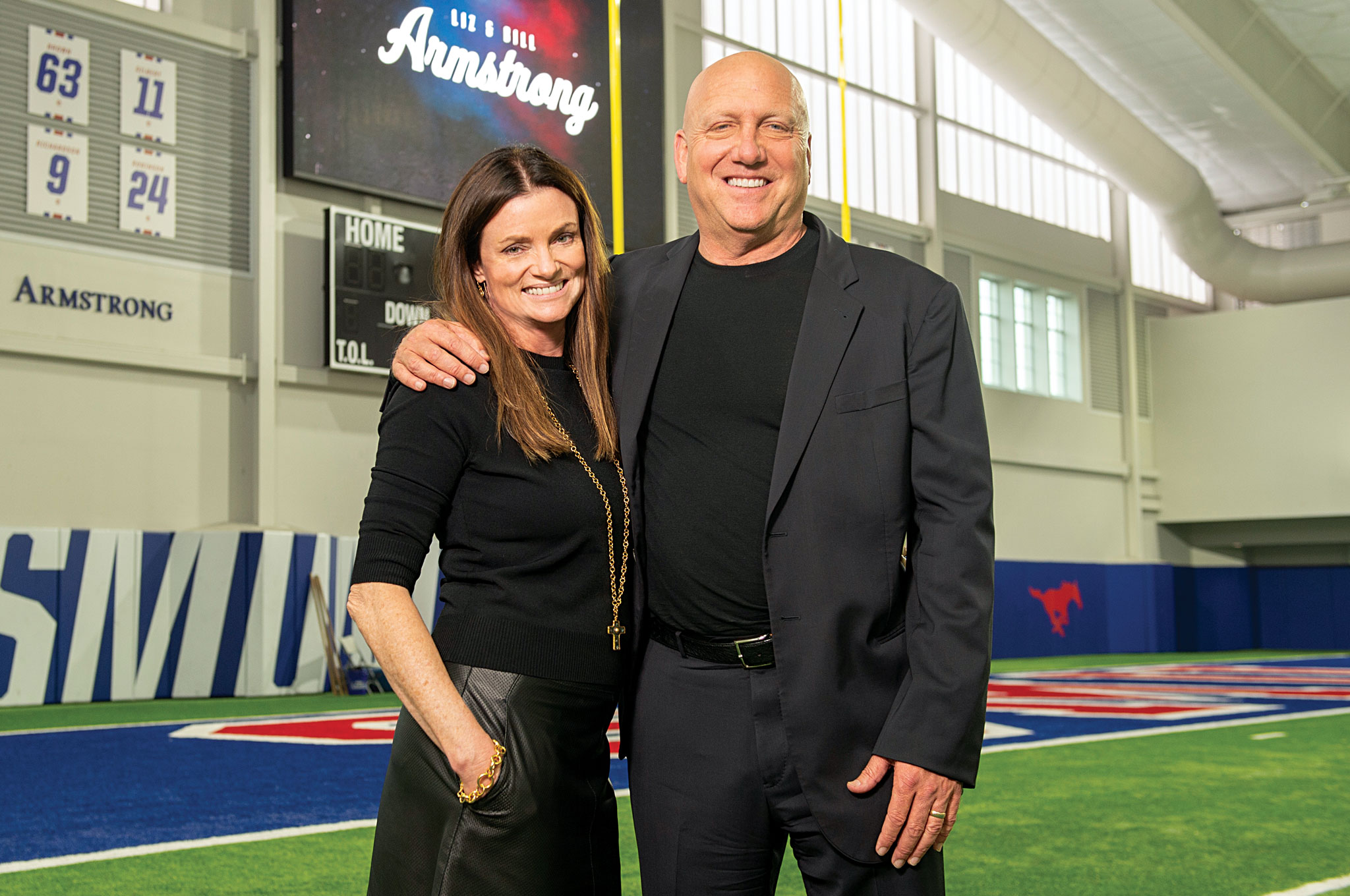 Liz Martin Armstrong ’82 and Bill Armstrong ’82 met as geology majors at SMU and married in 1984. While at SMU, Bill was a member of Phi Gamma Delta fraternity, the Honor Council and the Phi Beta Kappa Society. Liz served as treasurer of Pi Beta Phi and performed in Pigskin Revue and Parents’ Weekend with its song group. She also served as an AARO, or orientation, leader. Both attended geology field camp at SMU-in-Taos, where they fell in love and later provided the funding for Casita Armstrong. Together, they propelled a startup into Armstrong Oil and Gas, an energy exploration juggernaut; founded the award-winning Epoch Estate Wines; and established The Armstrong Foundation, which focuses on arts and education philanthropy. Over the years, their farsighted generosity has enriched countless lives at SMU and across the nation.

Recipients of the 2021 Distinguished Alumni Award, the Armstrongs are among three generations of family to attend the University – including their daughters, Lindsey Strawn ’10 and Leigh Young ’11 – and their investments across the campus reflect their commitment to enhancing the student experience. In 2011, they were the first to commit toward the construction of Armstrong Commons, a cornerstone of SMU’s living-learning community. More recently, they made possible Armstrong Fieldhouse, the primary component of the Indoor Performance Center. A passion for ballet led them to fund the Armstrong Visiting Artist-in-Residence in Ballet at Meadows School of the Arts during the 2020–21 academic year, and they also endowed a Dedman College Scholarship.

SMU is the nationally ranked global research university in the dynamic city of Dallas. SMU’s alumni, faculty and more than 12,000 students in eight degree-granting schools demonstrate an entrepreneurial spirit as they direct change in their professions, communities and the world. Building on its history of excellence, the University has launched SMU Ignited: Boldly Shaping Tomorrow – a multiyear $1.5 billion campaign to empower outstanding students, to enrich teaching and research, and to enhance our campus and community.