After teaching organ improvisation in the Division of Music off and on since 1996, Dr. George Baker has been named an adjunct associate professor of organ. Baker is an internationally award-winning organist, recording artist, composer and teacher who studied under some of the finest organ teachers of the 20th century, including Pierre Cochereau, Jean Langlais and Marie-Claire Alain in Paris. Along with his compositions, Baker is best known for his improvisation, a unique skill for organ players.

“I need to have an artistic outlet,” Baker said. “I need to hear music and play music and teach music. It’s a need like breathing.”

In addition to his extensive music career, Baker worked as a dermatologist from 1991 to 2020. He retired to focus on his music career and teach organ improvisation at SMU.

“My greatest joys when working with students come when they have those ‘Aha, now I get it’ moments,” Baker said. “I like to try to inspire them to want to work harder, dig deeper, and find the hidden treasures available to them to unlock their fullest potentials. Improvisation is a scary thing, and instilling confidence is a big part of my teaching.”

Stefan Engels, the Leah Young Fullinwider Centennial Chair in Music Performance and professor of organ, says Baker’s experience as an organist, improviser and composer is “unmatched.”

“Dr. Baker is a superb asset to our organ department,” Engels said. “As someone who is deeply immersed in the French organ tradition, he greatly adds to the already rich and varied offerings in our program.”

Baker’s father was a chaplain at the university, so he grew up visiting Perkins Chapel. His parents, who were “very musical,” encouraged Baker to start playing piano at age 4. Then, after discovering the pipe organ at Highland Park United Methodist Church, Baker started taking lessons at age 11.

“I fell in love with the organ,” Baker said. “It was genetic. My brain was programmed to love it.”

Baker won the American Guild of Organists National Competition in Organ Playing in 1970. He earned his Bachelor of Music in organ at SMU under Robert Anderson, a legend in the Division of Music. 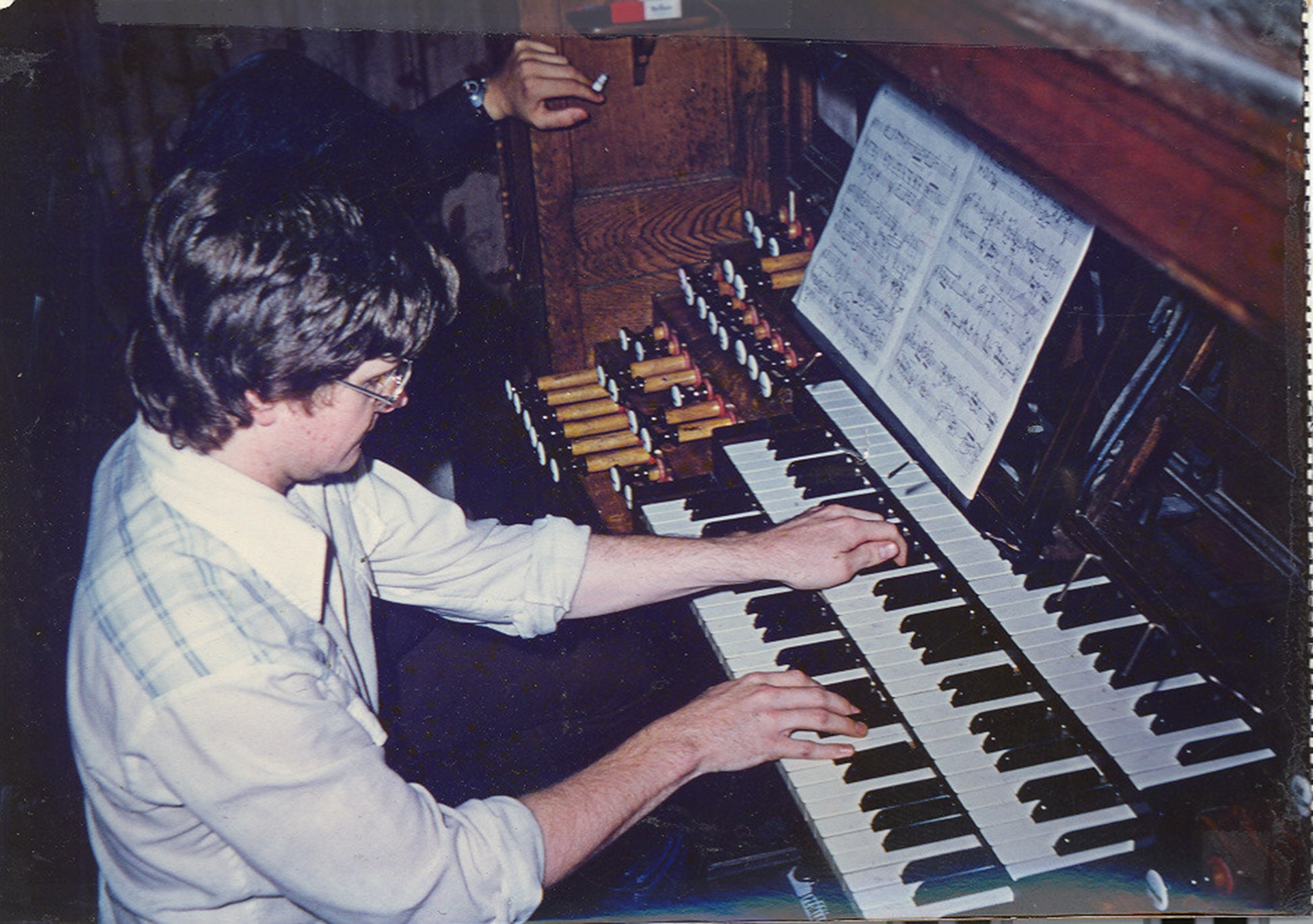 In July 1975, George Baker (foreground) and producer Jean-Marc Cochereau, the son of famed organist Pierre Cochereau, recorded an album of American music on the 1888 Cavaillé-Coll organ at the Basilica of Saint-Sernin in Toulouse, France.

“It was fortuitous that I attended SMU because the organ professor, Robert Anderson, was brilliant,” Baker said. “Thanks to him, I had my career.”

Anderson encouraged Baker to travel to Europe to study the organ. After he graduated from SMU, Baker lived in Paris from 1973 to 1975. There, he studied organ improvisation with Pierre Cochereau and Jean Langlais.

“I moved from living at home for 22 years to a tiny 100-square-foot apartment in Paris,” Baker said. “It was very romantic. From the window, I could see the top of the Eiffel Tower peeking out from above the rooftops. I often got to go up to the Notre Dame organ loft and watch the great Pierre Cochereau improvise. That was a wonderful education.”

While in Paris, Baker was the first native-born American to record the complete works of Bach, a 19-LP set (1979). When he returned to America, Baker earned his Master of Music in theory and composition from the University of Miami. Then he pursued a career as a music professor, but, to his dismay, couldn’t find a position.

“Even though I had all these prizes and studied with the great organ players, no one wanted to give me a job,” Baker said. “I felt so duped and naïve.”

Baker was offered a doctoral teaching fellowship at the University of Michigan, where he earned his Doctor of Musical Arts in 1979. Then, after teaching at Catholic University for two years, he decided to chase another dream: medical school.

“I thought, ‘You’ve climbed Mount Everest of the organ. What are you going to do now?’” Baker said.

He attended the University of Texas Southwestern Medical School and, after finishing his residency and practicing dermatology for a few years in Austin, returned to Dallas to earn his M.B.A. at SMU Cox.

While earning his M.B.A., Baker started teaching organ in the Division of Music. He balanced his music career and dermatology practice by waking up early to compose.

During the early days of the pandemic, Baker wrote a book titled Workbook for Organ Improvisation, which will be available in January 2022. Baker and Stephen Tharp, an internationally respected organist, improviser and recording artist, will discuss the book at “Conversation and Premieres with Stephen Tharp and George Baker” at Caruth Auditorium on January 25 at 7:30 p.m. The event is free and open to the public.

“Stephen and I will first have a candid dialogue about the current state of organ improvisation, organ composition, organ performance and other topics related to the organ,” Baker said. “Following the dialogue, Stephen will play two of my new organ works. I can’t wait for this special evening.”

Learn more about Dr. George Baker and about the SMU Meadows organ department.