Victory Garden in a Box

Restorative Farms, the Dallas nonprofit co-founded by Associate Professor Owen Hanley Lynch, had to retool quickly when the county shut down non-essential businesses to thwart the spread of COVID-19.

The organization was at risk of losing thousands of seedlings that had been grown to sell at farmers’ markets in April — its most profitable month — and for the new, about-to-open Hatcher Station Training Farm and Community Garden, where residents of underserved neighborhoods could learn how to grow their own fruits and vegetables.

Now Hatcher had to delay its opening due to shelter-in-place mandates, and prospects were dimming for outdoor markets. Restorative Farms had to retool, and fast.

The organization pivoted to selling box gardens (dubbed GroBoxes) online, thanks to the help of 14 communications students.

“We are delivering a garden farm in a box,” Lynch says. “We bring everything to you that you need to grow.”

Lynch, who teaches in the Meadows Division of Corporate Communication and Public Affairs (CCPA), is on sabbatical while he shepherds the nonprofit, but two of his colleague Doric Earle’s classes — Topics in Organization Communication (CCPA 5304 - Social Enterprise) and Group and Team Communication and Leadership (CCPA 3368) — were already working with Restorative Farms before the shutdown took effect on March 23.

“The students went home but have been able to study how a community-based organization becomes e-commerce-based to stay open,” Lynch explains. “They have been part of this in real time to see us scramble and reinvent ourselves to adapt to new market conditions.”

The classes are small — five students in social enterprise and nine in communication and leadership. They collaborate to promote the $110 GroBoxes (approximately half the cost of similar items sold at big-box retail stores), each of which features a wooden box, six cubic feet of organic potting soil, and a variety of seedlings that the buyer selects, such as cucumbers, squash, tomatoes and more.

Residents in the impoverished area served by Restorative Farms may purchase the kit at a discount, and some will be provided free of charge. The garden boxes are available to the general public, and earnings from sales help the local community.  “For every 10 boxes sold, we donate a box in the neighborhood and support local growers,” says Lynch.

The students have handled critical tasks, such as creating content for and reviewing the RestorativeFarms.com website; crafting social media strategy and presence; writing health and nutrition curricula for pre-K through eighth grades; producing a biweekly newsletter; launching a KickStarter campaign; and more.

“The students have the rare opportunity to be part of a social business that is focused on positive impact in underserved communities in Dallas,” Earle notes. “Their ideas, critiques, newsletter and other content are being applied in real time by a real organization. They get to see their ideas and efforts making a real impact, a real difference, in something that matters.”

Before Dallas County’s shelter-in-place order took effect, the students visited the nonprofit’s Seedling Farm at the Martin Luther King, Jr. Community Center, which is half a mile from Fair Park in South Dallas, and the new Hatcher training farm a couple of miles away.

They met farm director and master gardener Tyrone Day, who is from the neighborhood and became an experienced horticulturalist during 26 years of false imprisonment.

The predominantly African American neighborhood surrounding Restorative Farms suffers from a dearth of grocers. In fact, South Dallas is one of the largest food deserts in the nation, Lynch says.

It’s been a rewarding experience for student Parma Beldy.

“To see how such a simple business model can impact a whole community so close to SMU is empowering and humbling,” Beldy reflects. “Through working with Restorative Farms, I have learned more about the intersection of giving back to a community and capitalism, and how business and service do not have to be mutually exclusive.”

“Because it is a nonprofit, I get to learn about marketing through a story, making sales, and coming up with creative solutions to get the word out without breaking the bank,” she explains. “Right now, I am working on developing a relationship with schools around Dallas to ‘sponsor’ schools in South Dallas, meaning they will donate GroBoxes, have planting days with their brother/sister school, and maintain the garden.”

The students have participated in Zoom meetings with Restorative Farm board members to discuss suggestions and chart next steps.

“Dr. Earle has given us each the opportunity to voice our own opinions throughout every decision-making process, while encouraging us to brainstorm our own unique ideas,” notes student Olivia Shawkey. “It’s been so cool to see our own ideas come to life and actually make a direct impact. I feel very empowered to explore what else I can do to further engage in the community through this project and perhaps projects of my own in the future.”

At some point, Hatcher Station Training Farm and Community Garden will open, and Restorative Farms will continue with its primary mission: to empower residents by teaching them how to farm for their own food supply and for profit.

“I’m trying to develop a system that will sustain itself to grow vegetables for the local community and for the Dallas market,” Lynch explains. “If it can work it can be a real engine for economic development and well-being, but it’s not easy because the margins are so tight.

“Our goal is to build a network of growers that we can support to be successful. We will continue to get people engaged with food and production in their backyards, so they constantly come back to us and we supply them with seasonal seedlings. Once a week we’ll have stream sessions where people can call in and ask questions. How do you do this and support it? We’re letting the students figure this out.”

When Lynch was growing up in central London, there were still Victory Gardens on vacant lots where buildings had been obliterated during World War II.

Over the years, he says, people have lost that connection to the farm.

“Ninety percent of community gardens fail because they don’t know what to grow and it takes a lot of work,” he says.

When people do the three-week training at Hatcher, they’ll be not only educated but also invested in it, he figures.

Says Lynch, “If you go through all that, then we know you’ll be successful.”

The same can be said for the students. 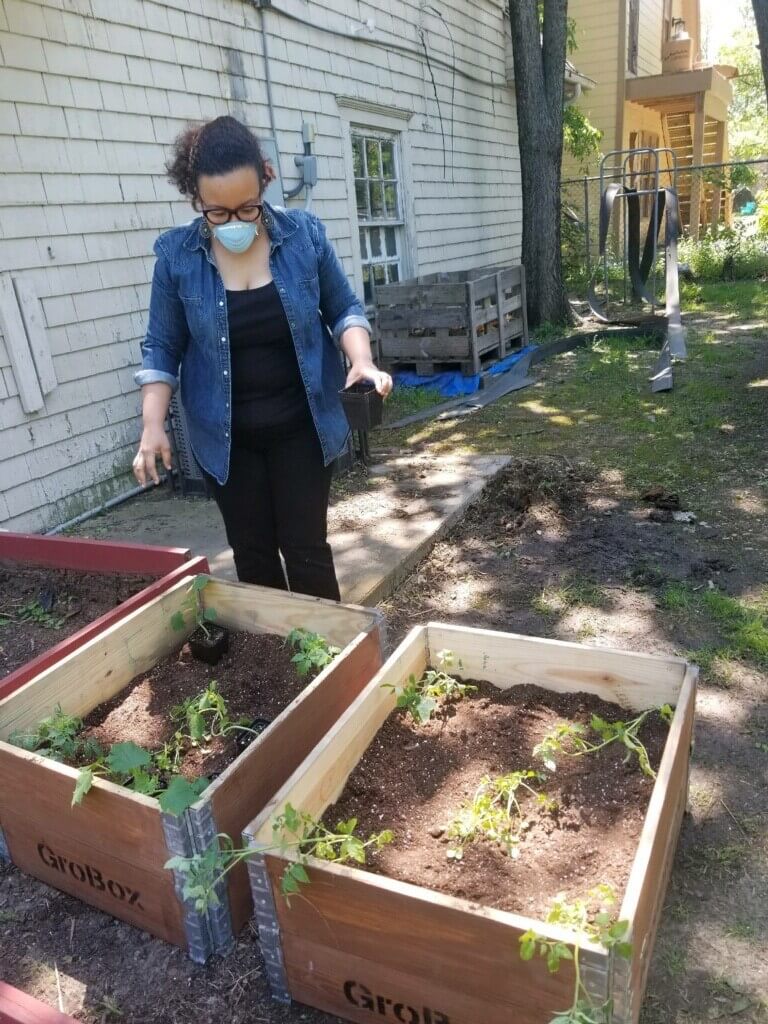 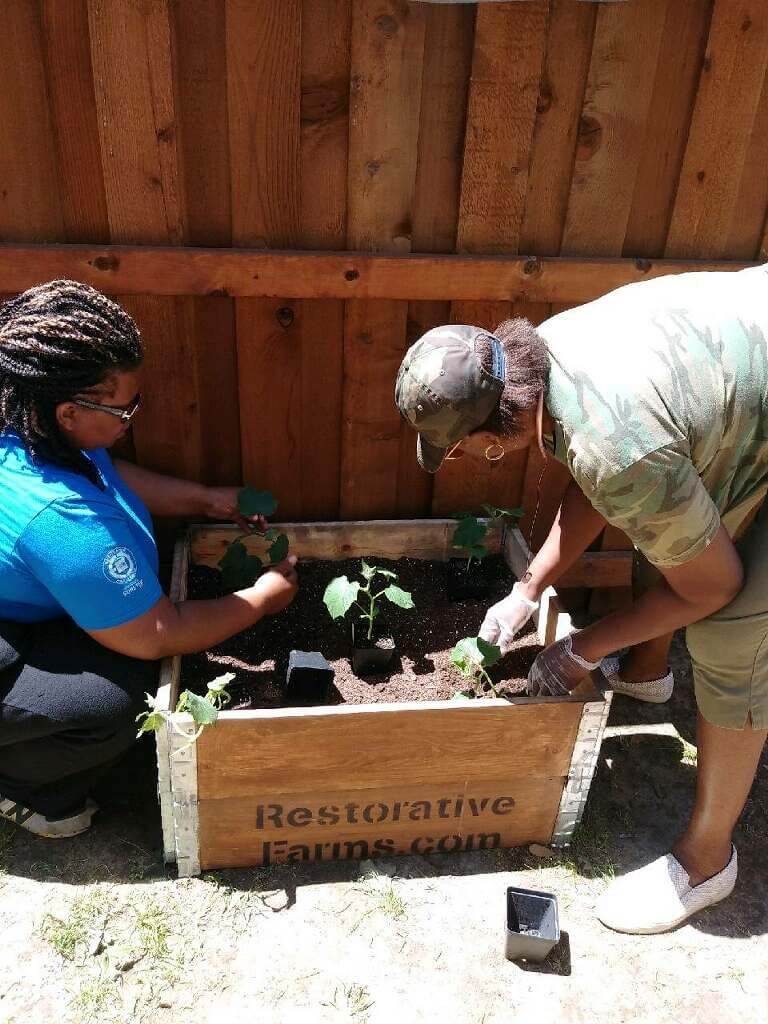 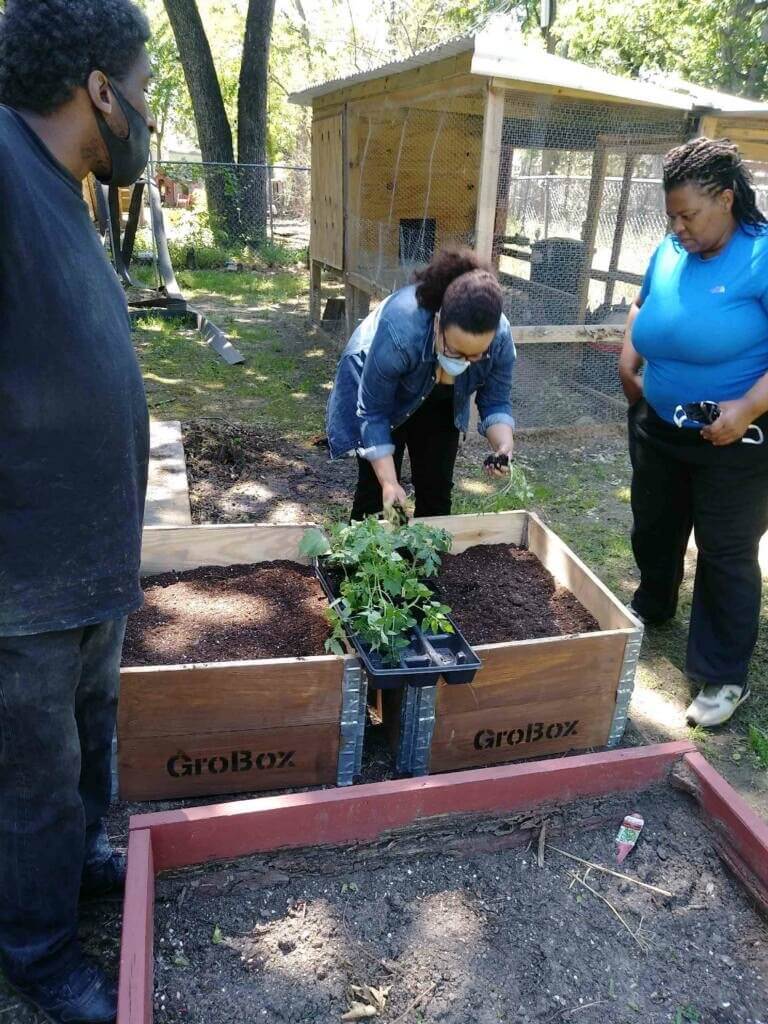 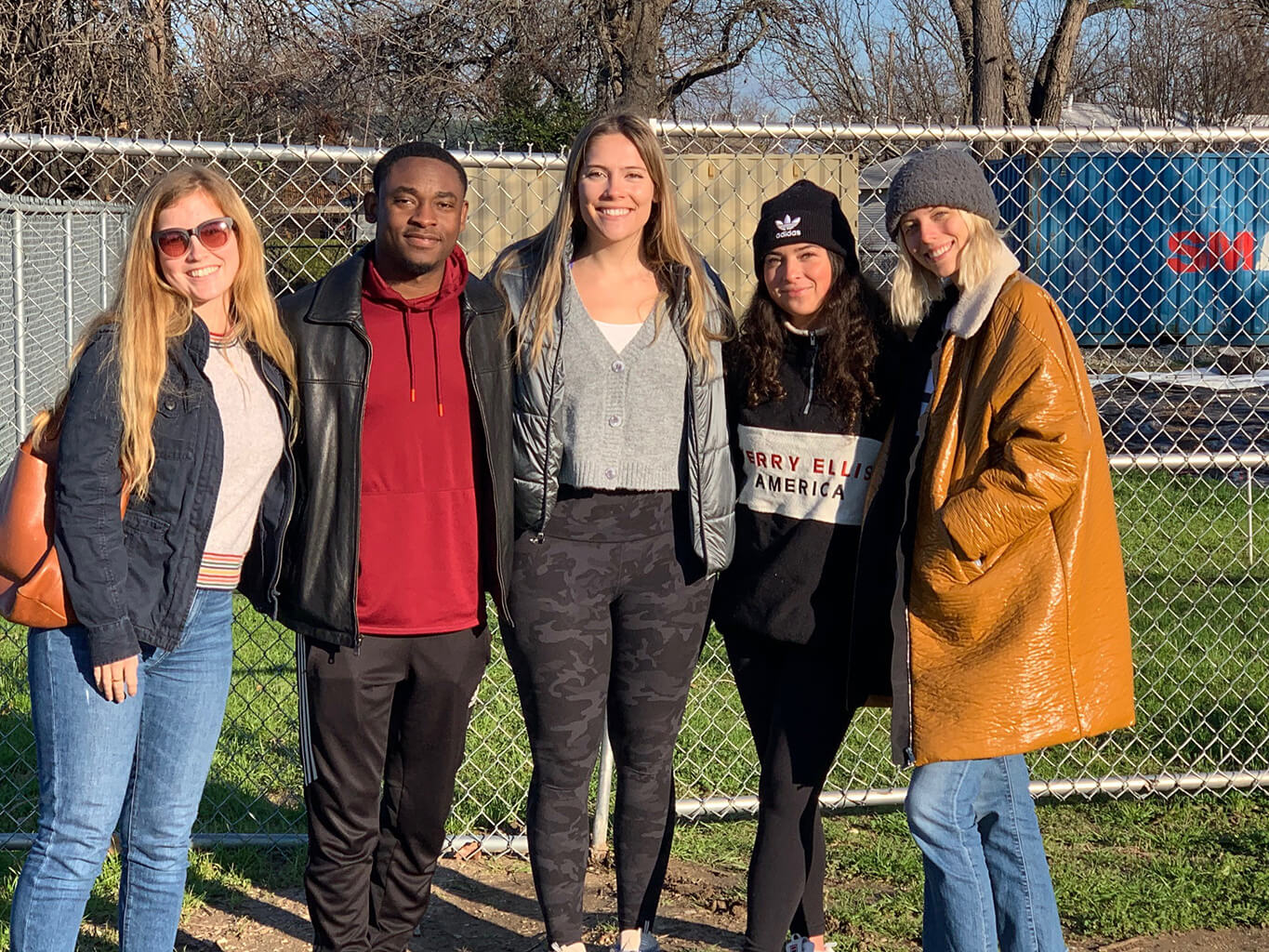 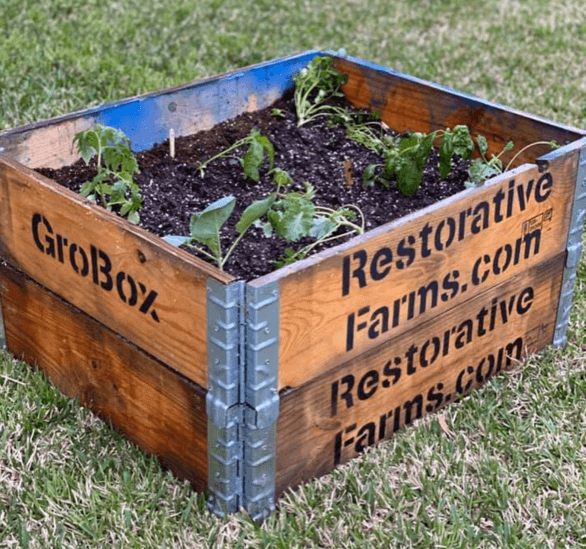 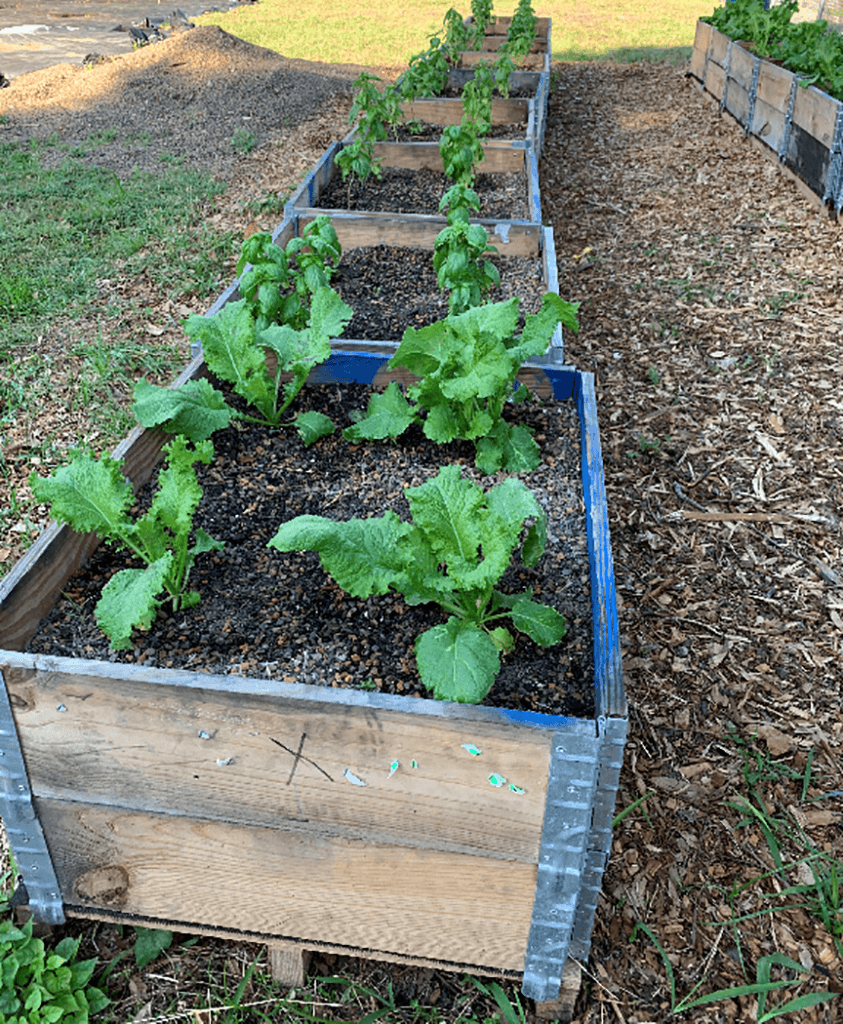