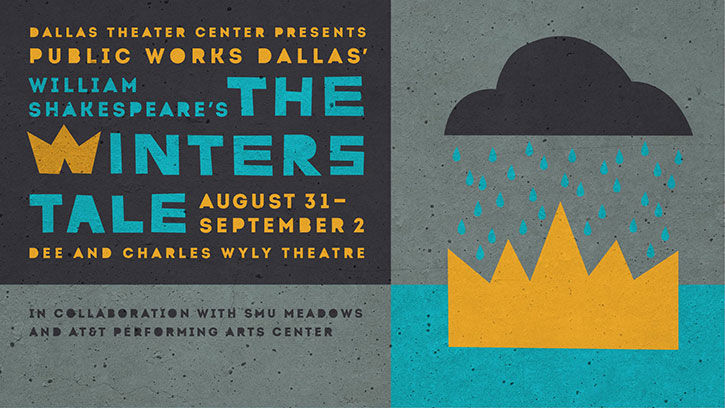 Public Works Dallas is a groundbreaking community engagement and participatory theater project designed to deliberately blur the line between professional artists and Dallas community members, and launched last year with the help of the Meadows School’s Ignite/Arts Dallas and Meadows Prize. Directed by Kent Gash, The Winter’s Tale will run for five performances from Friday, Aug. 31 to Sunday, Sept. 2 at the Dee and Charles Wyly Theatre. Performances are at 8 p.m. Friday and Saturday, 2:30 p.m. Saturday and Sunday, and 7:30 p.m. Sunday. Tickets to The Winter’s Tale are free to the public, two per person.

The production is almost sold out; patrons can check availability online or by phone at 214-880-0202.

Written by William Shakespeare, The Winter’s Tale features adaptation, music, and new lyrics by Todd Almond. Shakespeare’s tale of mystery and magic is brought to life as never before and will explode with authentic performances that come together to tell the beloved fable of hard-won joy and the promise of renewal.

The musical adaptation of The Winter’s Tale will feature 200 actors and community members, only five of whom are professional actors. Starring as Leontes/Autolycus is J.D. Mollison, who has performed in theaters across the country in productions on Broadway, off-Broadway, and regionally. Joining him are Diane and Hal Brierley Resident Acting Company members and Meadows theatre alumni Tiana Kaye Johnson as Hermione and Sally Nystuen Vahle as Paulina; Brierley member Liz Mikel as Antigonus; and Cara Mía Theatre Artistic Ensemble member Ivan Jasso as Polixenes. Making up the majority of the cast are community actors from Public Works Dallas’ five community partner organizations: Bachman Lake Together, City of Dallas Park and Recreation Department, Jubilee Park and Community Center, Literacy Achieves and Literacy Instruction for Texas.