Let Me Talk My Dreams 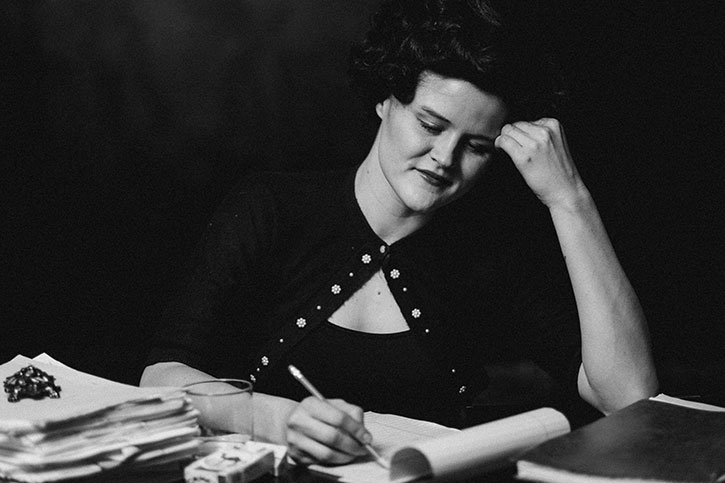 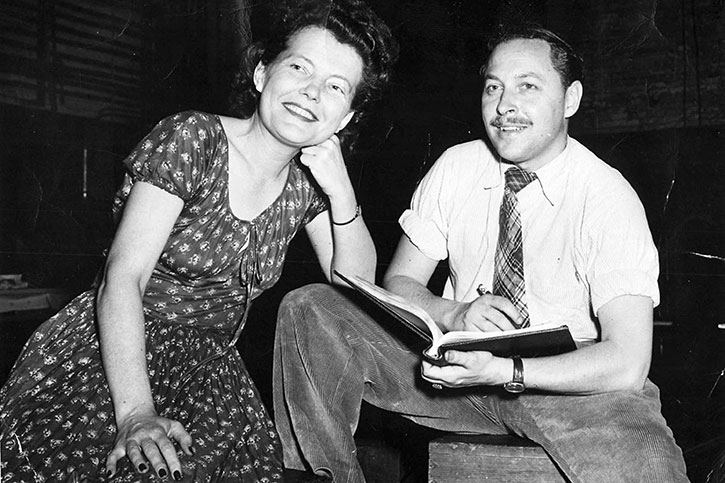 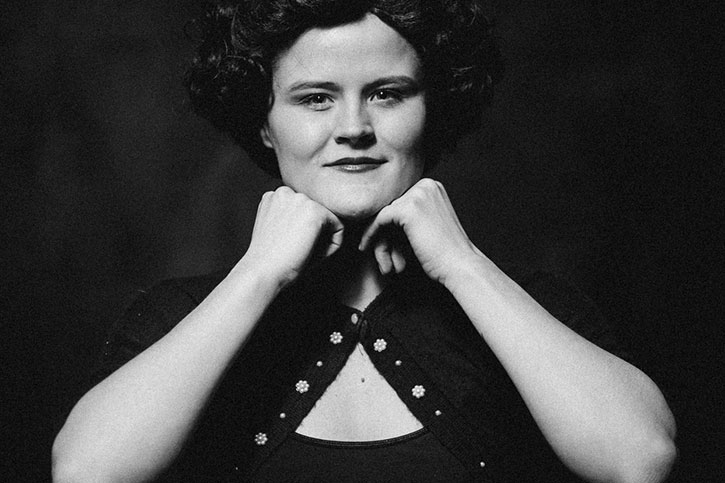 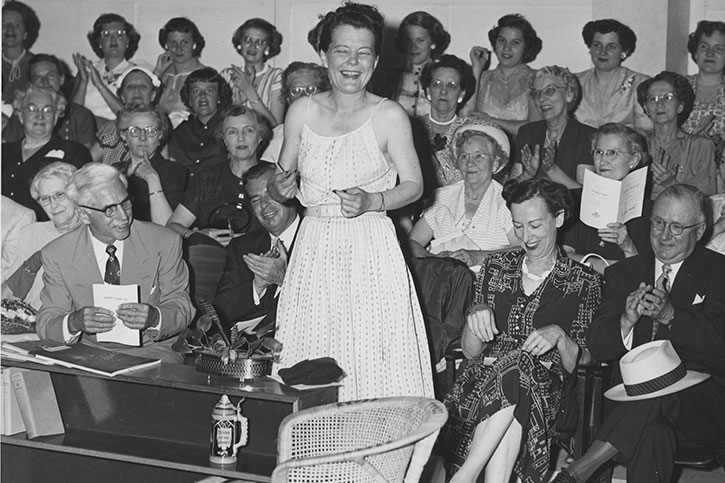 Let Me Talk My Dreams, a new play about the life of theatre firebrand Margo Jones, will premiere at Dallas’ original Margo Jones Theatre in Fair Park, May 24–28, thanks to a year’s worth of work by actor and playwright Ana Hagedorn (M.F.A. Theatre ’18) and the collaboration of Hagedorn’s colleagues, many of whom are Meadows faculty, students and alumni.

The play is a dynamic account of how Jones’ risk-taking, moxie and perseverance changed the American theatrical landscape. Because of Jones’ efforts in the 1930s, ’40s and ’50s, professional theatre companies took root beyond New York and spread throughout the country. She championed the then-new theatre-in-the-round concept, now popularly known as black box theatre. An entrepreneurial director in Dallas and on Broadway, Jones opened her stages to new works by playwrights such as Tennessee Williams (Glass Menagerie), Robert Edwin Lee and Jerome Lawrence (Inherit the Wind) and William Inge (Farther Off from Heaven).

The one-woman show, with Hagedorn as Margo Jones, also tells the story of Jones’ private struggles, using many of Jones’ own words gleaned from personal letters, diaries, news clippings, interviews and family memories. Jones, according to playwright and friend Tennessee Williams, was “a combination of Joan of Arc and Gene Autry – and nitroglycerine.”

How the play grew from class assignment to the stage

Hagedorn’s fascination with Jones started when she was cast as “Jesse H. Dunlap” in the Dallas Theater Center production of Inherit the Wind in April 2017. “DTC Artistic Director Kevin Moriarty directed the show and told us a lot about Margo,” she says. “That led me to read Helen Sheehy’s book, Margo: The Life and Theatre of Margo Jones, which just enraptured me. When it came to the part about her death, I cried. I felt that I had lost someone significant. From that moment, I was convinced there was something here that needs to be told.”

As part of the M.F.A. curriculum, Hagedorn took a “Solo Performance” course taught by Professor of Theatre Rhonda Blair in fall 2017, in which she had to write a 30- to 45-minute solo play for the stage. “I knew that class would be the first step in developing and creating material about Margo Jones,” says Hagedorn. “Professor Blair and my classmates helped me figure out how to piece this performance together, all in hopes for a bigger production down the road.”

Before beginning her “Solo Performance” class, Hagedorn spent her summer gathering research to ensure she would have enough material and knowledge to begin writing Margo’s story. She spent hours in the Dallas Public Library and traveled to Houston to meet Margo Jones’ niece, Judy Jones, who gave her permission to examine Margo Jones’ papers. “I’ve read thousands and thousands of pages on Margo: dissertations, personal letters, her book, interviews from people, you name it, I've probably read it,” she says.

“The class helped me develop a structure for the play,” says Hagedorn. “Then at the end of the semester, I workshopped it in the Kathy Bates Studio at Meadows. At that point I already knew I wanted to develop the play further, so I knew I needed that workshop’s audience feedback on what worked and what was missing.”

With feedback in hand, Hagedorn returned to the keyboard and kept writing, tweaking and researching. She wrote grant requests, traveled to The University of Texas at Austin to read personal letters between Margo Jones and Tennessee Williams at the Harry Ransom Center, and started assembling the show’s creative team. She developed a thorough marketing plan to inform the public about Margo, including recording an audio book of Jones’ 1951 “Theatre in the Round” and creating displays for the lobby for audience members to read more about Jones’ life.

“This is definitely not all me,” she says. “I’ve had help and input from SMU faculty, student and alum colleagues, and support from the Meadows Division of Theatre. This project has been in the spirit of Margo. I get to create this new work and I also get to have, and help, artists whom I believe in. I’m lucky to surround myself with talent that can really bring Margo’s story to the world in a beautiful and fine way. Just how I think Margo would have wanted it.”

At the time of Margo Jones’ death, Jones was aware that she had inspired the startup of a small handful of regional professional theatres in other cities, including her own theatre in Dallas. But she didn’t live long enough to see her vision come to full fruition. Today, approximately 300 professional theatres are located across the United States, including award-winning organizations founded by Meadows theatre grads, such as the Signature Theatre in New York, The House Theatre in Chicago and Kitchen Dog Theatre and Prism Co in Dallas.

Jones had an inner fire for the arts, says Hagedorn. “Her vision can inspire people today. Let Me Talk My Dreams reintroduces audiences to Margo, the real-life Dallas-based theatre legend and innovator. It illuminates her passion, rigor, humor and tornado-like energy.”

Read more about Let Me Talk My Dreams, Ana Hagedorn and the SMU Meadows Division of Theatre.

Creative team for Let Me Talk My Dreams

In addition to playwright/actor Ana Hagedorn, the Let Me Talk My Dreams creative team includes SMU Meadows alumni and other theatre colleagues.

Set and costume design is by Amelia Bransky (M.F.A. Theatre Design ’18), who recently designed the sets for a 2017 production of Frankenstein, a collaboration between Dallas Theater Center and SMU Meadows. In a positive review in The Dallas Morning News, DTC’s associate artistic director Joel Ferrell called Bransky’s work “stunning” and “one of the more elaborate things that we’ve done in the Kalita [Humphreys Theatre].” In preparation for future bookings of Let Me Talk My Dreams in other venues, the set was designed to travel.

Director Josh Kumler (B.F.A. Theatre ’14), founder of the Bar Politics troupe in Dallas, also recorded an audiobook of Jones’ 1951 book, Theatre in the Round. Voiced by Hagedorn, it will be available soon on the Let Me Talk My Dreams website.