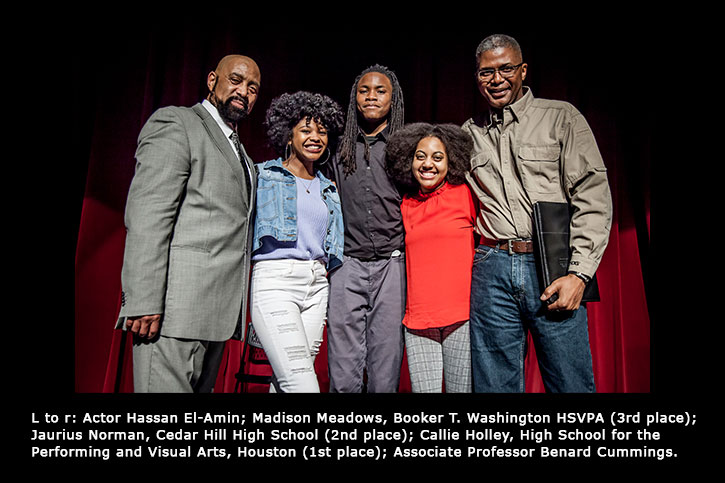 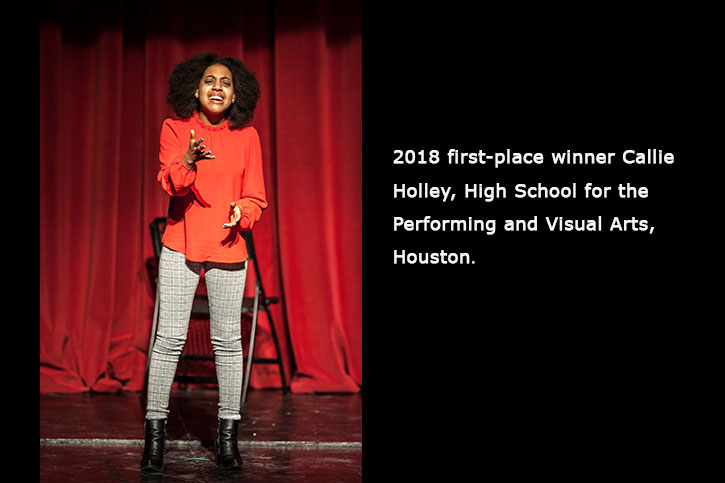 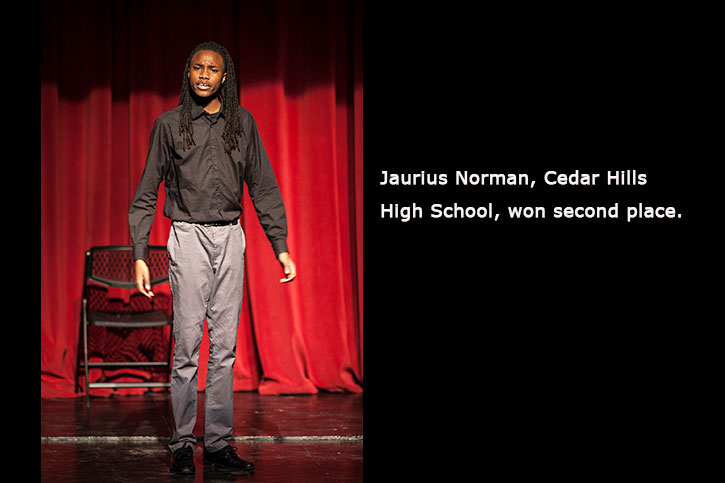 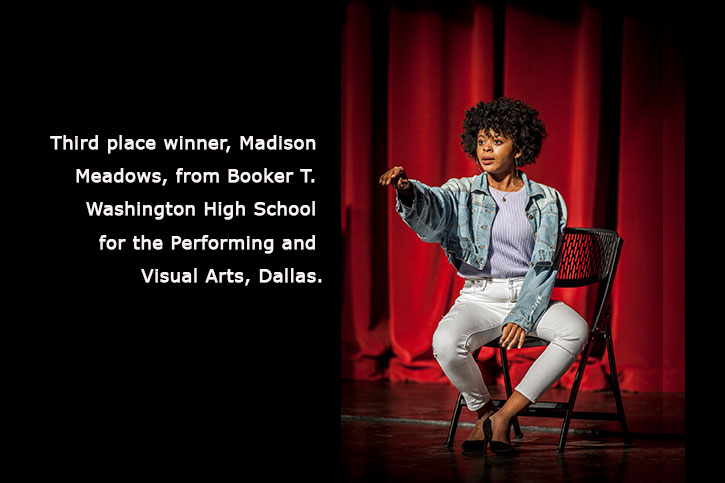 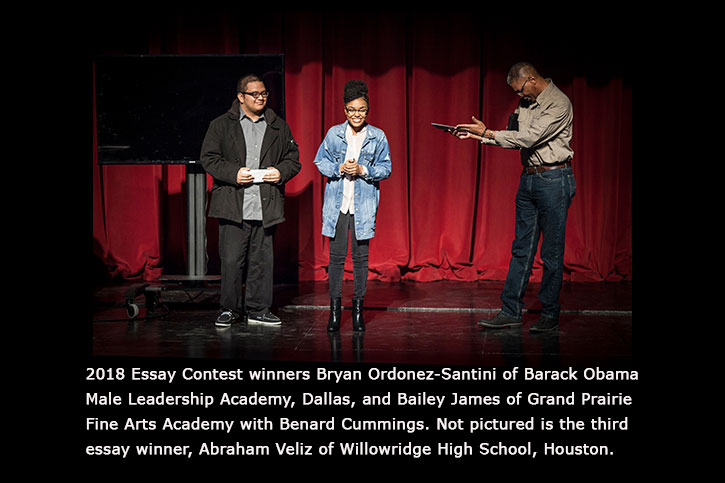 On February 19, 23 students from multiple Texas high schools gave it their all on the Bob Hope stage at Meadows School of the Arts in Dallas as they vied for an all-expenses-paid trip to the national August Wilson Monologue Competition finals in New York City. Three top winners from the Dallas Region were selected, including Callie Holley, High School for the Performing and Visual Arts, Houston (1st place); Jaurius Norman, Cedar Hill High School, Cedar Hill (2nd place); and Madison Meadows, Booker T. Washington High School for the Performing and Visual Arts, Dallas (3rd place).

Each of the contestants performed a two- to three-minute monologue from one of playwright August Wilson’s “Century Cycle” award-winning plays, all of which depict the African American experience in the 20th century.

Holley and Norman will advance to the national finals, to be held May 7 at Broadway’s August Wilson Theatre in New York. There, they will compete against regional winners from Atlanta, Boston, Buffalo, Chicago, Greensboro, Los Angeles, New Haven, New York, Pittsburgh, Portland and Seattle for scholarships, cash awards and their own set of Wilson’s Century Cycle collection of plays. The national finalists also will be treated to a Broadway production and will meet established actors, who in the past have included Denzel Washington, Phylicia Rashad and other stars of the stage. If either Holley or Norman is unable to make the trip, Meadows will serve as alternate.

“What has amazed me about this competition is how it is expanding to include other Texas cities,” said Associate Professor Benard Cummings, who established the Dallas regional competition after working with the national competition for several years. “We had Houston, Austin and Tyler join us this year, and three schools from San Antonio – which sent faculty representatives to observe our prelims – were blown away by the competition and are slated to join us next year. It is growing statewide, and I am very proud of this unexpected turn of events.”

Throughout the Dallas Region competition, several theatre students and recent alumni from Meadows School of the Arts assisted Cummings by coaching the high school competitors in a series of workshops. Co-coordinators for Cummings this year were Kyle Douglas (B.F.A. Theatre ’18) and Katie Ibrahim (B.F.A. Theatre ’18).

Additional Meadows students and recent alumni who helped with the 2018 event include:

The Dallas Region event of the national August Wilson Monologue Competition is sponsored by SMU Meadows School of the Arts. National presenters are True Colors Theatre Company of Atlanta and Jujamcyn Theaters of New York. National sponsors are Delta and Aetna.

August Wilson (1945-2005) is an American playwright best known for the “Century Cycle,” a collection of 10 plays about the African American experience in the twentieth century. Most are set in the Hill District of Pittsburgh where Wilson grew up.

One of Wilson’s plays, Fences, was adapted into a movie starring Denzel Washington and Viola Davis and was nominated for four Academy Awards in 2017: Best Picture; Actor; Supporting Actress; and Writing (Adapted Screenplay). The original Fences opened on Broadway in 1987 and starred James Earl Jones. It earned $11 million in one year, as well as a Pulitzer Prize and multiple Tony Awards. Wilson’s The Piano Lesson, set in the 1930s, was nominated for the Tony in five categories and won the Pulitzer Prize for Drama in 1990.

The New York Times calls his series of plays a “landmark in the history of black culture, of American literature and of Broadway theater.”

The August Wilson Theater is on Broadway, on 52nd Street. It is one of several theatres owned by Jujamcyn Theatres, which also owns the Eugene O’Neill, Al Hirschfeld, St. James and Walter Kerr theatres.