David Smith enrolled at SMU after 20 years in the military. With undergrad and graduate degrees in aeronautical science already in hand, the former helicopter pilot is now pursuing art and creative computing degrees at SMU Meadows, thanks to the G.I. Bill.

There is a fireman’s pole in the middle of the office. The walls are painted wake-up yellow, blue, red; a creative team huddles around a computer screen, working out logistics for a smash-hit presentation for an Activision convention. This is a typical day at 900lbs of Creative, a collective of interactive designers who combine art and technology to create “wow” factors for clients’ events, exhibits and digital displays. David Smith, an art and creative computation double major at SMU Meadows School of the Arts, completed an internship with 900lbs in spring 2016.

“I got an email from the faculty about the internship,” says Smith. “It was originally for a video project, but I really wanted to do coding instead. I sent 900lbs my background info and they invited me in for an interview.”

900lbs Technical Director Cole Wiser says his jaw dropped when Smith applied for the internship. “If I can be candid, here?” says Wiser. “Dave’s badass. I was blown away with his experience and backstory. Almost two decades serving our country flying helicopters all over the world in both the Army and Coast Guard and he wants to be our intern?! He was a perfect fit. He came in and immediately fit with the culture.”

Smith is not a typical college student: He is 45 years old and already holds undergraduate and master’s degrees in aeronautical studies with concentrations in computer science. When he graduated from Embry-Riddle Aeronautical University in 1992, he started his Army career as a second lieutenant and flew Hueys and Blackhawks for the Army’s air ambulance for nine years. After a brief stint in the National Guard, he returned to active duty in the Coast Guard, flying Dolphins (H-65 helicopters, certified for all-weather and nighttime operations) and taught at the Coast Guard Aviation Training Center in Mobile, Ala.

So why is he now a student at SMU Meadows School of the Arts? 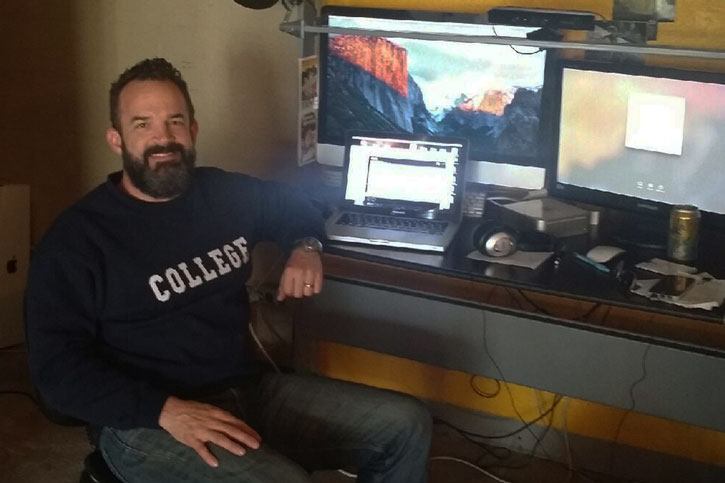 “I’ve always loved computer science and did a lot of that in high school before I left for college and the military,” says Smith. “I sort of left that standing at the station with the 16-year-old kid who got left behind as I became an adult. I’ve always wanted to revisit that.”

Toward the end of his military career Smith started taking painting and drawing classes and made plans to use the GI Bill to get an art degree. He was accepted to Chicago Art Institute and SMU Meadows; in 2014, he entered Meadows as a first-year B.F.A. Art student. Although he initially concentrated on an art degree, it didn’t take long for Smith to discover the Center of Creative Computation at Meadows. He is now double-majoring in art and creative computing.

Smith appreciates that the staff at 900lbs didn’t make him clean toilets, make coffee or take out the trash during his month-long internship. The very first week, Wiser had Smith dive into the company’s research and development folders. After that, he was brought into creative brainstorming sessions for various projects that could involve touch screens, virtual reality and motion-sensing Kinects. “The first project meeting he was in was for a projection mapping project we were pitching to a massive client,” says Wiser.

In addition, Smith helped lay the groundwork for an internal project for 900lbs, an interactive window display at their headquarters in the Bishop Arts District in Dallas.

“He was able to create a program that will organize small colored particles into the shape of people whenever someone moves in front of the Kinect camera in the window,” says Wiser. “The program recognizes the user’s shape and adjusts the position and animation of the particles in real time, averaging around 25 frames per second. The plan is to rear-project the images onto our front window so passersby on their way to a restaurant or bar down the street can have a little fun seeing themselves in the window as animated explosions of multicolored shapes.”

“The neat part was, Dave figured out a way to use data on sunrise and sunset times to automate the whole project to turn on and off every day. So, the projector, computer and software can all run seamlessly every night without any effort from us.”

Smith’s internship ended before the window display project was finalized, but the company continues to develop the display. Rumor has it that a T. rex may be a character in the final iteration.

The internship added 12 hours a week to Smith’s already full course load, and although he says it was tough at times to manage it all, he is very grateful for the opportunity.

“Straightaway they respected and trusted me to work on their internal and external projects,” says Smith. “It was a great experience.”

Read more about 900lbs of Creative and watch its demo reel.

The Center of Creative Computation

The Center of Creative Computation was founded in 2012 by Professor of Computer Science and Engineering Ira Greenberg and is located in the Meadows School of the Arts’ Owen Arts Center. The program is steadily growing in numbers of students, from 1 in its inaugural year to 53 in 2015-16, 11 of whom will graduate with a B.A. or minor in creative computing in May.

Read more about the B.A. in Creative Computing and its stellar creative computing internships.

The GI Bill and Other Veteran Education Benefits at SMU

Learn more about the many veteran education benefits at SMU.