In 2001, the founder of New York- and Minneapolis-based JAZZDANCE spent two weeks in Havana studying Afro-Cuban folkloric dance, Cuban culture and Latin jazz. There by the grace of a grant from St. Paul-based Jerome Foundation, Buraczeski studied with local artists, soaked up Cuban culture and was squired around town by a government-sanctioned tour guide.

“He pretty much talked the government lines about how ‘everything in Cuba is wonderful,’” Buraczeski recalls. “I had to filter what he was saying, but I learned a lot. I had always wanted to go to Cuba because I love Latin jazz, Latin music in particular, and really wanted to learn something about the dancing there. It was a once-in-a-lifetime trip. It was fantastic.”

When he boarded the plane to go back to the U.S., he was certain it was the last time he’d see Cuba. But 14 years later, he got word that longtime colleague Linda Andrews, founding artistic director of Zenon Dance Company in Minneapolis, was taking her company to Havana and would be performing Buraczeski’s Ezekiel’s Wheel. He jumped on the phone with Andrews and explained every reason why he needed to go with them.

Andrews agreed. In January 2016, Buraczeski will return to Cuba, where he will help Zenon restage Ezekiel’s Wheel at the Teatro José Martí in downtown Havana. Three performances will be held, January 15-17.

“I never thought it would be possible,” says an elated Buraczeski. “This is such a gift.”

Of the numerous original works Buraczeski has created over the past 26 years, Ezekiel’s Wheel is considered one of his signature pieces. Created in the late 1990s in collaboration with percussionist/vocalist Philip Hamilton, with additional input from pianist/arranger Peter Jones, Ezekiel’s Wheel was inspired by the life and work of author, essayist and civil rights activist James Baldwin. The piece embodies Baldwin’s convictions, courage and influence. It is based on what Hamilton and Buraczeski identify as the three “R’s” of James Baldwin: recognition, responsibility and redemption. The work includes haunting audio recordings of Baldwin reading from his own writings. The Chicago Reader called Ezekiel’s Wheel “… a pivotal work …” and The New York Times described it as “ … balm for the soul in troubled times.”

Ezekiel’s Wheel premiered in 1999 in St. Paul and has been restaged several times since in venues such as the Joyce Theater in New York and the Cutler Majestic in Boston, among many others. Buraczeski, who joined the dance faculty at SMU Meadows School of the Arts in 2005, has set the piece on his student dancers three times, most recently in March 2015, to positive reviews.

Buraczeski has a penchant for teaching his students that dance goes beyond movement.

“It’s all about the music for me,” he says. “When I say jazz music, I mean all of it, the many and varied strands that have created one of America’s greatest contributions to world culture. I explore the history of the music and introduce students to the extraordinary men and women who have created this singular, powerful and expressive art form.

“History is always incorporated into my class. It gives the students context and the ability to convey the essence of the movement and inhabit the music.” 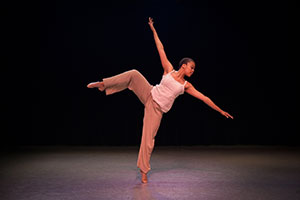 2015 alumna Shauna Davis in the lead soloist role in Ezekiel's Wheel, performed in March 2015 at the Bob Hope Theatre.

When thinking of Ezekiel's Wheel, says Davis, the words “rebuilding,” “hope” and “resilience” come to mind.

“It is a truly timeless piece about community in the face of oppression,” she says. “There are few times as an artist when the work becomes the dance of your ancestors. It becomes something so spiritual and filling that you feel like you're touching uncovered parts of your soul. That was Ezekiel's Wheel for me.”

Davis says she feels honored to have been entrusted with the role of lead soloist. “It was the hardest piece for me to perform emotionally and physically,” she says. “The character of the soloist is the backbone of a hurting community.”

There is a challenging section in the piece where the soloist performs a series of turns, all facing different directions. At one point during rehearsals, Davis thought the turns would be too much for her to master. “After a bout of falling out of them, one day, I made the decision to do fewer, cleaner turns,” she recalls. “After that rehearsal Danny brought this up. I explained my concern, and he clearly and unapologetically said, ‘You can do it, so just do it.’ He had a belief in me that I didn't have and from that point on, I did every turn perfectly. It is so special to have someone like him, with such passion, expectations of excellence and trust in the studio.”

At the time of this writing, Davis was performing in Dallas-based Cara Mía Theatre Co.’s production of Blood Wedding. After the production closes, she plans to move to New York City to pursue a dance career.

The return to Cuba (El regreso a Cuba)

“It’ll be so satisfying, gratifying, to share Ezekiel’s Wheel with another culture,” says Buraczeski of the upcoming performances in Cuba.

On his first trip to Cuba he heard music everywhere. “You walk down the streets and you can hear people singing and playing instruments,” he says. “Music and dance are integral parts of Cuban culture, more so than here in the U.S. It’s part of their everyday lives. With the exception of New Orleans, most people in America regard the arts as something separate from their everyday experience. In Cuba, it’s absolutely vital.”

Buraczeski is grateful for the unexpected chance to return.

“It’ll feed me in so many ways,” he says, “and what I gain there, I’ll bring back to my students.”