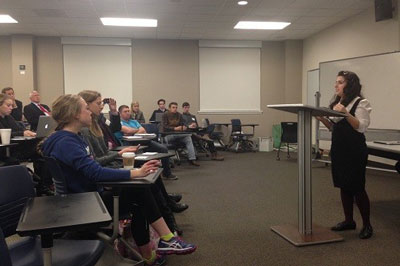 SMU Debate hosted a public debate the evening of December 1 about whether the University should allow the concealed carry of guns on campus. At the debate, held in the Umphrey Lee Center, Hallie Hovey Murray (’16) argued the affirmative, in favor of allowing concealed carry, and Noshin Kuraishi (’15) argued the negative. The format allowed numerous audience members from the student body and community to stand and make arguments for and against the policy. Representatives from the SMU Student Senate, Faculty Senate and SMU Office of Legal Affairs observed the debate. The Student Senate helped sponsor the event, and president Carlton Adams (’16) opened the evening with an explanation of the desirability of student and community feedback, noting the Student Senate will be soliciting additional student feedback about the issue. Before the debate, the initial opening ballot was 33-8 against allowing concealed carry; after the debate, the final vote by the audience was 22-19 in favor of allowing concealed carry.

SMU debate is sponsored by Meadows School of Arts, the Office of the Provost and the Vice President of Student Affairs. The debate program is coached and directed by Dr. Ben Voth, Meadows associate professor of communication studies, and is assisted by Elizabeth Hopp. The award-winning debate program is managed through the Meadows Division of Communication Studies and is open to students of all disciplines at SMU. Students compete at local, regional and national competitions debating important policy questions on such topics as immigration, energy and human rights. For more information about SMU Debate, contact Dr. Ben Voth.