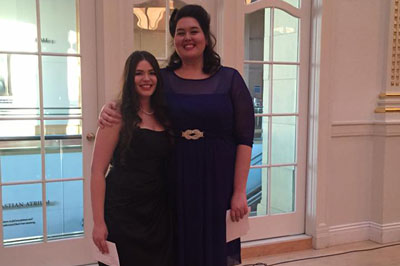 Soprano Michelle Alexander (M.M. Vocal Performance ’15) was named one of two winners of the Utah District level of the prestigious Metropolitan Opera National Council (MONC) Auditions on November 14 in Salt Lake City. Alexander, a Salt Lake City native, also won the Audience Favorite Award. She will advance to the next round, the Rocky Mountain Regional Finals, on January 31 in Denver.

Alexander’s winning performance included a rendition of “Now then! Notebook, Florence!,” the first aria of Lady Billows from Albert Herring, a part she sang with the Meadows Opera Theatre two years ago. She also sang “Dich, teure Halle” from Wagner’s Tannhäuser.

Alexander was previously named a winner of the Utah District Auditions (in 2011) and was a 2014 semi-finalist in the Irma M. Cooper International Vocal Competition. She was also selected audience favorite at the Utah District MONC Auditions in 2011 and 2012.

At Meadows, Alexander was a student of Senior Lecturer in Voice Dale Dietert, with whom she continues to study. She performed leading roles with the Meadows Opera Theatre and won the school’s Ben K. Howard Award for Excellence in Opera. She also created, and continues to help produce, New Opera for a New World, a Meadows School organization sponsoring new works by budding composers, librettists and singing actors.

The winner of the Rocky Mountain Regional competition will advance to the national semifinals in New York City in March to compete against other regional finalists on the stage of the Metropolitan Opera. From there, 10 finalists will be chosen to compete in a public concert, the Grand Finals Concert, accompanied by the Metropolitan Opera Orchestra; the concert will be broadcast nationwide on the Metropolitan Opera Radio Network. The jury will award up to five Grand Winner awards of $15,000 each; the remaining finalists receive $5,000 each, and those singers who were national semifinalists but did not advance to the national finals will be given $1,500 to further their studies. Some of the winners will be invited to participate in the Met’s Lindemann Young Artist Development Program.

The Metropolitan Opera National Council Auditions is a program designed to discover promising young opera singers and assist in the development of their careers. The auditions are held annually in 13 regions of the U.S. and Canada. The Utah District is one of 42 districts within these regions, and provides an opportunity for talented local singers to enter the auditions.