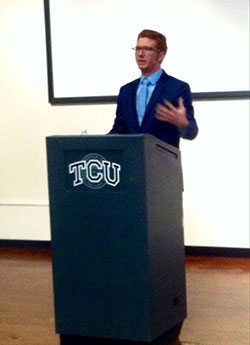 SMU debater Jaden Warren, a junior studying public policy and economics, won the top speaker award in an international parliamentary debate tournament competition co-hosted by TCU and the University of Kentucky in Fort Worth, Oct. 2-4. The tournament was titled “For the Sake of Argument” and featured collegiate competitors from across the nation.

Warren finished as the top seed in the tournament after preliminary rounds and won his semifinal debate on a 3-0 decision; though he lost the final round on a 2-1 decision, he remained the top scorer in the parliamentary debate category.

Parliamentary debate is a one-person format in which competitors have 20 minutes to research and prepare arguments for a debate on an impromptu topic. Warren’s final round of debate was on the topic of climate change. Warren is coached by SMU Meadows Associate Professor and Director of Debate Ben Voth, Dedman College Lecturer of English Ross Sloan and Caress Russell, the James Farmer Jr. Great Debater Fellow at SMU.

SMU’s award-winning debate program is managed through the Meadows Division of Communication Studies and is open to students of all disciplines at SMU. Students compete at local, regional and national competitions debating important policy questions on such topics as immigration, energy and human rights. For more information, visit here or contact Dr. Voth at bvoth@smu.edu.