On to Vegas: M.F.A. Theatre/Stage Design Alum to Compete Live at LDI 2015 in Las Vegas

Luther Frank is headed to an all-expenses paid trip to Las Vegas this October, thanks to his attention-getting lighting design skills demonstrated in the 2015 “Hog Factor” competition sponsored by entertainment lighting manufacturer High End of Austin. High End is sending Frank, along with finalists from Carnegie Mellon and Webster University, to the lighting industry’s biggest annual convention to compete live at the High End booth. Competitors will program their light shows using High End’s Hog platform software and hardware. Prizes include a $44,000 Hog 4 lighting console, other High End gear and a $20,000 scholarship for the first-place team’s school.

The 2015 LDI is expected to attract 10,000 attendees from all over the world, including manufacturers, venue representatives and lighting designers who produce shows for live music and theatrical productions, film and television shows, corporate events, cruise ships, worship services, theme parks and more.

Below, Frank shares a few thoughts about the competition and about his time as an M.F.A. student in SMU Meadows’ Theatre/Stage Design program.

The Hog Factor competition asked competitors to create a design set to one of three songs: Uprising by Muse; Bring Me to Life by Evanescence; or Uptown Funk by Mark Ronson featuring Bruno Mars. Why did you pick Uptown Funk?

The other two options were more rock-n-roll oriented, which is mostly what I've done in the past, and I wanted to step outside my comfort zone a little. New console, new lights, new music. I figured it would help me to keep on my toes and stay invested throughout the process, and not rely on any old habits.

M: How much time did it take you to learn the Hog software and produce your show?

L: This is kind of difficult to answer. I had some previous experience with an earlier version of the programming language as SMU has a Hog II console that I programmed Albert Herring on as assistant lighting designer in 2013. However, the current console is the Hog 4, and there have been significant changes to how things work. This competition was my first interaction with the new language so it took some getting used to. Not only this, but High End has produced a whole new line of lighting fixtures that I was unfamiliar with. So I had to do some reading on that equipment as well.

I became aware of the competition in March, and soon after began studying and preparing my work. The actual programming didn't take very long but there was a lot of research that I did beforehand to make sure I knew what I was doing.

M: Can we see a video of your entry?

L: Sure! The High End website has videos of all three finalists. Look for the one titled “Team Lightlander.”

M: How did you put your entry together?

L: Phase One of the competition was all virtual. High End provided us with a package of downloadable software. Included was a virtual version of the console on which to program and a limited use license for a program called LightConverse that had a pre-built lighting rig that would render the programming live in 3D. After that, the teams had to decide how to play their audio, run their show and record their video. This is a very tricky process and I heard from other competitors that this was a huge challenge.

I ran everything on my own home-built computer. I set up a three-monitor system so that I could see everything at a glance. One monitor for the virtual console, one monitor for LightConverse and one monitor for audio playback and internal video capture. It took longer to get everything working properly for the recording process than it did to actually program the light show. I'm looking forward to not having to deal with that portion at LDI.

L: The live Hog Factor finals in Vegas will be fully realized. They will have us program our shows at their booth, which is effectively a large showcase of all of their gear at work.

M: What does this year’s LDI show and your participation in it mean to you?

L: This is really exciting for me. I haven't been to LDI since 2010 when it was in Orlando. Back then I had a blast but everyone I met kept telling me “It's better in Vegas.” Now to be invited to Vegas, all expenses paid, to show some of my work at one of the biggest events in my industry is pretty phenomenal. It’s hard to sum up the experience until you've gone, especially due to the fact that everything happening at the event is cutting edge, new and unexpected. I imagine it's going to be a little overwhelming.

M: The big prizes for Phase Two in Las Vegas mostly go to the college, not the individual. Now that you’ve graduated, how will the prizes be handled?

L: I thought this was a really great part of the competition. In my opinion, it only makes sense to give the scholarship and the equipment to the colleges themselves. I love this, as it allows me to give back to my university far sooner than my finances would allow. It's also a great gift to the next group of lighting designers at SMU. I received all kinds of assistance from SMU Meadows alumni and I'm glad I get to pay that forward so soon.

M: You are now working in New York City. Is there are particular type of client you are pursuing— live music shows, theatre productions, conventions, etc.?

L: I believe that when you choose to go into this field, you have to invite and accept a certain degree of chaos into your life. At this very early stage, I think it's important to stay open to any and all opportunities that may come. I’m currently chasing young artists and choreographers who are doing some interesting work, but I’m also trying to sit in, observe and hopefully work with some of the bigger names on Broadway as well.

M: Why did you select SMU Meadows to get your master’s degree?

L: The entertainment world is small, and it's even smaller at the collegiate level. When you apply to a design program, you’re applying to surround yourself with the same 10-20 people for three years, often working long hours late into the night. SMU has great professors who recruit incredibly high caliber students and has a very skilled technical staff with just enough resources to challenge you. I saw SMU as a perfect storm of talent, resources, and grit that I felt would help me achieve the most artistic growth possible during my time there. In the end, I'm fairly certain I made a smart decision.

L: Absolutely. I'd just want to let anyone reading know that I’m always willing to talk. Current students, prospective students, future participants in the Hog Factor Competition, or anyone else shouldn’t hesitate to contact me. I’m more than happy to answer any questions or help in any way possible. My contact information should stay accurate at my website. 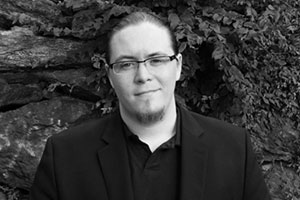