Under the leadership of Clyde Valentín, Meadows' new initiative has big goals 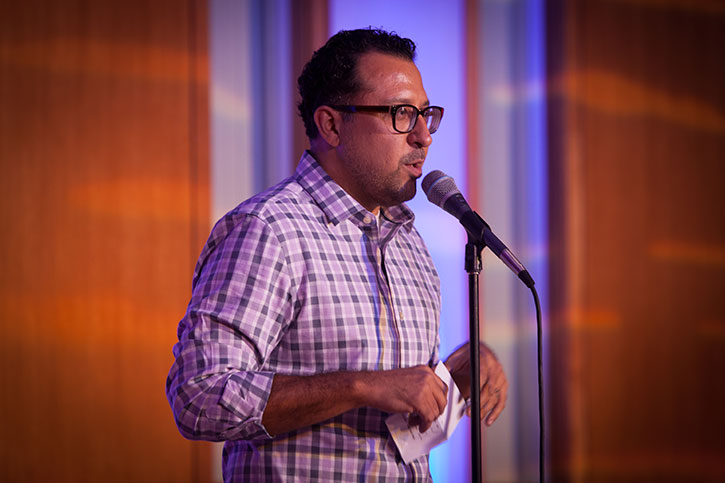 SMU’s Meadows School of the Arts has launched a new initiative, Ignite Arts Dallas, which will focus on the intersection of arts and community engagement between Meadows School students, the wider SMU campus, the city of Dallas and the arts field at large. Under the leadership of Clyde Valentín, Meadows School staff member and former executive director of the New York City-based Hip-Hop Theater Festival, Ignite Arts Dallas will integrate artistic practices with community engagement in Dallas and other communities across the country.

“Over the past several years the Meadows School has increasingly focused on the intersection of the arts and social engagement,” said Sam Holland, the Algur H. Meadows Dean of the Meadows School of the Arts. “Ignite Arts Dallas will bring together under one umbrella our existing programs in these areas, like the annual Meadows Prize, and spark new ideas for programs that will position the Meadows School and Dallas as a national model for art as civic practice.”

The school’s annual Meadows Prize invites internationally recognized artists and scholars to interact with Meadows students and create a lasting work in Dallas, and students and faculty from throughout the school’s 11 disciplines are involved with projects that support diverse communities in the city. The 2015 winners of the Meadows Prize residency are the Detroit-based artist collective Complex Movements and Lear deBessonet, the director of The Public Theater’s Public Works program in New York City.

A second major project of Ignite Arts Dallas, titled P3, will present non-traditional, multidisciplinary performance art work exploring the themes of racial and cultural equity, religion, immigration and the environment. An inaugural gift of $225,000 from the Embrey Family Foundation will enable P3 to showcase four works in Dallas between fall 2015 and fall 2017. The works will feature international, national and local artists working in collaboration with SMU students and community members. P3 also plans to commission a work from a local artist to be developed and produced in Dallas in spring 2017.

“The P3 series is designed to ‘seed’ a pipeline where creators of mid-size performance art projects begin to make Dallas a regular location for the development and presentation of work,” said Valentín. “It is also a vital way to reach into the community and collaborate with organizations such as the AT&T Performing Arts Center, the South Dallas Cultural Center, Dallas Video Fest and others, while offering our students experiences beyond the classroom and the campus.”

The third major program of Ignite Arts Dallas will be the Dallas Arts Project, which will help bring work created in Dallas to completion and will advocate for exporting it to other communities.. Through myriad cultural collaborations and interactions, Valentín and Meadows School faculty members and students will work to enhance Dallas’s existing arts and culture ecosystem and encourage people to think of Dallas’s culture in new ways while connecting that cultural energy to other creative communities around the country.

“Our vision for Ignite Arts Dallas is to engage in deep relationships with the broader Dallas community and to introduce students to the arts’ critical role in social engagement,” said Valentín. “Our tagline is ‘people, place, purpose,’ the main ingredients that create meaningful change, with the arts serving as a connector between various sectors that build community. The arts have the ability to shape the narrative of progress for Dallas and other urban centers across the country. Through our work with exemplary artists, cultural organizers and artistic scholars, we will contribute to a vision of our cities where the arts are integrated into our communities and where the modern urban fabric is built on a foundation of equity and sustainability.”

Prior to joining the staff of the Meadows School in 2013, Clyde Valentín served as executive director of the New York City-based Hip-Hop Theater Festival (HHTF), where he oversaw its transition to become Hi-ARTS, an arts organization fostering creative, multi-disciplinary work, outreach and education through the hip-hop art and culture movement. Known as one of the most influential outlets showcasing hip-hop performing arts, HHTF has presented hundreds of artists and introduced diverse, national audiences to the stories, people, music, dance and word of hip-hop. Under Valentín’s leadership, HHTF presentations and productions appeared in major urban centers around the United States.

Valentín is a Fellow of the National Arts Strategies Community and Culture Chief Executive Program and a former Fellow at the DeVos Institute for Arts Management. He serves on the Art Advisory Board for the Times Square Alliance, is a board member for the Theatre Communications Group, is an advisor for the New England Foundation for the Arts National Theater Project and serves on the Steering Committee for the Latino Theater Commons. He also advises on leadership development for nonprofit leaders with the Association for Performing Arts Presenters. He has presented at numerous conferences including the National Association of Latino Arts & Culture, Association of Performing Arts Presenters and the National Performance Network’s Annual Meeting. Valentín was born and raised in Sunset Park, Brooklyn.

Inaugurated in 2009, the Meadows Prize is presented annually to up to two pioneering artists. It includes support for a residency in Dallas, in addition to a $25,000 stipend. In return, recipients are expected to interact in a substantive way with Meadows students and collaborating arts organizations, and to leave a lasting legacy in Dallas, such as a work of art that remains in the community, a composition or piece of dramatic writing that would be performed locally, or a new way of teaching in a particular discipline.

Meadows Prize recipients must be pioneering artists and scholars active in a discipline represented by one of the academic units within the Meadows School: advertising, art, art history, arts management and arts entrepreneurship, communication studies, dance, film and media arts, journalism, music and theatre.