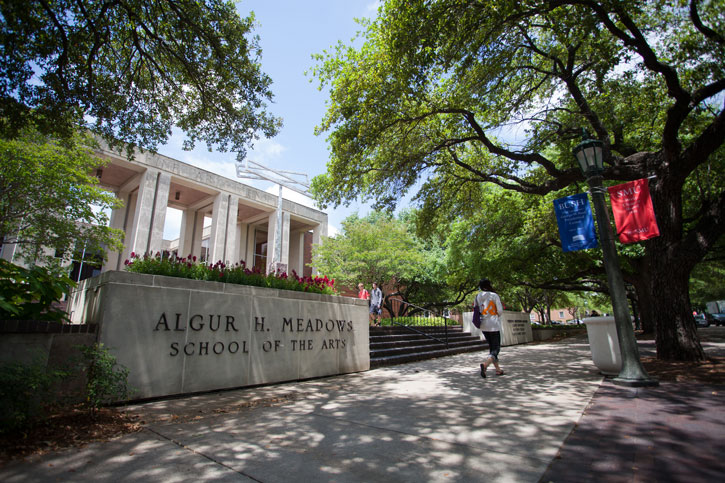 Every spring, individual divisions of the Meadows School of the Arts select outstanding students for special awards recognizing their scholarship, creative talent and community involvement. Students also may be honored by their divisions by being selected to serve as a Reader or Marshal for Commencement.

In addition, a number of Meadows students and faculty have been honored with special awards from the University for 2015.

Winners of the SMU and Meadows School of the Arts departmental awards for 2015 are as follows (all are graduating seniors unless otherwise noted):

Michele Houston, senior lecturer in journalism and TV studio and newsroom manager, was one of three recipients of the Extra Mile Award, presented by Students for New Learning for graciousness and sensitivity to students with learning differences.

Seniors Katelyn Hall, journalism, and Geenah Krisht, film and media arts, were among the winners of this year’s “M” Award, SMU’s most prestigious honor, which recognizes contributions to the University “above and beyond the call of duty.”

Advertising senior Quang (Peter) Ngo was one of six recipients of the John L. Freehafer Memorial Award, given by the University to a select few students every year who have demonstrated an interest in student life, activities and government.

Journalism senior Alyssa Parrish was among the five winners of the Sheri Mooney Memorial Scholarship Award from the Office of the Chaplain. The award is presented to students whose Christian faith is evident as a recognizable priority in their day-to-day campus life.

Advertising senior Sydney Kamp was a winner of the A. Kenneth Pye Outstanding Greek Leader Award. The highest award for Greek life at SMU, it is presented each year to six graduating seniors across all four Greek councils (Inter-Fraternity Council, Panhellenic Council, National Pan-Hellenic Council and the Multicultural Greek Council).

Division of Film and Media Arts

The prize, named after the first dean of the Meadows School of Music (1916-1918), is presented to the pianist who performs with the Meadows Symphony Orchestra as the winner of the annual Concerto Competition.