"Should the U.S. legalize and regulate marijuana?" 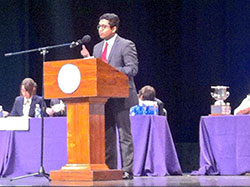 SMU Debate team members Rahfin Faruk (B.A. in economics ’15) and Arvind Venkataraman (B.B.A. in finance ’15) ranked among the top debate teams in the country during the annual Madison Cup competition, held April 19 and 20 at James Madison University in Harrisburg, Va.

Over 30 teams debated the topic, “This house believes that the United States should legalize and regulate marijuana for recreational use.”

SMU debated against legalization and regulation. For their efforts the duo took fourth place overall, besting teams from Emory, Yale, Cornell, NYU, Miami and George Washington University. Faruk and Venkataraman each won $1,000 and the SMU Debate team was also awarded $1,000, courtesy of the competition sponsor, the Arthur N. Rupe Foundation.

The SMU Debate team is housed in the Meadows School of the Arts and meets every Tuesday at 5 p.m. in Umphrey Lee, room 247 during the fall and spring semester. Participation is open to all students.