Meadows will perform as part of The Nancy A. Nasher and David J. Haemisegger Family Soluna International Music & Arts Festival. May 10 at 2:30 p.m. 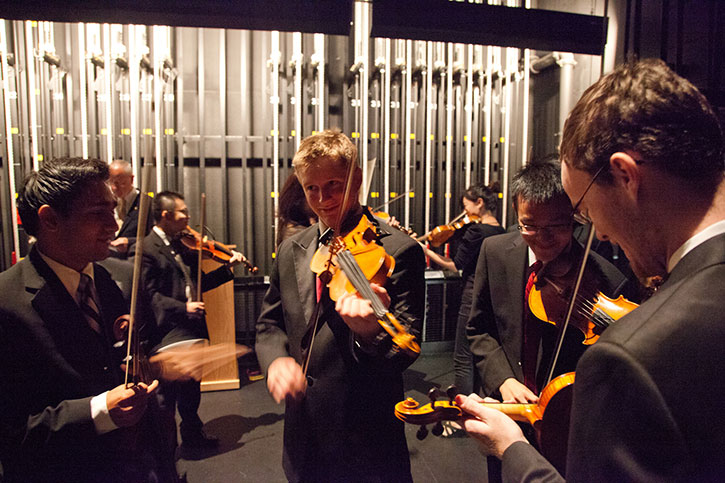 SMU Meadows School of the Arts’ critically acclaimed Meadows Symphony Orchestra (MSO) will perform at the 2015 SOLUNA International Music & Arts Festival at 2:30 p.m. Sunday, May 10 in the Meyerson Symphony Center, 2301 Flora St.in Dallas. The event is the final offering in the Meadows School’s Community Series for 2014-15.

Under the direction of conductor Paul Phillips, the concert will reprise three works presented earlier in the MSO season. Above Light by award-winning Meadows faculty composer Xi Wang is a tribute to the elegance and colorfulness of Japanese composer Toru Takemitsu’s imaginary soundscapes. Concerto for Piano No. 2 in G minor by Camille Saint-Saens, considered the composer’s most popular piano concerto, will feature guest pianist Hando Nahkur, an international prizewinning performer from Estonia and the first student accepted into Meadows’ prestigious Artist Diploma program. The third work on the program is Rachmaninoff’s imaginative and lively Symphonic Dances.

The inaugural SOLUNA International Music & Arts Festival has been organized by the Dallas Symphony Orchestra and will be held May 4-24, 2015. Under the theme Destination (America), the festival will showcase a wide range of local, national and international performing and visual artists in venues throughout the Dallas Arts District.

“Our concert reflects on the SOLUNA theme of creative artists who came to America from diverse countries and contributed to American culture,” said Sam Holland, dean of the Meadows School. “Xi Wang is originally from China; she came to the U.S. to study and remained here, and has enjoyed significant success as a composer. Hando Nahkur is an exceptionally talented pianist from Estonia who was the first student accepted into our prestigious Artist Diploma program. And Rachmaninoff emigrated from Russia to the U.S. in 1917.”

The concert is also part of the Meadows Community Series, which was launched in 2013 to bring performances into the community, feature the work of talented students and engage new audiences at different venues in Dallas.

About the Meadows Symphony Orchestra

Members of the Meadows Symphony Orchestra participate in undergraduate, graduate and performer’s diploma programs at Meadows. The orchestra presents an extensive season of concerts annually and collaborates with the Meadows School’s multiple choral groups, Opera Theatre and Division of Dance. The orchestra is comprised of gifted students from countries around the world, including Kazakhstan, Estonia, Slovak Republic, Japan, Korea, China and Romania, as well as every region of the United States. Many of the orchestra’s students are active as international soloists, participants in major music festivals and prizewinners at international competitions.