Concert by the distinguished Dallas new music ensemble at 7:30 p.m. Sunday, May 3 is free to SMU students, faculty and staff with an SMU I.D. 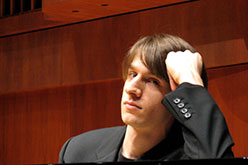 Thomas Schwan, a master’s student in the music composition program at SMU Meadows, will have his 2014 work Trio for piano, violin and cello presented by the Voices of Change on Sunday, May 3 at SMU. The Anniversary Serenade and Sonata concert by Voices of Change, which is considered one of the most distinguished new music ensembles in the country, will take place at 7:30 p.m. in Caruth Auditorium and will also include works by Shostakovich, Bartok and others.Trio will feature Schwan on the piano, with violinist Shu Lee and cellist Marie-Thaïs Levesque Oliver. Admission is free to SMU faculty, staff and students with an SMU I.D. For more information, visit here.

Born in Milan, Italy, in 1985, Schwan is an emerging composer whose music is generating growing interest for its lyrical qualities and a personal approach in the interrelation of time, sound and meaning. Past and upcoming engagements include performances of his music by world-class ensembles and musicians, including violinists Joseph Puglia, concertmaster of the Asko|Schoenberg Ensemble in Amsterdam, and Matt Albert, artist-in-residence at Meadows, as well as the Mitja String Quartet and the Chénier Trio, both in Italy. He has also composed work on commission for the Dallas Chamber Music Society. His next project is a concerto for piano and chamber orchestra, a commission from the SMU Meadows Wind Ensemble that will premiere in the ensemble’s 2015-16 season.

Schwan is also an accomplished pianist and has performed internationally as a recitalist in Italy, the United States, Russia and the Netherlands. He has received top prizes in several international piano and composition competitions, along with academic honors from SMU and from Accademia Chigiana in Siena, Italy.

Schwan is currently completing a master’s degree in composition at SMU in the studio of Dr. Kevin Hanlon, associate professor of music theory and composition. He already holds a master’s degree and an Artist Certificate in piano performance from SMU, where he studied with Meadows Professor of Piano and Joel Estes Tate Chair Joaquín Achúcarro. Next year he will begin doctoral studies in piano performance at the University of North Texas in the studio of Dr. Pamela Mia Paul.

Read more about Meadows Division of Music Department of Theory and Composition.