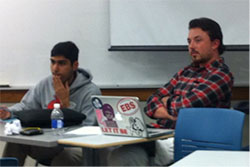 SMU Novice team debated for over 12 hours, using more than 100 pages of evidence

The SMU Debate team added to its list of accolades this year when first-year SMU student Aabid Shivji (B.B.A. and B.A. in economics ’18) was named Top Speaker in the Novice Division by judges at the Junior Varsity National Debate Tournament held in Kansas City, Missouri on March 15.

SMU advanced to the final round of the tournament against the University of Northern Iowa in an effort to reclaim its 2013 title win, but the top team prize was awarded to Northern Iowa, coached by Professor Richard Tews, a former debate student of the director of the SMU Debate team, Dr. Ben Voth.

Shivji and teammate Matthew Nelson (B.A. in public relations and strategic communication ’16) completed the competitive policy debate season for SMU, which began in November 2014, on the topic “Resolved: The United States should legalize all or nearly all of one or more of the following in the United States: marijuana, online gambling, physician-assisted suicide, prostitution, the sale of human organs.” Shivji and Nelson argued for the legalization of prostitution using new internet-based technologies and debated cases about marijuana and prostitution. They completed seven two-hour rounds, debating over 12 continuous hours and reading more than 100 pages of evidence on both sides of the topic. At various stages the SMU team defeated teams from the University of Northern Iowa, Washington University, Butler University and other university teams.

Shivji and Nelson were coached by Director of Speech and Debate Dr. Ben Voth. Assistant Coach Roza Essaw (B.A. in political science; B.A. in human rights; and B.A. in communication studies ’13) also prepared the team for the tournament.

The SMU Debate team is housed in the Meadows School of the Arts and meets every Tuesday at 5 p.m. in Umphrey Lee, room 247. Participation is open to all students.