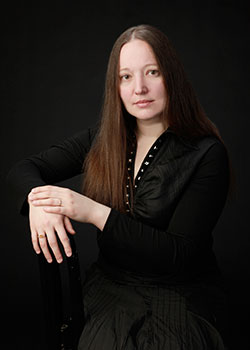 Piano faculty member Liudmila Georgievskaya won two prizes at the Global Music Awards held in California in mid-March. She submitted her recent CD, titled Beethoven Eroica Variation & Schumann Symphonic Etudes, which was awarded a silver medal in the instrumental performer’s division and a bronze medal in the album division. As a silver medalist, she will receive substantial promotional assistance, including free graphics for her next CD, contacts with booking agents, and more.

The Global Music Awards provide a showcase for “original music, unique voices and emerging artists,” according to their website, and aim to “help musicians climb to the next level of their career with media attention, opportunities for professional collaboration and resulting sales and…expose worthy independent music to a wider audience.”

Georgievskaya’s winning CD was released in November 2013 on Odradek Records, a relatively new label; Georgievskaya was one of the first artists to record with them. Odradek also sponsors itinerant music festivals for its artists, including a recent five-city tour in Italy.

The Global Music Awards are the latest honors for Georgievskaya, who earned an Artist Certificate from Meadows in 2010 as a student of Joaquín Achúcarro; she has also won top prizes in 10 national and international piano competitions and been invited to perform with orchestras in the U.S. and Europe.

At the National Trumpet Competition held March 19-21 at Messiah College in Mechanicsburg, Penn., Chelsea Orr (Performer’s Diploma ’15) won second place in the Blackburn Trumpets Graduate Division, competing against 38 other soloists from around the country. SMU’s Trumpet Ensemble, which includes Orr, Peter Stammer (M.M. ’15), Lauren Ewing (M.M ’15), Paul Torrisi (B.M. ’15), Ben Hauser (M.M. ’15) and Brian Garcia (M.M. ’16), garnered second place in the Getzen Trumpet Small Ensemble Division in a field of 30 competitors; third place went to the Curtis Institute of Music and first place to Oklahoma State University. The group performed the second movement of Bartok’s String Quartet No. 2, arranged for the ensemble by Orr. All six members of the Trumpet Ensemble are private trumpet students of Tom Booth, adjunct professor of trumpet and chair of winds and percussion in the Meadows Division of Music.

Inaugurated in 1992, the National Trumpet Competition includes divisions for school and college levels for both soloists and groups. The competition offers performing opportunities, master classes, exhibition concerts and more, and is judged by artists chosen from among the trumpet world’s greatest performers.