SMU's Meadows School of the Arts Presents "Meadows at the Meyerson," March 31 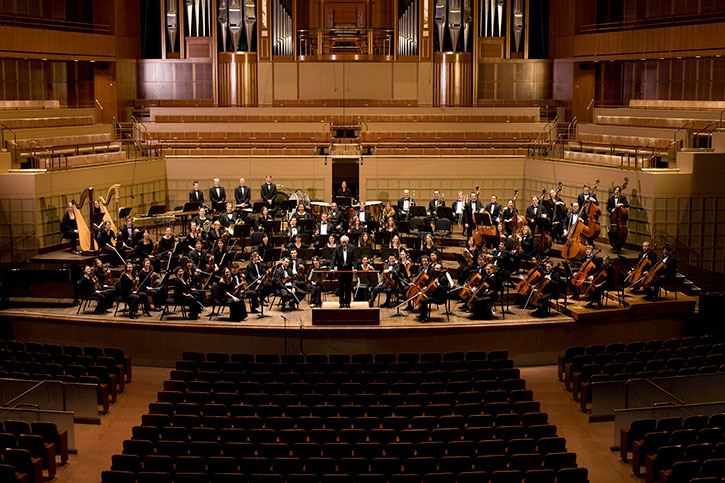 SMU’s Meadows School of the Arts will present its 22nd annual benefit concert, “Meadows at the Meyerson 2015,” at 8 p.m. Tuesday, March 31 in the Morton H. Meyerson Symphony Center, 2301 Flora St. in Dallas. Held each spring, the concert features the critically acclaimed Meadows Symphony Orchestra and honors a community leader. This year’s honoree is noted arts and civic leader Caren Prothro. The 2015 event chair is Heather Furniss, and the honorary chairs are Sarah and Ross Perot, Jr.

The Meadows Symphony, led by conductor Paul Phillips, will be joined by two renowned opera singers – tenor and Meadows faculty member Clifton Forbis and mezzo soprano Michaela Martens – in a presentation of Mahler’s Das Lied von der Erde (“The Song of the Earth”). The hour-long work, based on six 8th-century Chinese poems, was composed after Mahler learned he was terminally ill, and has been called the finest and most deeply moving part of his artistic legacy. Biographer Michael Kennedy wrote, “It is music filled with his love of life, a love sharpened to the point of poignancy by awareness of man’s mortality and the transitory nature of existence.”

Update 3/26: Clifton Forbis will be unable to perform at the Meyerson gala on Tuesday night due to illness. He will be replaced by another renowned opera singer, Thomas Studebaker, who regularly performs with the Metropolitan Opera and other major opera companies worldwide. Studebaker is assistant professor of voice and director of the Lyric Theater Program at Butler University in Indianapolis. He made his debut at the Met in 1997 and has since sung over 60 performances with the company. He has also performed with distinguished conductors and orchestras worldwide, including the New York Philharmonic, London Philharmonic, Tokyo Symphony Orchestra and many others. Full bio available here:

Michaela Martens has performed several leading roles with the Metropolitan Opera this season, including Marilyn Klinghoffer in a new production of The Death of Klinghoffer; Judith in Duke Bluebeard’s Castle; and Gertrud in Hänsel und Gretel, a role she reprised in her premiere with the Bayerische Staatsoper in Munich. This summer she also will be heard as Herodias in Salome with Santa Fe Opera.

Clifton Forbis, who earned his M.M. from SMU Meadows in 1990 and is currently associate professor and chair of the voice department, has performed some of the most demanding tenor repertoire in opera with the world’s major companies. Performances include the role of Siegmund in Wagner’s Die Walküre with the Metropolitan Opera; Tristan in Wagner’s Tristan und Isolde at L’Opera Bastille in Paris; and the lead role in Verdi’s Otello with the Teatro alla Scala in Milan, among many others. His most recent performance was Otello with the Korean National Opera in November.

“Meadows at the Meyerson is the embodiment of our values as an arts organization in the community. We present the critically recognized Meadows Symphony Orchestra in our city’s Arts District and raise money for scholarships to bring even more talented students from around the world to Dallas,” said Sam Holland, dean of the Meadows School of the Arts. “We are especially delighted this year to honor Caren Prothro, long a champion for arts and cultural excellence in our city. We are also grateful for her longstanding support of the Meadows Scholars Program, which allows Meadows to compete with the top arts and communications programs in the U.S., attracting prospective students to Dallas who might otherwise wind up in Boston, New York, Chicago, or L.A. Many of these academically gifted artists, or ‘smartists’ as we like to call them, will choose to stay in Dallas after graduation, building Dallas’s intellectual capital and momentum as one of the most culturally dynamic cities in the U.S.”

Event honoree Caren Prothro is an active supporter of the arts, higher education and programming addressing the needs of at-risk youth. She is past chairman of SMU’s board of trustees and current co-chairman of SMU’s “Campaign for the Second Century” with a historic goal of $1 billion supporting endowment and capital expansion. She served as vice chairman of the board of the Dallas Center for the Performing Arts from 2001 to 2010, now the AT&T Performing Arts Center, and chaired the development committee, raising over $330 million towards the construction of the Winspear Opera House, Wyly Theater, Sammons Park and Strauss Artists’ Square. From 2001 to 2008 she served on the President’s Committee on Arts and Humanities. In 2009, she co-chaired the campaign to construct the new Letot Girls’ Center, a long-term counseling and residential center supporting victims of trafficking and abuse; her involvement in the establishment of Letot Center in 1990 was an outgrowth of her Junior League placement at the Dallas County Juvenile Department. Ms. Prothro has been the recipient of many awards, including the TACA Silver Cup Award, the Boys and Girls Club’s Robert H. Dedman Award for Philanthropy, the J. Erik Jonsson Ethics Award, the Linz Award, and the Southwestern Medical Foundation Charles Cameron Sprague Community Service Award. She is past chairman of the Dallas Salvation Army advisory board and of the board of governors of the Dallas Foundation. She currently serves on the boards of The Hoblitzelle Foundation, Southwestern Medical Foundation and The Letot Capital Foundation. In 2015, she will begin her service as a member of The George W. Bush Foundation.

The Meadows Scholars program was inaugurated in 2008 to recruit the brightest and most talented students nationwide to the Meadows School of the Arts, and is targeted to applicants who are accepted to Meadows and who meet both stringent academic and artistic/leadership criteria. While such high achievers automatically receive SMU academic scholarship awards, many of them are still unable to afford full tuition. The Meadows Scholars program offers an additional annual scholarship, plus an exploration grant that can be used anytime during their years at Meadows for a creative project, providing a significant incentive for them to choose SMU and Dallas. The program has greatly helped SMU compete successfully against such schools as Northwestern, Juilliard and Yale for top creative talent.

Tickets to the Meadows at the Meyerson concert are $25 for adults, $20 for seniors, and $17 for students and SMU faculty and staff. A $10 discount is available for subscribers. For tickets, contact the Meadows Box Office at 214-768-2787.

For SMU alumni, a concert ticket that includes a post-concert dessert and champagne reception is available for $100, or $50 for young alumni (classes of 2004-14); a large portion of the ticket price supports student scholarships. Call the Meadows Development Office at 214-768-4189 for alumni ticket information.

Patron and corporate sponsorships with special benefits and seating packages are available from $1,500 - $30,000. In addition, the Meadows Scholars level recognizes those who either permanently endow a Meadows Scholar at $150,000 or who make a $30,000 commitment to fund an individual Meadows Scholarship over four years. For more information, call the Meadows Development Office at 214-768-4189.