Concert will include world premiere of Wang’s "Tibet Fantasia" 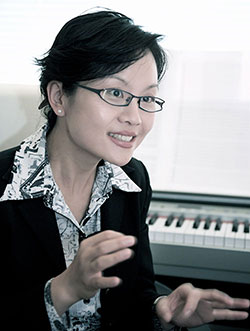 Voices of Change, Dallas’s renowned professional new music ensemble, will feature works by award-winning composer and Meadows associate professor Xi Wang in their concert at 3 p.m. Saturday, March 14 at Dallas City Performance Hall. Voices of Change will perform two pieces commissioned from the composer: Echo. Poem. Image., composed in 2010, and the world premiere of Tibet Fantasia. Both pieces incorporate dramatic lighting, and the former features a display of dancers and image projections reminiscent of the spectacle of Beijing opera. The commission of Tibet Fantasia was made possible with support from the TACA Donna Wilhelm New Works Fund.

A free pre-concert forum will be held at 2 p.m. with program annotator Laurie Shulman and the composer.

Xi Wang joined the SMU faculty in 2009 and teaches composition and music theory. She won a MacDowell Colony Fellowship in 2011, was one of two national recipients of the Charles Ives Fellowship from the American Academy of Arts and Letters in 2012 and won the national Pi Kappa Lambda Commissioned Music Project competition in 2013. She has also received awards from Meet the Composer, the National Endowment for the Arts, the American Music Center and ASCAP.