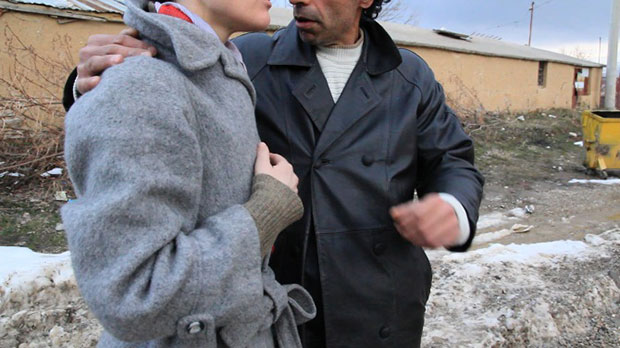 Mary Walling Blackburn, Son and Father, Konya, Turkey, 2012; video still; image courtesy of the artist. (Here, we perform together, the father and son encountering a UFO. I am the father and he is the son.)

Meadows School of the Arts and Austin-based arts magazine Pastelegram are collaborating on a newly launched online publication, Coronagraph, that features in-depth interviews between art thinkers and practitioners.

“We wanted to create a platform that would allow for deeper conversation about artistic practice, one that links Texas with national and international artists and writers and draws from the pool of faculty, students and alumni from SMU and the University of Texas at Austin,” said Noah Simblist, chair of SMU’s Division of Art. “We also wanted to create a site that was unafraid to be too esoteric, theoretical or political, areas of discourse that are rare right now in Texas.”

Three interviews have been posted initially, two of which feature Meadows faculty members. Noah Simblist conducts an interview with Kader Attia, discussing themes such as modernity, quantum physics, self-scarification and colonialism in Attia’s 2014 installation, Injury Continuum, at Artpace in San Antonio. New York-based artist Andres Laracuente interviews Meadows Assistant Professor of Art Mary Walling Blackburn about her work and travels and what it means to be a “stranger.”

The third interview features a conversation between Carol Cheh of the Japanese American National Museum in Los Angeles and artist Asher Hartman, discussing Hartman’s history in experimental theatre, his work at the arts storefront Machine Project and his influences and other performance art in southern California.

Pastelegram, a nonprofit arts organization based in Austin, Texas, provides a method for examining contemporary visual work by looking at various sources that have affected a work’s creation. Pastelegram publishes a print annual and an array of internet projects.

It focuses on projects that explore artists’ archives and artistic processes by cultivating new works from living artists and maintaining online collections of artistic working materials.