Complex Movements and Lear deBessonet Will Each Receive $25,000 and Artistic Residency at Meadows School 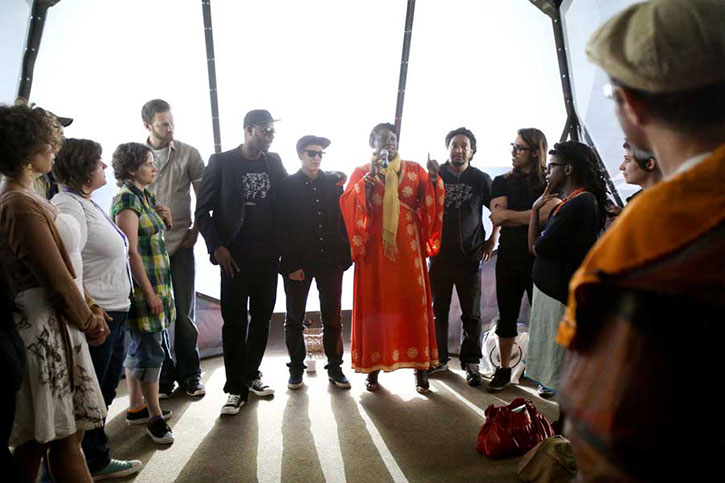 The Meadows School of the Arts at Southern Methodist University has announced the recipients of its sixth annual Meadows Prize arts residency: the Detroit-based artist collective Complex Movements and Lear deBessonet, the director of The Public Theater’s Public Works program in New York City. The Meadows Prize is awarded to pioneering artists and creative professionals who are active in one or more disciplines represented by the academic units within the Meadows School.

Complex Movements is a Detroit-based artist collective developing interactive performance work that illuminates connections between complex science and social justice movements to support the transformation of communities. Complex Movements is comprised of graphic designer/fine artist Wesley Taylor; music producer/filmmaker Waajeed; lyricist/organizer Invincible; and multimedia artist/performance systems architect Carlos Garcia. Their work draws on multiple disciplines, including community organizing, design, music, architecture, storytelling, multimedia art and theater. For their Meadows Prize project, Complex Movements will collaborate with the Dallas community and Meadows School on a week-long residency in February, and return in October for a four-week engagement of Beware of the Dandelions in Dallas’s Fair Park.

Beware of the Dandelions is a performance-based installation that also functions as a workshop space and a visual arts exhibition. Participant activity occurs inside a 400-square-foot polyhedron pod structure designed in collaboration with Detroit-based architect Aaron Jones to create an immersive visual and sound experience. Beware of the Dandelions is built upon an original science-fiction parable about a post-apocalyptic community trying to create change and is told through projections, music and interactive elements. Components of the installation are shaped and co-presented by a cohort of Dallas community members to give the work a unique local resonance. The cohort touring model is designed in collaboration with cultural strategist and Beware of the Dandelions producer Sage Crump. Through community collaboration and the interdisciplinary nature of Beware of the Dandelions, Complex Movements seeks to raise the visibility of local issues and social justice-based art and activism. 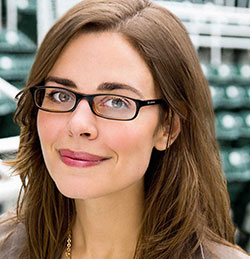 Lear deBessonet is director of Public Works – a major initiative of The Public Theater that engages the people of New York as theater creators as well as spectators. Working with community partner organizations in all areas of the city, Public Works invites members of diverse communities to participate in theater workshops, attend classes and productions, and become involved in the daily life of The Public. Under deBessonet’s leadership, Public Works deliberately blurs the line between professional artists and community members, creating theater that is by and of the people. For her Meadows Prize project, deBessonet will spearhead a new co-production between the Meadows School and the Dallas Theater Center of The Tempest, to be developed for spring 2017. Lear’s first visit to Dallas will be spring 2015. This co-production marks a new form and scale for a Meadows Prize project and will engage hundreds of volunteers, community partners from across Dallas, and the institutional collaboration and alignment between SMU, The Public Theater and the Dallas Theater Center. DeBessonet’s first iteration of The Tempest was a 2013 Public Works production, in conjunction with a number of community organizations, featuring more than 200 New Yorkers on stage, many with little or no acting experience.

The Meadows Prize is part of the Meadows School’s work in art and urbanism, led by Clyde Valentín, former executive director of the New York City-based Hip-Hop Theater Festival. The purpose of this new initiative is to create and build programs that combine the arts and community engagement in Dallas, allowing students and others to immerse themselves in the city and engage with community members and arts institutions to create art collaboratively. The goal is to encourage people to create a cultural energy that supports Dallas – home to the nation’s largest urban arts district – and its growth as a nationally recognized arts center.

“Through their grassroots, community-based, and interdisciplinary nature, the projects proposed by Complex Movements and Lear deBessonet perfectly reflect the distinctive values of the Meadows School’s initiatives in arts and urbanism,” said Valentín. “Both projects are unwavering in their commitment to community and to fostering access and equity to art making, while also redefining the use of space as creative place-making.”

“This is a magnificent opportunity to make connections between communities in Dallas and Detroit, and nurture an exchange of stories, strategies and innovative creative methods to address both of our cities’ most pressing crises,” said Complex Movements’ Wesley Taylor. “Complex Movements is excited to listen to, learn from and collaborate with Dallas communities. It is an honor to receive the prize and follow in the legacy of other social justice-committed artists who were prize winners such as Jawole Zollar, founder of New York City’s Urban Bush Women.”

“My career has been fueled by the combination of my passions for both social justice and theater, and with Public Works, we’ve been able to create works of theater that speak to and directly engage a broad public,” said Lear deBessonet. “It’s so thrilling to see these same passions embodied by the work of the students and faculty at the Meadows School, and I’m very excited to work in partnership with not only Dallas’s arts institutions but more importantly its citizens to create a new project for the city.”

Inaugurated in October 2009, the Meadows Prize is presented annually to up to two pioneering artists. It includes support for a residency in Dallas, in addition to a $25,000 stipend. In return, recipients are expected to interact in a substantive way with Meadows students and collaborating arts organizations, and to leave a lasting legacy in Dallas, such as a work of art that remains in the community, a composition or piece of dramatic writing that would be performed locally, or a new way of teaching in a particular discipline.

Artist bios and additional background on the Meadows Prize follow.

Lear deBessonet is the director of Public Works at The Public Theater. She directed Good Person of Szechwan for The Foundry Theatre and The Public Theater (Obie Award, Lilly Award, Drama Desk nomination, Lortel nomination), and has directed Public Works’ productions of The Tempest and The Winter’s Tale at the Delacorte (each featuring over 200 New Yorkers from all five boroughs). Her previous large-scale projects include an original musical adaptation of The Odyssey at the Old Globe in 2011 (featuring professional artists alongside 181 San Diegans) and Quixote, a collaboration with homeless shelter Broad Street Ministry and the punk gypsy band Psalters in Philadelphia in 2009. Other directing credits include Sherie Rene Scott’s Piece of Meat at 54 Below, On the Levee for Lincoln Center Theater/LCT3 (Time Out Best of 2010), a country/bluegrass version of Saint Joan of the Stockyards with Kelley McRae (PS122), Toshi Reagon and The Big Lovely’s Lines (NEA commission, Joe’s Pub), Takarazuka (Clubbed Thumb), Monstrosity (13P), The Scarlet Letter with fiddler Todd Reynolds (Intiman Theatre), transFigures (Women’s Project), In the Dark Ages (National Opera Theatre of Kazakhstan) and When I Was a Ghost (Guthrie Theater). For Ten Thousand Things in Minneapolis, she directed productions of My Fair Lady, As You Like It and The Music Man that toured to prisons, community centers and homeless shelters. She created and ran the Tickets for the People program in New York, an initiative to distribute tickets to non-traditional theatergoers including immigrants, students and seniors. She has been honored as one of Crain’s “40 under 40” and Time Out New York’s “25 People to Watch,” and she was honored with LMCC’s Presidential Award for Artistic Excellence. A recipient of an NEA/TCG Career Development Program for Directors, she has also served as a visiting professor at NYU-Tisch School of the Arts.

The Meadows Prize replaced the Meadows Award, which was given annually from 1981 to 2003 to honor the accomplishments of an artist at the pinnacle of a distinguished career. Meadows Prize recipients must be pioneering artists and scholars active in a discipline represented by one of the academic units within the Meadows School: advertising, art, art history, arts management and arts entrepreneurship, communication studies, dance, film and media arts, journalism, music and theatre.

ABOUT THE MEADOWS SCHOOL OF THE ARTS

The Meadows School of the Arts, formally established at SMU in 1969 and named in honor of benefactor Algur H. Meadows, has achieved prominence as one of the foremost arts education institutions in the United States. It offers undergraduate and graduate degrees in advertising, art, art history, arts management and arts entrepreneurship, communication studies, creative computation, dance, film and media arts, journalism, music and theatre. The goal of the Meadows School of the Arts is to prepare students to meet the demands of professional careers, as well as to provide opportunities for all SMU students and the broader Dallas community to grow in the understanding and appreciation of the arts.

While maintaining the highest level of craft in all of its disciplines, the Meadows School aims to be the most innovative arts and communications school in the country, developing new curricular initiatives including the first master’s degree in international arts management and a number of interdisciplinary minors such as arts entrepreneurship. The Meadows School is a leader in developing pioneering outreach and community engagement programs, challenging its students to make a difference locally and globally by developing connections between art, entrepreneurship and social change. For more information, visit www.smu.edu/meadows.