Concert in Caruth Auditorium will feature music of Kurt Weill, Monteverdi and others “The President’s Own” United States Marine Band Brass Quintet from Washington, D.C., will give a free concert at 8 p.m. Tuesday, February 10 in Caruth Auditorium in SMU’s Owen Arts Center, presented by the Meadows School of the Arts. The program will include Kurt Weill’s Suite from The Threepenny Opera, Monteverdi’s Four Madrigals, Darius Milhaud’s Suite française and more.

The group members, including Master Gunnery Sgt. Matthew Harding, cornet; Master Sgt. Michael Mergen, trumpet and cornet; Gunnery Sgt. Hilary Harding, horn; Master Sgt. Chris Clark, trombone; and Gunnery Sgt. Christopher Tiedeman, tuba, have been performing as a brass quintet from “The President’s Own” U.S. Marine Band for more than 10 years. The quintet has given recitals at the Midwest Clinic in Chicago, the Texas Music Educators Association convention, and most recently, the International Trumpet Guild convention, where they gave the world premiere of James Stephenson’s “Chase Sequence.”

They also have provided educational outreach in the form of master classes and clinics at universities throughout the country, including the University of Michigan in Ann Arbor; Northwestern University in Evanston, Ill.; The Juilliard School in New York; the New England Conservatory in Boston; the University of North Texas in Denton; and many others.

“The President’s Own” United States Marine Band’s mission is to perform for the president of the United States and the commandant of the Marine Corps. Founded in 1798 by an act of Congress, the Marine Band is America’s oldest continuously active professional musical organization. Among other roles, it has performed at every presidential inauguration since Thomas Jefferson’s in 1801. Today, “The President’s Own” is celebrated for its role at the White House and its dynamic public performances, which total more than 500 annually.

The Owen Arts Center is at 6101 Bishop Blvd. on the campus of SMU. Concert admission is free, and no tickets are needed. For more information, call the Meadows School Division of Music at 214-768-1951.

Cornetist Master Gunnery Sergeant Matthew Harding of North Dartmouth, Mass., joined “The President’s Own” United States Marine Band in September 1998 and was appointed solo cornet in January 2000. Harding earned a bachelor’s degree in music from the Eastman School of Music in Rochester, N.Y. in 1996 and has completed one year of master’s-level study at Rice University in Houston. He has studied with John Martin of Boston, Charles Geyer of Eastman and the late Armando Ghitalla. Prior to joining “The President’s Own,” Harding spent a year with the New World Symphony in Miami; toured Japan with the Eastman Wind Ensemble; and performed at the Aspen Music Festival in Colorado, Chautauqua Music Center in New York and Walt Disney World in Orlando. He also was a fellow at the Tanglewood Music Center in Lenox, Mass.

Trumpeter/cornetist Master Sergeant Michael Mergen of Lebanon Township, N.J., joined “The President’s Own” Marine Band in May 1999. He earned a bachelor’s degree in music performance and education from the University of Michigan in 1996, a master’s in music performance from the Eastman School of Music in Rochester, N.Y., in 1998 and a doctorate in trumpet performance from The Catholic University of America in Washington, D.C., in 2009. His instructors included the late Armando Ghitalla, Charles Daval and Charles Geyer. Prior to joining “The President’s Own,” Mergen performed with the Singapore Symphony in the Republic of Singapore and the Harrisburg Symphony in Pennsylvania and was a fellow at the Tanglewood Music Center in Lenox, Mass.

French horn player Gunnery Sergeant Hilary Harding of Princeton, Ky., joined “The President’s Own” Marine Band in May 2003 and was appointed assistant principal horn in October 2012. She earned a bachelor’s degree in music from the University of Illinois at Urbana-Champaign in 2000, a master’s in music from the Peabody Institute of The Johns Hopkins University in Baltimore in 2002, and a doctorate of musical arts in 2007 from the University of Maryland, College Park. Her horn instructors included Martin Hackleman of the National Symphony Orchestra in Washington, D.C., Peter Landgren of the Baltimore Symphony Orchestra, and Kazimierz Machala, formerly of the Sydney Symphony in Sydney, Australia.

Trombonist Master Sergeant Chris Clark of Commerce, Texas, joined “The President’s Own” Marine Band in August 1999 and was appointed section leader in 2008. He began musical studies at age 11 with his father, Jimmy Clark, principal trombone of the Dallas Opera. He earned a bachelor’s in music from the Curtis Institute of Music in Philadelphia in 1995, where he studied with Glenn Dodson, a former member of the Marine Band and principal trombone of the Philadelphia Orchestra. In 1997, he earned a master’s degree in music from The Juilliard School in New York where he studied with Joseph Alessi, principal trombonist of the New York Philharmonic. Clark earned his doctorate in musical arts from The Catholic University of America in May 2009, where he studied with David Fedderly.

Tuba player Gunnery Sergeant Christopher Tiedeman of Tacoma, Wash., joined “The President’s Own” Marine Band in May 2002. He attended the Eastman School of Music in Rochester, N.Y., where he studied with Don Harry. He also studied with Ivan Giddings of Tacoma. Prior to joining “The President’s Own,” he won the International Tuba and Euphonium Conference’s Young Artist competition in 2000. 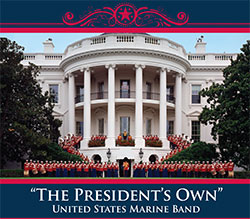