Virginia Dupuy has earned a reputation as one of the finest recital and concert singers in the United States. She has championed American music in recordings of the Grammy-nominated Voces Americanas, and she premiered the role of “Crone” in Conrad Susa’s opera Wise Women. Fanfare magazine hailed her recording of Dominick Argento’s Pulitzer Prize winner From the Diary of Virginia Woolf as one of the top classical recordings of the year.

Dupuy made her Lincoln Center debut with the American Symphony Orchestra at Avery Fisher Hall and has appeared with the orchestras of Pittsburgh, Phoenix, Dallas, Houston, Fort Worth, Eugene and Honolulu. A professor of music at SMU’s Meadows School of the Arts, she is a leading scholar and interpreter of music set to Emily Dickinson’s texts. Gasparo Records, Inc. released Dwell in Possibility, a CD of 24 Dickinson poems and one letter performed by Dupuy with Shields-Collins Bray of Voices of Change, set to music by her esteemed friends, including Jake Heggie, Lee Hoiby, Dan Welcher, Richard Hundley, Simon Sargon and William Jordan. She continued her performances of contemporary composers with Voices of Change and the Cliburn Modern Composers Concerts with the composers Adamo, Heggie, Ricky Ian Gordon, Golijov, Danielpour, Higdon and Bolcom present. She sang songs and duets, including texts of Sister Helen Prejean, with Jake Heggie at the Cliburn’s “Modern at the Modern” in Fort Worth with pianist and producer Shields-Collins Bray. She continues to perform “Emily Dickinson in Song” throughout the country.

Her student, tenor Juan de Leon, made his Metropolitan Opera debut in October 2013 and performs all over the world. Other Dupuy students have recently won regional Metropolitan Opera auditions and are apprentices at Santa Fe Opera, Glimmerglass, Wolf Trap, Chautauqua, Des Moines, Opera North and Los Angeles Opera. Dupuy also is the liaison and founder of the partnership for SMU graduate students with the Dallas Opera Educational Outreach for performances in schools and community centers in the Metroplex. These young professionals are also in master classes with singers at The Dallas Opera, including Lucas Meachem and Laura Claycomb.

Dupuy is in demand throughout the United States as a teacher of master classes. In spring 2016, she produced a workshop, “Strategies for Performing Contemporary Music,” for the Los Angeles NATS chapter on the campus of Loyola Marymount University. In 2010, she produced a symposium prior to the opening of the opera Moby Dick by Jake Heggie at the Winspear Opera House in partnership with The Dallas Opera, Meadows School of the Arts and the Texas Book Festival.

As a member of the company of Dallas-based “Voices of Change,” Dupuy performed songs and arias of Bernstein in October 2018 and Ravel’s Chanson Madécasses in January 2017. She will return to the Georgetown Festival of the Arts in early spring ‘22, performing songs of Copland.

Dupuy, along with colleagues Sara Romersberger (theater) and Kevin Gunter (music), produced SMU’s first for-credit Musical Theater course in spring ’21 during the pandemic. In spring ’22, dance artist-in-residence Mark Burrell will be added to that team as the course offers Chicago, open to all SMU students by audition.

Seen as an innovator at Meadows, Dupuy recognizes that providing opportunities for performance is an essential part of education for singers. She produces Broadway Anthems, an ensemble in great demand throughout the Metroplex. Thirteen singer/dancer/actors, half of whom play instruments, perform a variety of repertoire from Guys and Dolls to Hamilton. In ’21-’22 the ensemble includes a flutist, cellist, guitarist, tubist and percussionist. Their performances include a show at the Taos Cultural Institute. 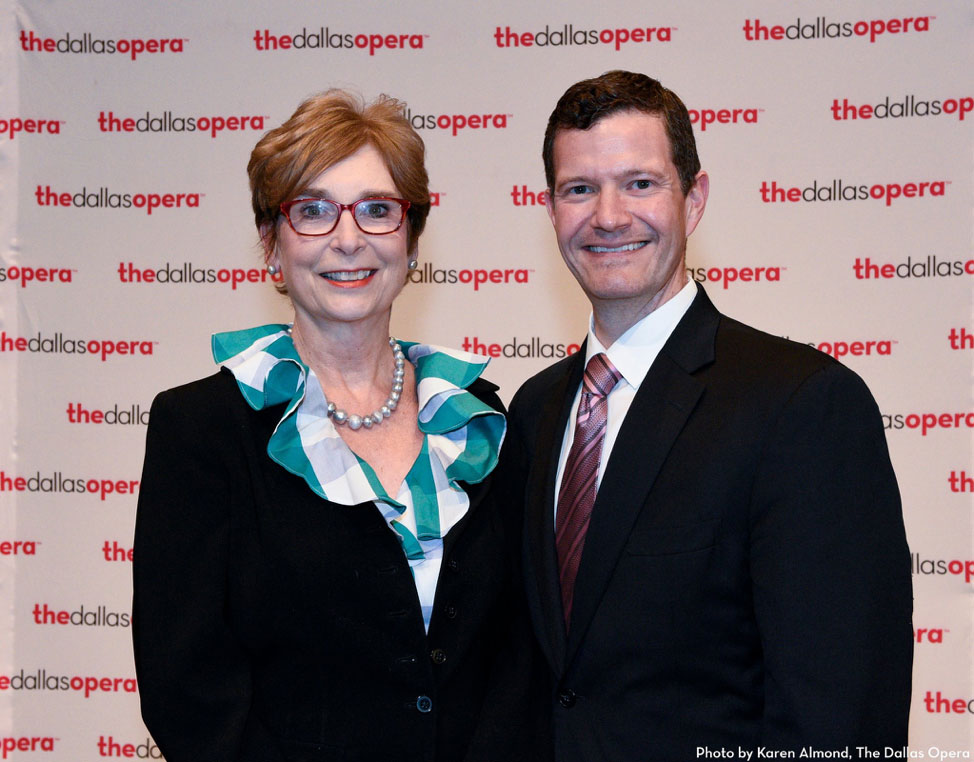 Former student Ian Derrer was named general director and CEO of The Dallas Opera in July 2018.

From the Diary of Virginia Woolf (Argento)

Songs for the End of the World (Benson) 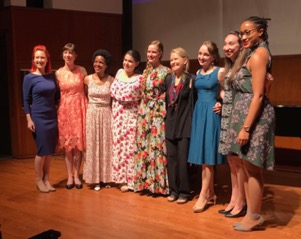 Master class with international soprano Cyndia Sieden (4th from the right) at SMU in October 2018. 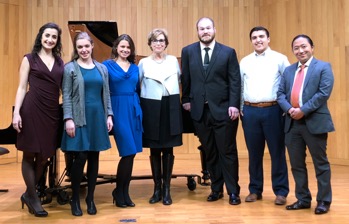