Director of Undergraduate Recruitment and Admission 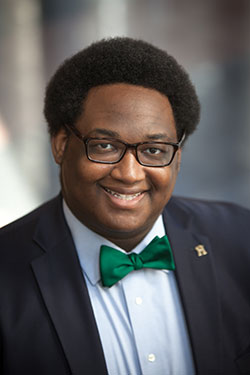 Originally from Houston, Ryan Cole built his musical foundation with the Houston Boychoir. He attended the High School for the Performing and Visual Arts and furthered his classical voice study as a member of the Houston Grand Opera High School Voice Studio.

His talent and passion brought him to SMU Meadows to pursue music education. As a student, he was very involved with several student organizations, sang with local church choirs and interned with the Children’s Chorus of Greater Dallas’s neighborhood choir in West Dallas. His commitment to music education in the community earned him the Roy and Sue Johnson Award in Memory of Maurice Acers. His senior year, Cole was awarded the “M” Award, the most highly prized recognition bestowed upon students, faculty, staff and administrators on the SMU campus. Cole worked as a middle school choir director in Plano ISD before his interest in student development and college access brought him back to SMU to work in undergraduate admission.

Cole earned a Master of Education in Higher Education/Policy and Leadership degree at SMU’s Simmons School of Education and Human Development, where he also served on the Young Leaders in Education board.

Cole has continued to sing through church, as an auxiliary chorister with the Dallas Opera, and at community events. He is thrilled to combine his love for the performing, visual, and communication arts, college access, and student success every day in his work at Meadows.