If you look at the arc of Mickey Dollens’ life so far, you can almost feel the syncopated rhythm of the opportunities he embraced and the hard knocks he survived.

His story starts with an unlikely football scholarship and his life-changing years at SMU. But just as Mickey’s chapter on the Hilltop was nearing an end, his brother’s suicide drove him to re-examine everything.

Mickey tried out for the NFL – and failed. But his attempt managed to earn this Oklahoma flatlander a slot on the U.S. Bobsled team. The life adventure continued after bobsledding with boom (and bust) in the oil business and a teaching job that he loved (and lost), before driving him to win a seat in the Oklahoma State Legislature.

It’s been a wild ride for someone only eight years out of college, but Mickey is the first one to tell you that SMU shaped him in ways he didn’t realize while he was on the Hilltop. And as you follow the twists and turns of his story, remember this: Mickey never quits.

FROM BARTLESVILLE TO DALLAS

Born in Bartlesville, a small town in northeast Oklahoma, Mickey was blessed with natural athletic ability. One journalist has described him as looking like the kind of guy who would rescue your cat from a tree – by uprooting the tree. But his high school football team was not blessed with a winning record. If he was going to attract the attention of Division I college coaches offering full ride scholarships, he’d have to do it on his own. Want to find out how he marketed himself to get the attention of SMU’s coaching staff? Read his book, Recruit Yourself: Earn a NCAA Football Scholarship.

Arriving at SMU in fall 2006 from a town of about 35,000 souls completely broadened his perspective and exceeded his expectations. Being around people from all walks of life “who made things happen” made him feel like he could make things happen.

“I loved getting to know my classmates. I met new friends at SMU from different parts of the world. One of my roommates was from India, and we still keep in touch today. So, SMU opened up my mind to different cultures, beliefs and possibilities.”

The professors he met while visiting had been a big decider for Mickey in choosing SMU. He majored in English with a creative writing specialization and minored in psychology. Anyone who has the brass to ask how that degree path has been relevant for a bobsledder-oilman-schoolteacher-turned legislator is going to get a pretty passionate response:

“When I first took a creative writing class with David Haynes at SMU, he taught me the importance and the structure of storytelling,” Mickey says. “And I took classes with Professor John Lewis, who taught us in-depth how to deconstruct a poem. Well, those things are applicable to things I do every day. Whether you are presenting a bill on the statehouse floor or debating, you can add a story to it. Or when we go through the hundreds and hundreds of bills we have to vote on, deconstructing a bill is exactly the same as deconstructing a poem.

“I didn’t know it at the time, but SMU was preparing me for everything that I am doing now – which is incredible!”

“I didn’t know it at the time, but SMU was preparing me for everything that I am doing now – which is incredible!”

Mickey had years of SMU football, friends and coursework he loved before the bottom fell out. He was only months away from graduating when his brother, who had a history of depression, died by suicide in January 2011.

“And at that moment, I needed my team more than ever,” he recalls.

His brother had always wanted Mickey to try out for the NFL, and Mickey knew he needed to expend some of the emotional energy he had built up in the wake of his brother’s death. He showed up for SMU’s Pro Day, where he did not impress the NFL, but did get recruited to the U.S. Bobsled team.

“I played defensive line at SMU, so I got pretty good at pushing things around. And it just so happens that my body type and my speed and my power were what they wanted. I ended up making the team and competing on Team USA for three years.”

The sport was violent, terrifying and very challenging – helping to fill the void left by his brother’s death and allowing him to build the kind of camaraderie he’d loved with the SMU football team.

Mickey says bobsledding “feels like being thrown down a freezing mountain in a dumpster going 90 miles an hour.” Hear the English degree with a creative writing concentration in that description? 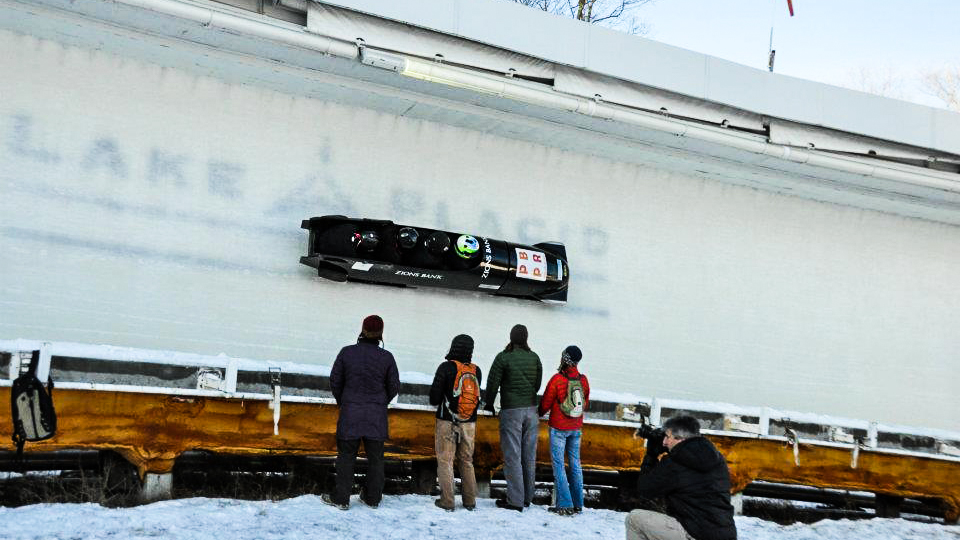 “(Bobsledding) Feels like being thrown down a freezing mountain in a dumpster going 90 miles an hour.”

FROM OILFIELDS TO THE CLASSROOM

When his bobsledding days came to an end, an old friend from SMU put Mickey to work in the Oklahoma oil fields. Mickey first met the SMU alumnus at the airport, rushing to catch a flight to Birmingham after missing the team’s charter flight earlier that day. The oilman, who played Mustang football in the 1970s, went to bat for Mickey. He convinced the coach to let Mickey play the game, despite missing the team flight, and told the young athlete to look him up when he was ready for a post-college job. He intended to teach Mickey the oil business from the ground up before making him a procurement manager. But the always-cyclical oil business was on the wane in Oklahoma, and after working a year in the field, the company stopped drilling. Mickey and most of his crew were let go and began looking for other jobs.

Mickey then parlayed his SMU English degree into a teaching job at a high school in Oklahoma City.

“U.S. Grant High School is a Title I school in South Oklahoma City. Many of the young people I taught came from tough backgrounds, and they were grateful for their educational opportunities. At times, it could be challenging, but overall it was a great feeling to connect with students and hopefully make a positive difference in their lives. I loved teaching so much that I bought a house right down the street from Grant High.”

But Mickey’s ride was about to take another twist: Within two years, Oklahoma cut millions of dollars in state education funding and about 800 teachers were furloughed across the state. Mickey was one of 19 let go at Grant High in the largest school district in Oklahoma.

Mickey knew what he had to do. With great clarity, he decided to channel his accumulated life experiences, his SMU degree, and his gift for storytelling to run for the Oklahoma state legislature. And like an Olympic bobsledder racing down a mountain trail, he decided to run as a Democrat in a Republican stronghold. Life and SMU had prepared him for the platform he would run on – public education, better mental healthcare for people like his brother, and economic diversification for an oil-dependent economy.

“I was on a mission. I had just enough money, and I went door-to-door to ask people what issues were important to them. I knocked on over 20,000 doors in my district, I hit 8,000 voters three or four times with my volunteers, and it ended up working out for us in 2016.” That’s a bit of an understatement: Mickey took almost 60 percent of the vote in the general election.

Mickey now splits his time between serving as a state representative in the Oklahoma Legislature and as executive director of the Energy Assist Foundation. The foundation is the nonprofit arm of the OKC Energy FC soccer team, which plays in the USL. The Energy Assist Foundation builds futsal courts in underserved areas across Oklahoma City, providing safe places for kids to play. The foundation also raises money for new soccer equipment to give to OKCPS schools and has begun offering mentorship and coaching for kids in underserved parts of the city.

Mickey still lives down the street from U.S. Grant High School with his wife and soon-to-be two kids. He frequently touches base with his former students and colleagues there as he fights for public education funding in the legislature.

“SMU prepared me for all things life has thrown my way,” Mickey says. “It opened my eyes to opportunities I didn’t know existed, and it empowered me with the knowledge, resources and networking to do everything I’m doing right now. I’m very grateful to be part of the SMU family.”