On December 2, SMU celebrated the groundbreaking of the Garry Weber End Zone Complex, the expansion and renovation project for Gerald J. Ford Stadium.

Part of SMU Ignited: Boldly Shaping Tomorrow, the University’s multiyear $1.5 billion campaign for impact, the new complex will enhance SMU’s campus and community by supporting competitive athletics and diverse programming that build civic pride. SMU’s latest investment in its century-long commitment to competing at the highest levels, the new complex will provide SMU’s student-athletes with dedicated spaces for development and team building while offering expanded and upgraded facilities for the Mustang community.

“For over 20 years, Gerald J. Ford Stadium has welcomed Mustang community members to celebrate the athletic and academic accomplishments of our University’s students,” said SMU President R. Gerald Turner. “Now, through the support of Garry Weber and his fellow donors, our beloved stadium will continue to drive excellence and growth in our student-athletes and inspire team spirit and excitement in our football fans.”

Through the support of Garry Weber and his fellow donors, our beloved stadium will continue to drive excellence and growth in our student-athletes and inspire team spirit and excitement in our football fans.

“I’m honored to be connected to this new chapter for SMU Athletics and the achievement and enthusiasm it stimulates across campus,” Weber said. “I look forward to joining my fellow Mustangs in cheering on our team in these new spaces that we have created together as a community.”

The groundbreaking also launched phase two of the project’s fundraising efforts, seeking to raise over $20 million to fund the new complex, which builds on a longtime legacy of excellence in SMU Athletics. Since its opening in 2000, Ford Stadium has come to represent athletic distinction and Mustang pride at SMU, creating a new tradition of tailgating dubbed “Boulevarding” along Bishop Boulevard. The stadium was made possible by and named for SMU Trustee Gerald J. Ford ’66, ’69, who was joined in fundraising by dedicated Mustang alumni, donors and community members.

“I am proud to be see the legacy of our beloved Mustang football stadium strengthened through the addition of the Garry Weber End Zone Complex,” said Ford. “The donors to this project are investing in the future of SMU Athletics and leaving a lasting impact on the lives of SMU’s student-athletes and community members.” 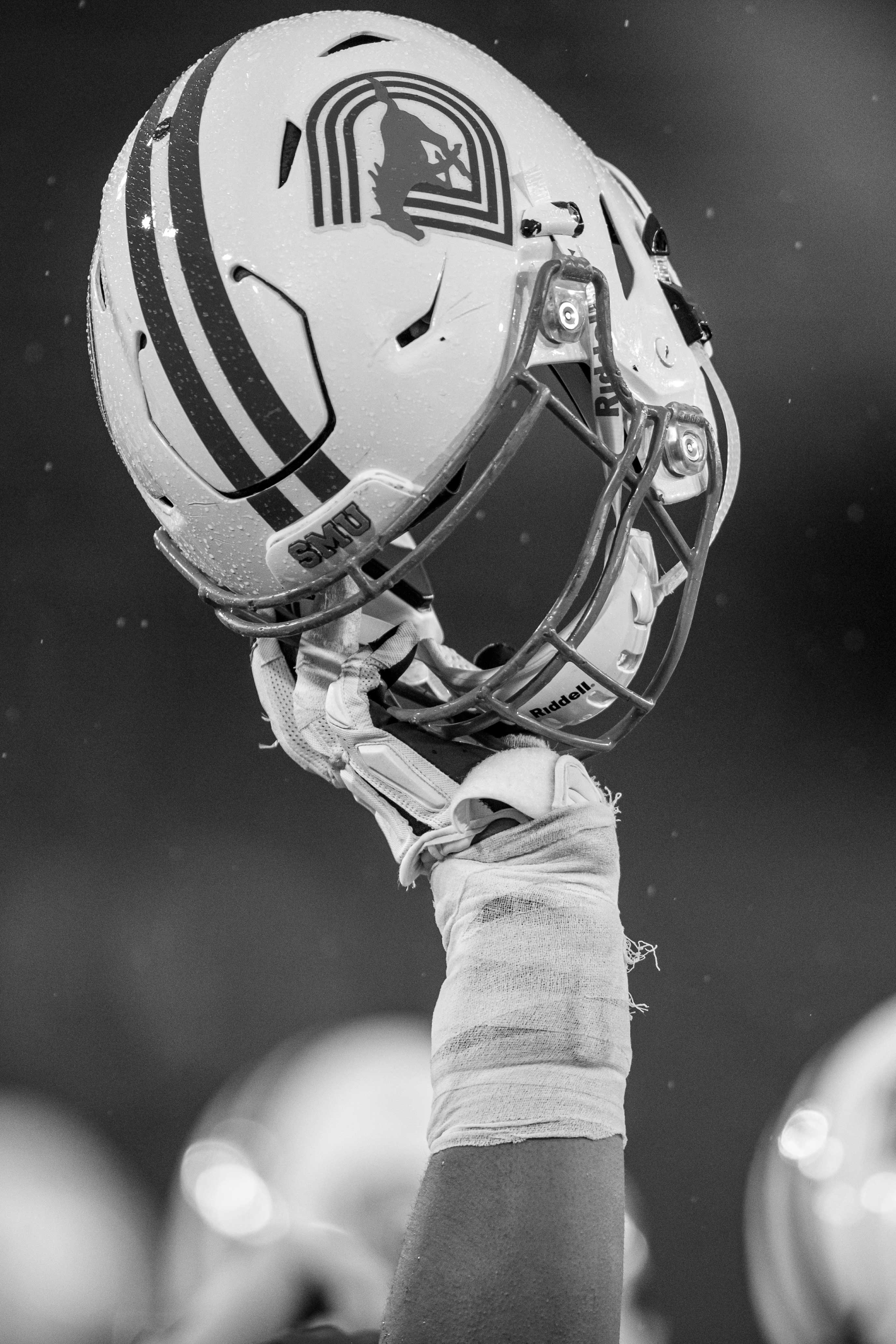 Housing SMU’s football coaches, support staff, and video and recruiting services, the three levels of the new complex will also offer team-focused facilities to support all of SMU’s 484 student-athletes. Spaces include new locker rooms, a weight room, position-specific meeting rooms, a full-team auditorium, and a kitchen and training table. Through the Garry Weber End Zone Complex, SMU will increase the functionality, efficiency and overall experience of Mustang football for student-athletes and fans, as well as inspire interest and investments in athletics across SMU’s campus.

“Through new additions like the Garry Weber End Zone Complex, SMU is continuing to gain momentum at the highest levels of collegiate athletics,” said Rick Hart, director of SMU Athletics. “Through their gifts to Mustang football and its student-athletes, our donors are laying the groundwork for personal, professional and athletic development at SMU.”

I look forward to joining my fellow Mustangs in cheering on our team in these new spaces that we have created together as a community.

With the groundbreaking of the new complex, SMU Athletics reaches a new milestone in its history with over $250 million invested in championship-caliber facilities since 2013. Through these and other gifts to the SMU Ignited campaign, the University is building on the generosity of its dedicated donors, the merit of its talented student-athletes and the spirit of its loyal Mustang fans.

“We are incredibly grateful for the generous contributions to the Garry Weber End Zone Complex,” said Brad E. Cheves, SMU vice president for Development and External Affairs. “Through our donors and their continued investment in the future success of our University, SMU will continue to encourage excellence on the field, in the classroom and beyond our campus.”

Through their gifts to Mustang football and its student-athletes, our donors are laying the groundwork for personal, professional and athletic development at SMU. 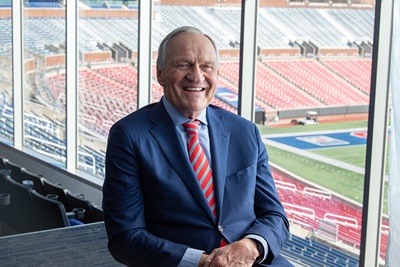 Proud graduate of the Edwin L. Cox School of Business, Garry A. Weber ’58 has been a member of the school’s Executive Board for over 30 years. A former member of the Mustang football team, Weber also served on the SMU Board of Trustees from 1984 to 1996. Having served Dallas as both a Dallas County judge and city council member, Weber is the founder of Weber Financial Inc., as well as an active individual investor in venture capital and late-stage hedge funds.

In 1998, Weber received the University’s highest honor, the Distinguished Alumni Award. In 2015, he was honored with the Silver Anniversary Mustang Award, the most prestigious award granted by the SMU Lettermen’s Association. In January, Weber committed $50 million to launch the drive for the Garry Weber End Zone Complex, the largest gift in the history of SMU Athletics.

An active presence at SMU and throughout Dallas, Weber has contributed generously to SMU and various educational and philanthropic causes, including Scottish Rite for Children, UT Southwestern, United Way and the Boy Scouts of America, among others. An avid outdoor and wildlife enthusiast, Weber has served on the council of advisors for the National Geographic Society, focusing his efforts on research, exploration and conservation. A member of The Explorers Club, Weber has also worked for over 20 years on the advisory council of the Whale Trust Maui, a nonprofit organization dedicated to scientific research and public awareness of whales and their environment. 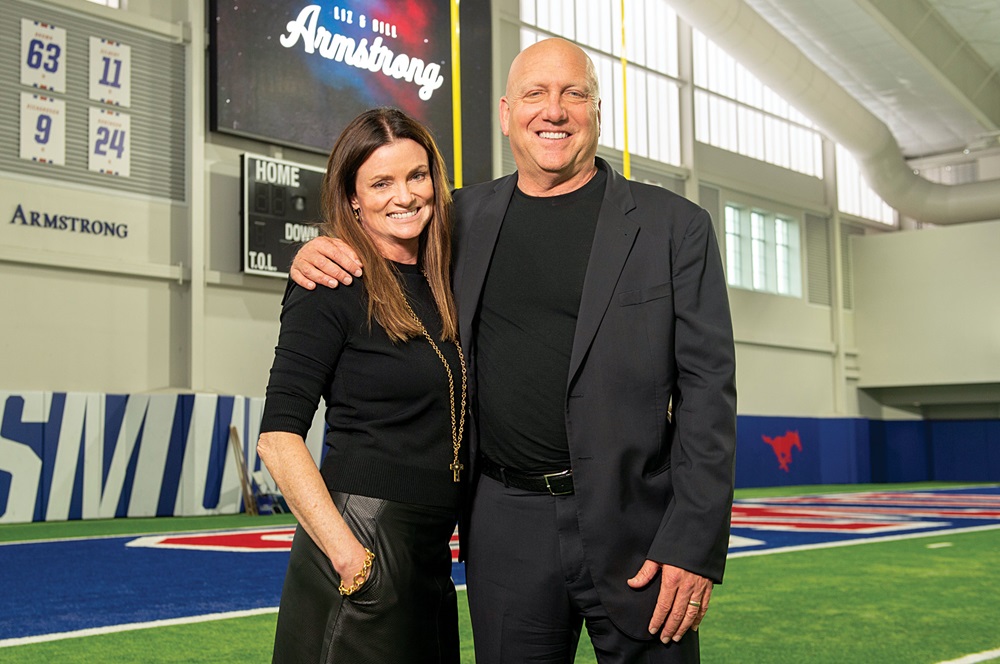 Founders and co-owners of Armstrong Oil and Gas and Epoch Estate Wines, Bill Armstrong ’82 and Liz Martin Armstrong ’82 met as geology majors at SMU. While at SMU, Bill Armstrong was a member of Phi Gamma Delta fraternity, the Honor Council and the Phi Beta Kappa Society. Liz Armstrong served as treasurer of Pi Beta Phi and performed in Pigskin Revue and Parents’ Weekend with its song group. She also served as an AARO, or orientation, leader. Both attended geology field camp at SMU-in-Taos, where they fell in love and later provided the funding for Casita Armstrong.

Recipients of the 2021 Distinguished Alumni Award, the Armstrongs are among three generations of family to attend the University – including their daughters, Lindsey Strawn ’10 and Leigh Young ’11 – and their investments across the campus reflect their commitment to enhancing the student experience. In 2011, they were the first to commit toward the construction of Armstrong Commons, a cornerstone of SMU’s living-learning community. More recently, they made possible Armstrong Fieldhouse, the primary component of the Indoor Performance Center. A passion for ballet led them to fund the Armstrong Visiting Artist-in-Residence in Ballet at Meadows School of the Arts during the 2020–21 academic year, and they also endowed a Dedman College Scholarship. In October, the couple gifted $5 million to endow and name the Elisabeth Martin Armstrong Dean within the Dedman College of Humanities and Sciences. 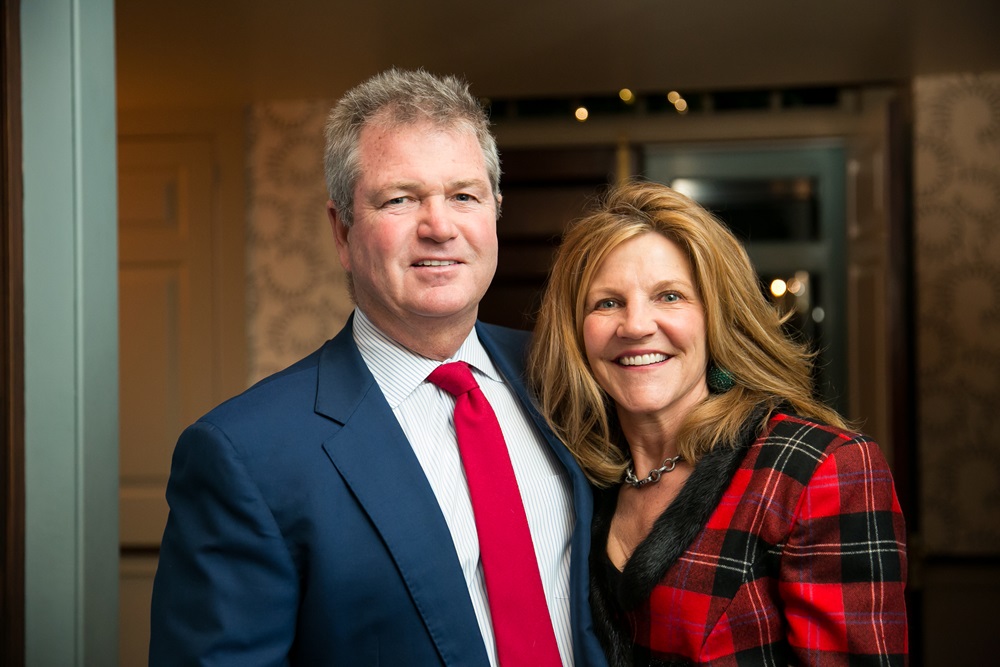 A 2019 recipient of the SMU Distinguished Alumni Award, Martin Flanagan graduated from SMU in 1982 with a bachelor’s in business administration from the Edwin L. Cox School of Business and a Bachelor of Arts in Ibero‐American civilization from the Dedman College of Humanities and Sciences. He currently leads Invesco Ltd., one of the world’s leading investment management companies. The company’s president and chief executive officer since 2005, Martin Flanagan also serves as a member of the board of directors and as vice chair and trustee of Invesco Funds. He was honored by the SMU Cox School of Business with a Distinguished Alumni Award in 2005 and an Outstanding Young Alumni Award in 1999. His long engagement with SMU includes currently serving as an SMU trustee, co-chair of the National Campaign Steering Committee for SMU Ignited: Boldly Shaping Tomorrow, and member of the Cox School of Business Executive Board.

Jennifer Flanagan also graduated from SMU in 1982 with a Bachelor of Arts in art history from the SMU Meadows School of the Arts. She is a community volunteer involved in charitable organizations across Atlanta. At SMU, Jennifer Flanagan served on the Atlanta Campaign Steering Committee for SMU Unbridled: The Second Century Campaign from 2008 to 2015 and on the Meadows School of the Arts Executive Board from 2009 to 2015. She has also volunteered her time to the SMU Mothers’ Club. As a student, she was a member of Kappa Alpha Theta sorority and participated in an SMU-in-France study abroad program.

The Flanagans’ efforts on behalf of the University extend to their home city of Atlanta, where they have hosted holiday parties for the SMU Atlanta chapter for over 10 years, including a special Atlanta kickoff celebration for SMU Ignited in December 2021. Both also have been active in the SMU Parent Leadership Council. 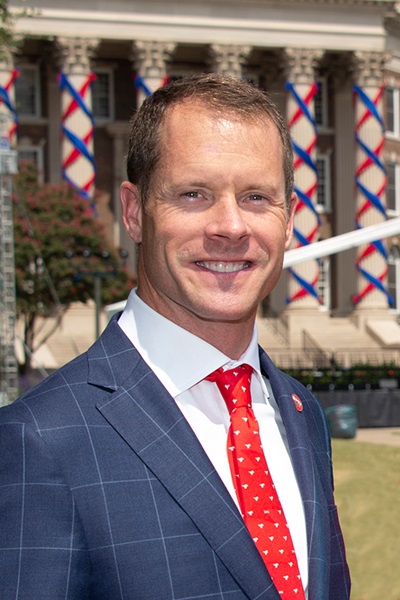 A graduate of the Meadows School of the Arts, William J. Ware earned his Bachelor of Arts in public affairs and corporate communications in 2001, also completing a minor in history from the Dedman College of Humanities and Sciences. Currently serving as the president of Amarillo National Bank, which was founded by his great-great grandfather, Ware is among the fifth generation of his family to manage the business. Under the Wares’ management and leadership, Amarillo National Bank continues to grow as a family-owned business focused on long-term stability, customer service and community support.

During his time at SMU, Ware was an active member of both the Sigma Alpha Epsilon fraternity and the Inter-Fraternity Council, which promotes the shared interests and values of its member fraternities, including leadership, service, brotherhood and scholarship. His longtime engagement with SMU includes his current service as chair-elect of the 21st Century Council and his recent service as co-chair for the Class of 2001 Reunion Committee. Additionally, Ware is a longtime member of the SMU-in-Taos Executive Board and is an active supporter of and presence at events for Ware Commons, named for his father and fellow alumnus, Richard Ware ’68.

SMU is the nationally ranked global research university in the dynamic city of Dallas. SMU’s alumni, faculty and more than 12,000 students in eight degree-granting schools demonstrate an entrepreneurial spirit as they direct change in their professions, communities and the world. Building on its history of excellence, the University has launched SMU Ignited: Boldly Shaping Tomorrow – a multiyear $1.5 billion campaign to empower outstanding students, to enrich teaching and research, and to enhance our campus and community.