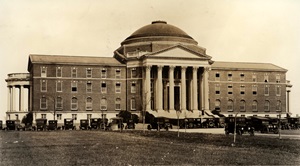 In 1992, the SMU Faculty Senate appointed an ad hoc committee to organize a day-long symposium for new and experienced faculty. The objective was to explore areas of excellence in teaching and to identify pitfalls and how to avoid them. The first Teaching Effectiveness Symposium was convened the week before fall classes in 1993.

The overwhelming response led the provost to appoint a 14-member Commission on Teaching and Learning early in 1994. Its charge was to coordinate issues on teaching effectiveness, faculty development and other related matters, and to recommend and implement policies pertaining to teaching effectiveness. Its membership included faculties from the several schools, a representative from the Learning Enhancement Center, and a graduate and undergraduate student. The provost was represented ex-officio.

Chaired by a faculty member, the Commission continued the symposium and has added additional forums, including an annual seminar for teaching assistants, as well as regular programs on issues related to pedagogy. The need for a more elaborate and formal structure became obvious as the Commission's focus broadened.

The University's Strategic Plan for 1996-2000 included, as its first goal, the enhancement of teaching and learning through faculty development, curricular review, and expansion of learning support for students. The first objective toward meeting that goal was the establishment of a Center for Teaching and Learning to support the faculty in pursuit of excellence in teaching. Toward that achievement, the Commission proposed that the center be named the Center for Teaching Excellence. The Commission, now Advisory Board, also created a mission statement, goals, and philosophy for the new center.

Approved by the administration and identified as a funding need in the Capital Campaign, the Center became a reality in the fall of 1997. Ron Wetherington, Professor of Anthropology, was named as its founding director.

In the years since the Center's founding, its activities have expanded. Most notably, in the summer of 2000 an Academy of Distinguished Teachers was created, along with the Altschuler Distinguished Teaching Professors Award. Four faculty members are selected each year to serve a two-year term.The Academy serves the academic community through the Center of Teaching Excellence by actively fostering the intellectual culture of the University by leading the Peer Feedback Program, by presenting forums to the SMU teaching community, and in many other ways.  Funding comes from a generous gift by former Chair of the SMU Board of Trustees, Ruth Altschuler.

In June of 2012, Professor Wetherington stepped down as director and the Provost appointed Beth Thornburg, Professor of Law, to become the Center's second Director.  In 2015 Michael Harris, Associate Professor of Higher Education, became the Center’s third director.