DALLAS (SMU) – Raleigh Dewan arrived at SMU weighed by personal experience with neurologic disease progression. After his grandmother was diagnosed with Parkinson’s disease, Dewan had witnessed the debilitating hand tremors that would not allow her to eat without spilling food everywhere, preventing her from enjoying with family the extravagant Southern dinners she lovingly prepared.

Now, SMU student partners Dewan and Mason Morland, and Emily Javedan, a Johns Hopkins student, are walking a creative and compassionate path as collaborators in a medical-tech startup named for its core product – SteadiSpoon™. It’s a self-stabilizing eating utensil that allows people suffering from disorders that cause shaking – such as Parkinson’s and essential tremors – to regain their ability to feed themselves with ease and dignity.

Their work has earned them thousands of dollars in seed money and invaluable mentoring at SMU, including through participation in 2021/22 Big iDeas Pitch and Business Plan Competitions, events that give undergraduates the opportunity to win financial support for socially conscious, problem-solving ventures.

SteadiSpoon™ was also just awarded a grant for $20,000 from VentureWell, which helps students advance their invention through a combination of funding, training, mentorship, and networking with peers and industry experts.

It is estimated that approximately 11 million Americans and 80 million people globally suffer from Parkinson’s or essential tremors. Disabling hand tremors can lead to depression, poor self-esteem and weight loss, all conditions that contribute to a patient’s decline.

“You know, for our entire team, this is not just an academic challenge, or a venture pushed to see if it could make money,” Morland said. “We really do feel that we are doing something good, and our efforts will change lives for the better. That recognition is a very big motivator – and a reward in itself.”

Dewan had grown up on film sets, watching his two older brothers – one a filmmaker and the other an actor – turn an idea into a script, a storyboard, and then into a movie. There, he’d also developed a fascination for the massive cameras that swung silently on motion-canceling gimbal joints to smoothly capture the exciting action scenes. Contemplating his 95-pound grandmother’s trembling hands, he wondered if this stabilizing film technology on a micro-scale might offer a pathway to create a spoon that stayed steady.

Pursuing marketing and creative writing degrees at SMU, Dewan began to research Parkinson’s disease and available eating-assist devices. He found weighted spoons with heavy handles and some motorized versions already on the market but saw them as prohibitively expensive and of limited efficacy. He began thinking about an affordable, mechanical solution that would solve tremors, and his first ideation of SteadiSpoon™ was developed in the entrepreneurship class of Simon Mak, professor of practice at SMU’s Cox School of Business. 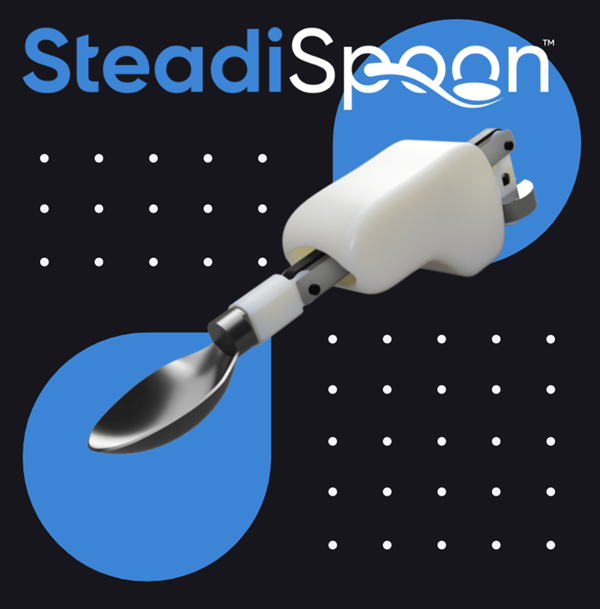 The Lyle School of Engineering helped to seed Dewan’s project. As a National Academy of Engineers’ Grand Challenge Scholar, he received $2,000 from a designated fund administered by the Hart Center for Engineering Leadership. A year later, Dewan also won a $5,000 grant for Best Technology Idea from SMU’s Hart Institute of Technology, Innovation and Entrepreneurship at the Big iDeas 2021 Fall Pitch Competition.

For the development phase of SteadiSpoon™, his SMU mentors referred Dewan to the University of Oklahoma’s Biomedical Engineering program for more specialized expertise, where he began working with OU engineers Jacob Nichols, Andrew Daniel, Ethan Trotter and Jiahua Mao to analyze possibilities and develop a motorized prototype and subsequent iterations. Dewan also worked with Kirsten Jefferys, who was OU Staff Project Manager.

SMU’s Technology Entrepreneur-in-Residence Bruce Snider served as Dewan’s mentor and contributed to the rapid trajectory of SteadiSpoon™ by walking him through the complex terrain of commercializing technologies, while also guiding the team to continually improve product design.

Bruce McIntyre, Executive Director of the Parkinson’s Foundation of Oklahoma, conducted a consumer research survey that helped SteadiSpoon™ home in on the target demographic, product pricing, and other factors. He also pointed the team to partners who could help get the SteadiSpoon™ solution to consumers.

Emily Javedan, a Johns Hopkins student who befriended Dewan at a Coca-Cola Scholars’ conference in 2019, joined the SteadiSpoon™ team in 2021. Javedan’s father is a board-certified neurosurgeon, and her acquired perspective on neurological disease, plus her science studies, business development and marketing talents, made her a valuable addition.

In fall 2021 Dewan approached SMU student Mason Morland to ask if he’d assume the role of Vice President of Operations for the fledgling business.

Dewan and Morland had enjoyed creative chemistry on a previous project, and quickly began to build a comprehensive business plan for SteadiSpoon™, with the goal of presenting it at SMU’s annual Big iDeas Competition in February 2022. After finetuning and encouragement from the Caruth Institute for Entrepreneurship at Cox School of Business, both the plan and Morland’s presentation impressed the judges, earning the team $5,000 in seed money.

A month later, Dewan and Morland pitched together for a win at the national Values and Ventures competition hosted by TCU. Judges looking for exceptional “conscious capitalism ventures that make a profit while solving a problem” granted them $7,500 for SteadiSpoon™.

The four spoon prototypes developed at OU use different proprietary mechanical mechanisms within the handle to negate the chaotic shaking motion of a user’s hand, which makes carrying food to the mouth a much easier process. Human trials at the OU Health Science Center’s motion capture lab tested Parkinson’s patients feeding themselves without assistance, and as they ate using SteadiSpoon™.

The trial showed that SteadiSpoon™ performed just shy of its target at 95% of the efficacy of the leading motorized solution, which is more expensive and requires regular charging. In addition, SteadiSpoon™ designs are 3D-printable, allowing for scalable production and charitable licensing in non-target developing countries.

Dewan’s grandmother passed away in 2021, but her story and spirit continue to inspire the project on every level.

As Morland shared, “We had a very tender moment at the TCU Pitch Competition when Raleigh was asked to speak about his grandmother and what it means to him to work on SteadiSpoon™.”