After 72 hours working feverishly to create a solution to an age-old problem, a group of developers won $10,000 and will be incorporated into a company for free.

The Southern Methodist University Bobby Lyle School of Engineering team took home the top prize at the 20 Over 20 hackathon for their solution that would help people track their possessions via their phone. 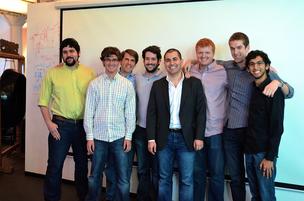 “Everyone was really excited,” said Greg Needel, SMU’s director of the Innovation Gymnasium who served as the team’s adviser. “But I think the vibe afterward was just tired.”

The team of five, comprising two sophomores, one senior and two grad students, worked tirelessly to form the idea, develop a business plan and create the product.

After Dialexa, host of the hackathon, presented participants with 20 problems plaguing society for 20 years, the team chose the problem they thought had the biggest commercialization potential, could be executed in the time frame, and would be fun to solve.

The solution they created uses tags that when prompted send high-frequency sound waves to a person’s smartphone, which uses an app called PingIt to function as a tracking device.

The team beat six other teams representing professional and academic entities, including teams from the University of North Texas and the University of Texas at Dallas, to win top prize provided by Dallas Venture Partners.

“I was really amazed by the creativity and the engineering power they all displayed in such a short time period,” said Matt Himelfarb, managing partner of Dallas Venture Partners. “This will be their first entrepreneurial foray so we’re not just going to write them a check; we’re going to try to support them.”

Needel said the team is still trying to make sure its product is the best it can be before considering its next steps.

“The product is sound, but there are things you do in 72 hours that you could probably do a little better with more time,” he said. “We’ve got to get ready for the whirlwind adventure that lies before us.”

The second place team from UNT developed a way for people to find their cars in a parking lot. Third place went to the SMU Guildhall, which created software that works with the Minecraft video game to create a psychological profile of its users based on their choices made during the game.

Another notable solution came from team Nerd Power, comprising developers from Dallas Makerspace, who created a bracelet that uses vibrations and small shocks to wake a person up without disturbing others. It can be used as a silent alarm clock with people who sleep with their spouses or as an aid for people suffering from narcolepsy, which affects one of the team’s members.