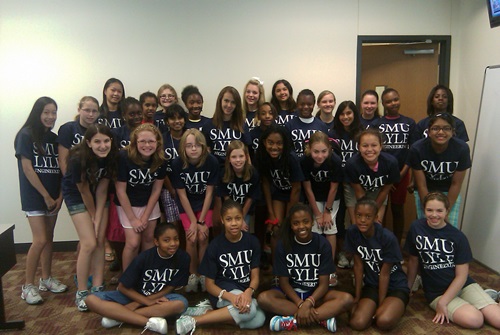 
“Keep an open mind” is the advice Jessica Steinmann had for this year’s middle and high school girls going through the June Southern Methodist University (SMU) Lyle School of Engineering Camp for girls. Steinmann, a 2007 graduate of Centennial High School in Frisco, is now a senior mechanical engineering and math major at SMU. She attended the Camp for Girls before her senior year in high school after a math teacher gave her a flier about it.

Steinmann is not the only girl who may benefit from an earlier exposure to engineering. According to a recent study by the National Engineers Week Foundation, only 8 percent of girls plan to pursue a career in engineering. The camp aims to break down gender barriers in an effort to produce more female engineers in the future. Because of a grant from the Texas Workforce Commission (TWC) and funding from Texas Instruments and Raytheon, the weeklong camp was free for participants.

Even if you don’t have an interest in engineering you should give it a try, because it gives you more options,” Steinmann said.

When Steinmann attended the Camp for Girls she worked on designing a computer programming project for people who are color blind. Although she does not come from a family of engineers, Steinmann said the camp helped her decide to pursue the career field, and she hopes to apply to graduate school and one day become an engineering professor. Now she works in an instrumentation and robotics lab performing experiments and analyzing data. See the rest of the story>>